The death toll from the explosion of the ten-storeyed apartment building in the city of Magnitogorsk has climbed to 21. Rescuers continue looking for bodies and possible survivors; it is believed that up to 21 people are still buried under the rubble. 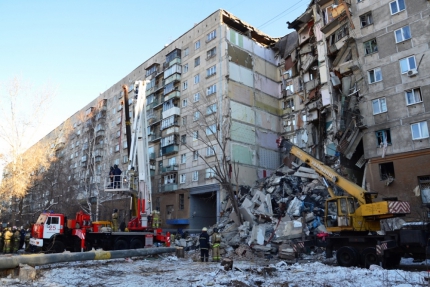 Twenty-seven people have been retrieved from under the debris so far with only six survivors among them, including two children. All of the survivors remain in hard, but stable condition, medics say. One of the survivors, a ten-month-old boy Ivan (Vanya) Fokin, who spent 30 hours under the rubble, was urgently flown to Moscow. The boy suffered a closed head injury, internal injuries, fractures, frostbite of the extremities and general hypothermia.

The body of the girl, whom rescuers found on the morning of January 2, has not been identified yet. She looks about three years old. It is believed that at least five more children are still buried under the debris.

A rescuer said that the walls of the apartment buildings may collapse further at any moment. A group of specialists always remains on the site of the explosion to estimate the situation and guide rescuers in their further work.

A part of the ten-storeyed apartment building Magnitogorsk collapsed in the morning of December 31. According to the official version, the section of the building collapsed as a result of a household gas explosion. However, local media reported that it could be a terrorist act. Reporters linked the collapsed building with a subsequent explosion of a GAZelle minibus, in which three people, supposedly terrorists, were killed. A special operation was carried out to capture them, but the criminals started shooting back. During the shootout, gas cylinders of the minibus exploded killing three. Another suspect managed to escape.

According to sources at law-enforcement agencies, a native of Central Asia rented an apartment in the building shortly before the New Year. The man was supposedly keeping explosives there and planned to commit a terrorist attack, presumably in a shopping center.

However, representatives of the authorities have denied any connection between the two explosions in Magnitogorsk. According to officials, no traces of explosives were found on the site of the tragedy.