The souvenir shop located on the website www.whitehousegiftshop.com has released a new item in memory of the meeting between US President Donald Trump and his Russian counterpart Vladimir Putin, which took place in Helsinki in July. The item is a coin with images and inscriptions in Russian and English languages. The Russian words on the coin contain several spelling errors. 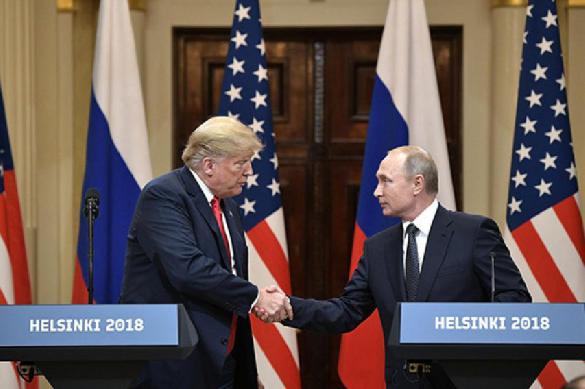 The coin is available on the website which is not an official store of the White House nor is it a store affiliated with the White House or any other government agency in the United States. The store is a privately owned company based in Pennsylvania.

The head side of the coin shows images of Russian and American presidents, coats of arms of the two countries and names of the countries in English - "United States of America" and "Russian Federation." There's also a Trump quote in English on the head side of the coin: "The past does not have to define our future." All English inscriptions do not contain any spelling mistakes.

On the reverse side, one can see the Cathedral of St. Nicholas in Helsinki, the dove of peace with the olive branch, the date of the meeting - July 16, 2018 - and several phrases in English (without spelling mistakes) and in Russian. The Russian phrases contain three errors (in six phrases). The word "дипломатическая" which translates as "diplomatic" is spelled with two d's in Russian. Other mistakes are about the wrong declension and misspelled words. There is a spelling error in the word Helsinki, which, if transliterated into English, would read as "Helpinski."

Surprisingly, the coin comes with a price tag of $100.

The Putin-Trump Helsinki Summit was held on July 16 in the capital of Finland. The two presidents talked for more than two hours before delegates joined them. As a result of the summit, Putin and Trump said that Russia and the USA made a big step forward.