Karolina Sevastyanova, 2012 Olympic champion in rhythmic gymnastics, commented on the riots in the United States that sparked after the killing of African-American George Floyd. She called the current events in the United States "chaos and lawlessness" as the rioters rob, loot and kill instead, but do not defend their rights. 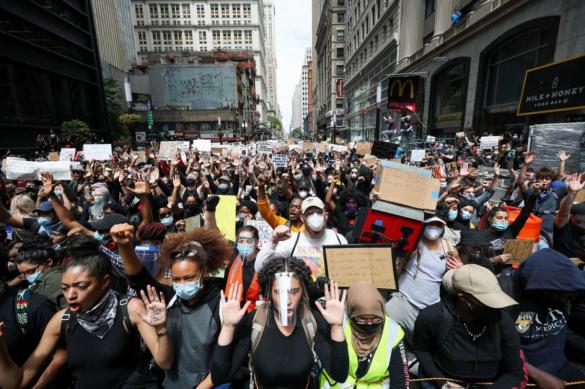 The 25-year-old athlete said that the events that have been happening in the US lately were "wild and incomprehensible" to her. She questioned the statements about the oppression of African-Americans in the USA, indicating that there are many influential and famous personalities among them.

"In the end, it all grew into absolute chaos and lawlessness, where people do not assert their rights, but simply ransack their cultural heritage, rob and kill people and did not even try to adequately express their position. Instead of trying to rewrite history now, encourage people for lawless actions heat up rage, one should have decided everything within legal framework and move on," she wrote.

"The Russians don't start harrassing the Germans when they see them. They could as WWII is still fresh in our memory. We had serfdom, which is identical to slavery. Yet, we do not do such things, we live our lives, we don't touch anyone, although how they treat us all over the world, they probably don't treat anyone else in such a biased way. Therefore, everything that's happening now is wild and incomprehensible to me," the athlete wrote on her Instagram account.

Removing Gone with the Wind is beyond insanity

Navka was outraged about the recent decision to remove American classic "Gone with the Wind" from HBO's streaming service. The channel assumed that there was racial prejudice in the 1939 film, which received eight Oscars, which was a record for those times.

"Many have already written about this, and I can't keep silent either! This is one of my favorite books and films. How can this be possible ?! This is insane! I can't find another word that against the background mass hysteria in the USA (yes, in my opinion, this is exactly the case as it has come beyond the limits of adequate protests and struggle for rights) HBO removed from the library the legendary film "Gone with the Wind"! Which extent of insanity does one need to reach to do that?" Tatiana Navka (45) wrote.

"As a person of balance, I'm always opposed to biased extremes, because any beautiful doing taken to the level of fanaticism is bad. The outcome will be negative as there will be nothing but regression instead of progress. I'm scared to even imagine what will be next .. "Tom Sawyer," "The Green Mile? " she added.