NATO not to let Greece out EU

The geopolitical importance of Greece will not allow it to leave the EU. It will also not be let to default due to economic considerations.

Dr. Faber, an editor of the Gloom, Boom and Doom report states that "it's about the ECB and European banks that have lent money to Greece and if Greece defaults would have to take a huge loss and write-off. So they will lend more money and kick the can down the road."

Of even greater significance is Greece's strategically vital location as a gateway between the Black Sea and the Mediterranean. It is this geopolitical factor which Faber believes will ensure that Greece is kept within the EU at any cost. For this reason he insists that Russia will never cede Crimea to the western powers.

The implication is that were the EU to cut Greece loose, Russia would be only too happy to step in and potentially project military power directly into Europe.

He goes on to highlight the new emerging geopolitical order where emerging powers China and Russia grow ever closer. There was plenty of Asian media attention on Premier Xi's visit to Russia.

Faber believes there is evidence that the global influence of the UK and the U.S. is in decline.

Dr. Faber notes that the EU will jawbone Greece until the eleventh hour in order to extract the best terms. Ultimately, however, they are left with little choice but to bail Greece out and postpone the inevitable for a little while longer.

Also read: Is there a way out of the crisis within EU? The case of Greece

Read more on the subject here

20:37
Nord Stream 2 evolves into major battle inside Germany
20:03
USA was one step away from recognising Crimea as Russia in 2014
00:05
The reasons of NAY
21:30
Belarus closes borders with Lithuania, Poland and Ukraine
20:44
EU calls for boycott, isolation and sanctions against Russia
17:00
Russia warns USA not to interfere in Belarus crisis
14:23
You scratch my back and I’ll scratch yours!
13:44
Easy ways to build strong business foundation
20:33
Coronavirus pandemic causes unprecedented economic decline since WWII
20:02
Russian nationalist Maxim Tesak found dead in detention centre
Europe
The reasons of NAY 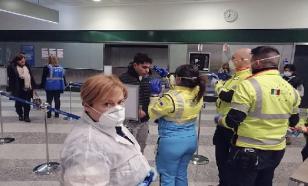