NATO: Built against USSR, doomed to lose battle against Russia

NATO does every effort to create enemies all over the world, although the bloc was originally created to contain aggression against sovereign states, an expert said. 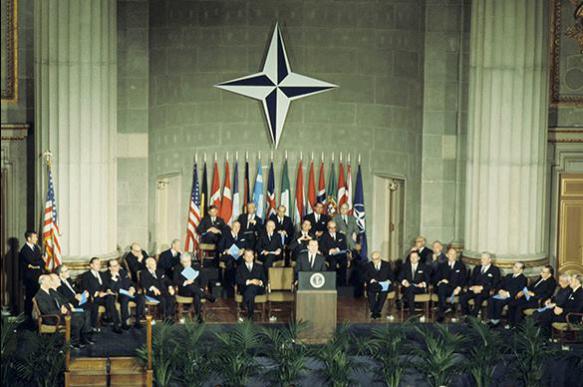 On 4 April 1949, NATO was established in the United States to "protect Europe from Soviet influence." NATO's prime enemy - the Warsaw Pact - no longer exists, but the bloc continues expanding.

Director of the Transnational Foundation Peace and Future Research Jan Oberg said that NATO was in fact the main aggressor in the world. He noted that NATO members are supposed to spend as much as two percent of their GDP on defense. In fact, there are only five countries that meet this requirement: the USA, the UK, Poland, Greece and Estonia. Showing resistance to Russia is the main justification for this spending.

Montenegro, Georgia, Macedonia and Bosnia and Herzegovina are expecting to become new members of the alliance. According to Oberg, NATO's constant expansion is aggressive.

"If NATO could just historically have stopped with what was its task it would maybe have been useful at least up to 1989. But when NATO countries or NATO as an alliance began to do things outside its own member states' territory, such as the destruction of Serbia, it is in my view gone. It is not a meaningful organization for collective defense or whatever when you go outside your own borders and your own mandate," Oberg told RT.

Not that long ago, US Supreme Allied Commander Europe General Philip Breedlove said that the US European Command (EUCOM) and NATO were prepared to "fight and win" against Russia "if necessary."