As many as 33 Turkish troops were killed as a result of the airstrike in Idlib province conducted by the Syrian Air Force, Anadolu news agency reports. Earlier, 29 victims of the Syria air strike were reported. The US supports Turkey in the Syrian conflict and believes that NATO should help Ankara stop the Syrian regime and Russia.

According to the Daily Sabah, Turkey destroyed a convoy of Syrian troops in the east of Idlib. According to the publication, the troops that were on the M-5 international highway came under fire.

Thirty-two Turkish soldiers were wounded and hospitalized. All of them are in stable condition. 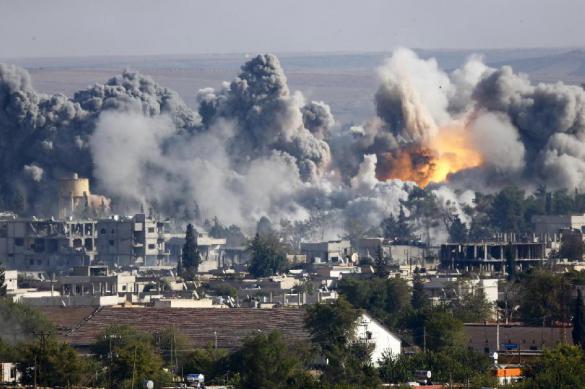 Spokespeople for the Russian Defense Ministry said that the Turkish military, who came under  fire of the Syrian troops on February 27, were among advancing militants. As noted, the Turkish military, according to the provided coordinates of their whereabouts, should not have come under fire of the Syrian forces. Aviation of the Russian Aerospace Forces did not strike the area of ​​the Syrian settlement of Behun, where Turkish soldiers were also killed.

Thus, according to available information, at least 34 Turkish citizens were killed in Syria on Tursday, February 27. According to social media, however, the number of victims exceeds 100.

Turkish President Recep Tayyip Erdogan held a meeting on security issues. Afterwards, Ankara carried out retaliatory strikes. Major Turkish Internet providers restricted access to Twitter, Facebook and Instagram on Thursday night. However, no official statements about the blockage of those services were made. It is believed that the services were blocked to stop the dissemination of sensitive information about the course of military operations.

Turkish Vice President Fuat Oktay said that the Syrian authorities would have to pay for the death of Turkish troops in the Syrian province of Idlib. "The head of the terrorist state (Syrian President Bashar - ed.) Assad, who will go down in history as a war criminal, and employees of his regime will pay a high price for this treacherous attack," said the vice president.

The Turkish Ministry of Defense reported a massive attack on the positions of the Syrian army. "As a result of the operation of combat aircraft, drones and artillery, more than 200 targets and objects of the [Syrian] regime were subjected to intensive attacks. Five helicopters, 23 tanks, ten armored vehicles were destroyed," Hulusi Akar, the head of the department said.

The minister pointed out that 309 troops of the Syrian army were neutralized, while the attacks of the Turkish Armed Forces in Idlib would continue in accordance with the plan.

Turkish Foreign Minister Mevlut Cavusoglu had a telephone conversation with NATO Secretary General Jens Stoltenberg. The Turkish authorities will hold consultations with NATO on the situation in Idlib on Friday morning.

Turkish officials believe that NATO was attacked in Syria because Turkey is a NATO member. Turkey expects NATO to take certain steps for the no-fly zone.

Ankara and Brussels had repeatedly discussed the possibility of coordinated action in Idlib. In addition, Turkey was considering deploying US-made Patriot anti-aircraft missile systems at its border with Syria. However, Washington has not made a decision on this subject.

US officials believe that Washington should help Turkey stop both the Syrian regime and Russia. US Ambassador to NATO Kay Bailey Hutchison set out a hope that the Turkish President would see who Turkey's reliable ally is.

On Friday night, when the news about casualties among the Turkish military became public, US Republican Senator Lindsay Graham called on US President Donald Trump to create a no-fly zone over Syria's Idlib.

"The world is sitting on its hands and watching the destruction of Idlib by Assad, Iran, and the Russians," Graham said.

Two days earlier, General Tod Wolters, head of the US European Command, said that cooperation against Russia was a long-term interest for both the United States and Turkey. According to the general, Turkey's role in countering Russia was fundamentally important.

Last Wednesday, Erdogan said at a meeting of the parliamentary faction of the ruling party that Ankara had no intention to make concessions on Idlib and would continue increasing its military presence in the Syrian province.

"The supporters of Bashar al-Assad must definitely retreat beyond the line of contact defined by the Sochi accords. The time given to Assad is running out," he noted.

The crisis in Idlib escalated in early February, when 14 Turkish citizens were killed in one week as a result of the actions of the Syrian army in Idlib. Recep Tayyip Erdogan blamed not only Damascus, but also Moscow. He demanded that Russia should stop the offensive of the Syrian pro-government forces in Idlib.