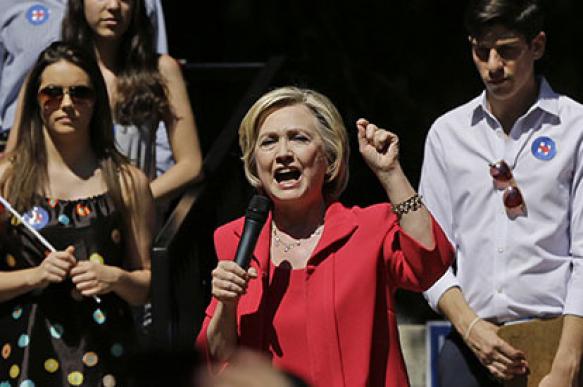 Jeff Bezos must want Hillary Clinton for president so badly. An article this week in his Washington Post claims that Vladimir Putin's super-hackers broke into the Democratic National Convention's (DNC's) computer network to steal dirt on Donald Trump! The evidence of the digital break-in came was simply "cuz we said so". After your head stops wobbling, read on to find out more about "PoopWaterGate".

If Hillary does not win the upcoming election, 12 million far left leaning internet trolls will slit their own throats. One of them may well be Amazon Czar Jeff Bezos, whose spanking new Washington newspaper has bashed Bernie Sanders in recent weeks, like a red-headed stepchild. Others may include Google's tandem of billionaires, Sergey Brin and Larry Page, since off-the-scale Silicon Valley liberals could never stomach a conservative president again. My assertions here become a bit clearer after you read a WP article by Ellen Nakashima entitled: "Russian government hackers penetrated DNC, stole opposition research on Trump". The piece is a bit like the ones proclaiming Putin "probably" did 1000 other misdeeds. The piece claims Russian "government" hackers broke into the DNC in a sort of electronic Watergate. But the only proof the writer gives is the word of the company retained, CrowdStrike, the cyber firm called in to handle the DNC breach. Now here is where "PoopWaterGate" gets interesting.

Nakashima tries to condemn Russia's government by painting a portrait of the "United States' top adversary", and other subjective coloring. Using a kind "poop-logic" (I guess), the reader is supposed to put 2 and 2 together, to come up with the smoking gun of election rigging in Vladimir Putin's hands. Here is one rationale Ms. Nakashima expects readers to grasp:

"The DNC said that no financial, donor or personal information appears to have been accessed or taken, suggesting that the breach was traditional espionage, not the work of criminal hackers."

"Oh brother", is all I can say there. Russian hackers took the time and effort to bust down the doors of the DNC, but wiped their feet and made sure to leave the digital silverware and expensive jewelry in place? What, "who and how much" is investing in ultra-liberalism is not important to Putin? Give me a break.

I suppose CrowdStrike co-founder Dmitri Alperovitch being a member of the Atlantic Council think tank does not even bear on the credibility of this news? As well all know, Washington think tank members could never be delusional, let alone tell a lie. The fact that CrowdStrike just received $100 million in Series C funding from Google, has no bearing either. Neither does the fact CrowdStrike also received millions from the investment bank Warburg Pincus, LLC, whose president is Tim Geithner, who was President Obama's Treasury Secretary, and president of the Federal Reserve Bank of New York!

Okay, so far we have Vladimir Putin being condemned some more by the likes of; Hillary Clinton, the DNC, Jeff Bezos (by proxy), Google (the same guys who helped the NSA), and the other money behind cyber spooks who tattle-tale on other cyber spooks. Maybe I am just too suspicious, but does a trail of breadcrumbs leading to the man who bailed out the Wall Street bankers mean Hillary will later be convicted of "PoopWaterGate"? One can only dream.

Finally, the Washington Post reportage goes on to name Alperovitch, and CrowdStrike's Watergate-like names for the two alleged hacker groups. One group was dubbed "Cozy Bear", while the other got tagged as "Fancy Bear", but Alperovitch does not say why. What he does go on to say, is that CrowdStrike "does not have any hard evidence" the hacks were Russian government!

You read that correctly.

In conclusion, while it is a certainty Russian hackers are some of the most skilled in the world, it is also certain Hillary Clinton's name is all over this report. The author takes particular care to cite her a couple of times, and the summary of the piece further paints a rosy DNC picture. Furthermore, while it was unnecessary for the author to repeat that no DNC donor financial information was accessed, she finished the article that way anyhow. I guess Mrs. Clinton, I mean Jeff Bezos, uh, I mean Ms. Nakashima wanted to reassure campaign contributors their money is safe with the Democrats. Or is the Democratic Convention going down in "PoopWaterGate"?