Why any Wife, Mother, Daughter, Sister or Feminist MUST Vote Trump 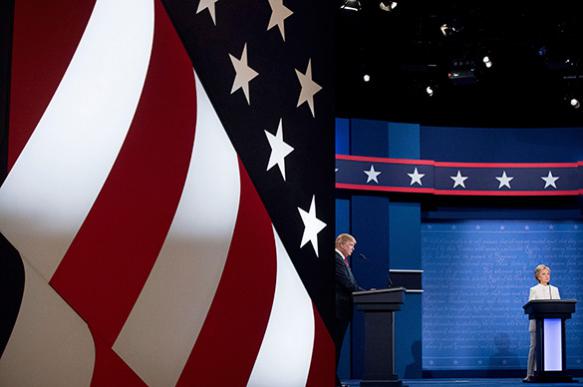 When I was younger my very dear godmother wanted a small television set for her morning-room. The color scheme of the walls and furniture was sky blue with crème accents. Naturally, she desired one to compliment the palate; unfortunately, this was 1960 and most television sets came in one color - black.

As the years progressed I cannot tell you the times I heard how she sought a blue television. Of course every year new models and brighter hues became available until eventually my godmother quite nearly discovered the precise set best suited to her. However, she passed away prior to ever purchasing one.

While the implication of my anecdote is obvious - you're likely to die before ever finding perfection - it seems some people in America need a gentle reminder what the dueling implications of their current search for a perfect political candidate holds for them; a fate not the least less serious than death.

The foremost Women's Issue of our time is IMMIGRATION and these are the two futures awaiting us.

If Clinton wins: Hillary has stated she favors a borderless world without limit and as a result the already porous Southern Border shall remain largely unguarded. To date, there are over 30 million Illegal Mexicans in the United States. They pay no income taxes and no payroll taxes of any kind yet they avail themselves of schools, roads, hospitals and welfare which are paid for by American Citizen tax dollars.

If Trump wins: He has emphatically repeated a physical wall will be constructed on the Southern Border, offering job opportunities to tens of thousands of American Citizens and billions of dollars for both the national and local economies. Other employment will be created by maintaining and guarding this structure. American tax dollars will support American children, American veterans and American elderly.

If Clinton wins: Illegal Mexicans present in the country with impunity, coupled with illegal driving privileges, illegal subsidies from taxpayers and dozens of other illegal "freebies" will not pause there. If Illegal Mexicans can break every other law in America why should sexual harassment, sexual deviancy and sexual assault be any different? Women should expect hundreds of thousands of additional sexual and physical assaults every year by people who have no legitimate excuse to be in the United States.

In Mexico it is legal to have sex with children 12 years of age! Although often misconstrued or hidden by fellow-travelers, this is the fact in most of Mexico today. Likewise, "bride kidnapping" is not uncommon, as long as the predator-perpetrator "trades" something for the female child. And don't think Illegal Mexicans leave this "culture" at their border. In recent years have been instances in the United States when Illegal Mexicans have swapped a case of beer or other items as compensation for taking someone's daughter...and then used this "justification" in courts for being acquitted of a crime!

If Trump wins: The 30 million Illegal Mexicans will dramatically be reduced. Their departure will lessen your daughter's classroom size while increasing resources for her school. You cannot have music, dramatics and sport programs when you double the class-size with non-contributing Illegal Mexicans. In very real terms, unless you are independently wealthy and can afford private instruction, the presence of Illegal Mexican children literally curtails your daughter's opportunities and minimizes her life choices.

If Clinton wins: One of the most important things to know, and to remember when you vote, is many allegedly "hard-working" Illegals and Refugees (who have genuinely empathetic stories from their experiences) are entirely unable to function in the United States.

With no disrespect, not a "slander" or a "slur," it is a fact the vast majority are illiterate in the languages of the new homelands AS WELL AS most being illiterate in their own languages! The myth these people "only want a better life" or they are "eager to work" is revealed by the truth they simply cannot work in an Industrialized Society which already has extremely high unemployment for manual labor.

Illegals and Refugees lack the training, lack the skills and most importantly lack the basic ability to learn them. In Germany it is now admitted only 1 in 50 of the Refugees are employable. Thus 49 of 50 will be on Welfare, receiving Free Housing, and collecting Taxpayer Benefits into which they never paid. At least one Syrian Refugee in Germany with 4 "wives" and 23 offspring claims $390,000 per year.

We all hope for the best for our children, but if your daughter is less than a doctor, lawyer, or other highly educated professional - Illegals and Refugees will directly compete with her in the workplace. And if she cannot find a job there may be no Welfare Benefits for her due to it all being taken by Illegals.

If Trump wins: In Germany the past 3 years are approximately 3 million Arab Refugees. Of the 3 million, even the government admits only 60,000 will find permanent employment. This means 2,940,000 uninvited people will be draining Social Security systems from hardworking taxpayers. With Trump a similar situation need never occur in the United States; where Citizens can care for fellow Citizens.

If Clinton wins: She has announced in addition to 10,000 totally unvetted Syrian Immigrants, Hillary will increase their number over 500% to nearly 80,000 combined (almost all men of fighting age, with few if any women or children). Though sympathetic, these people have no documents and even the F.B.I. admits it impossible to know who is a terrorist and who a refugee. As example, whether organized terrorists or not in the first six months of this year even the "approved" Refugees have committed over 142,000 serious crimes in Germany; many of these being assaults of grotesque sexual nature.

If Trump wins: There will be 0 new Syrian Immigrants to America since none can be ascertained non-threatening to the Citizenry. However financial and material aid will be sent to care for impoverished families in places near their homeland which are best suited by culture and religion to maintain them.

If Clinton wins: While there are no exact predictors, Europe is a good indicator. In many nations girls and women have been warned not to wear shorts or skirts so as not to "invite rape." Last New Year's Eve over 1,200 German women were assaulted by over 2,000 Middle Eastern Immigrants on one night alone. At a Swedish music festival this summer 5 girls were raped by Middle Eastern Immigrants in one afternoon. Many municipalities have reported "swimming pool" sex assaults on children as young as 6 years of age. These are not exceptions or indeed uncommon, but habitual.

If Trump wins: Although not all tragedies can be prevented, with care many can be avoided.  The best way is pro-active deterrence. If 80,000 Syrians are welcomed by Hillary (in only her first year of office, mind you) and only 5% are rapists that is 4,000 rapes which never need have happened. Worse, as "Multi-Cultural Jurisprudence" becomes pervasive in the courts (so to circumvent Immigrant riots like those seen in Paris recently) we will witness even the worst abusers set loose to commit more crimes.

Only last week in Austria, an Iraqi Immigrant who violently raped a 10-year-old in a swimming pool changing area was released by arguing his own "Sexual Emergency" and that the parents "could not prove the rape was unwanted by the child." This is a fate which awaits our daughters in America.

THESE ARE NOT PROVERBIAL ELECTION "HORROR STORIES" - THIS IS REALITY IN EUROPE TODAY!

Do I like everything Donald Trump has ever said? Far from being the case!

Do I agree with much of what Donald Trump proposes? Absolutely not!Do I trust Donald Trump will fulfill every election promise? Hardly!

However since he has premised his campaign on the basis of Defending Against Harmful Immigration it is likely this singular position would be the last pledge he would or even could abandon once in office.

Is Donald Trump the ONLY CHOICE FOR WOMEN AND FEMINISTS? - WITHOUT ONE SINGLE DOUBT!

For those unsettled by recent complaints against him, we cannot judge whether those who have accused Trump of inappropriate acts are telling the truth or not. There are a multitude of legitimate reasons why women wait to come forward with their stories of victimization. That being said, there are also a multitude of reasons why some women come forward only weeks before a national election.

To the contrary, as of this moment there are women of all ages - from girls of 5 to grandmothers of 85 - living in Europe who are verifiable victims of forcible sexual assaults and rapes on a massive scale. These are not "He said, She said" or ambiguous private situations; this is an Epidemic Against Women.

And it is ENTIRELY self-caused. It happened because Europeans ALLOWED it to happen. Americans CANNOT do the same!

There is only ONE ISSUE in this Presidential campaign for Women - Mass Immigration From The Third World, especially of violent men from a hostile Middle East. This can be said with complete certainty because if you are raped and murdered, a real possibility under Hillary Clinton and her European Model of Misogynist Importation, you will not be ALIVE to vote in another election.

For all women interested in women, protecting daughters, caring for elders, and with a call to each Authentic Feminist who actually works toward Women's Issues (rather than being Faux Feminists preening for cameras) there is but one candidate who can and must be supported by all.

Donald Trump may provide us many excuses to doubt him, from boorish behavior to partial-birth abortion. Donald Trump may give us a million reasons to loathe him, with his dirty mouth and surly disposition. And it is true Donald Trump may be another man in the Oval Office, causing us to wait just a bit longer for a female to occupy it.

Yet Donald Trump is the only candidate acceptable for Women because he alone provides a clear and unambiguous stance on the ONE WOMEN'S ISSUE which counts most- keeping women safe and alive.

One candidate makes you feel good about yourself, but puts all women alarmingly at risk. One candidate makes you sick to your stomach, but has female-centric policies which actually protect them. There can be no hesitation that, for our families as well as ourselves, the one who deserves our vote is Donald Trump.

Time is short - share this with friends, tell every woman you know...and get yourself to the voting booth.