People of color: NFL doesn't give a damn about you 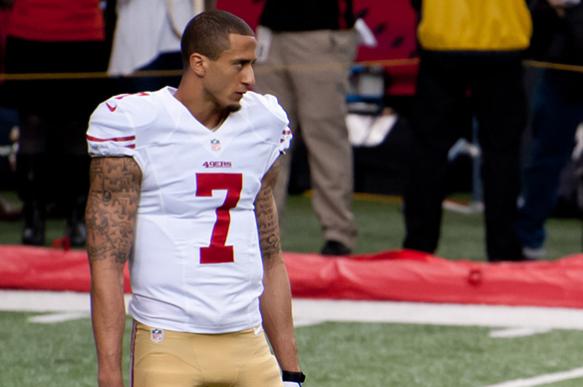 In the beginning there was guarded optimism.  As the opening of the NFL season approached, more and more people began questioning why, despite a dearth of effective quarterbacks, not a single team had hired Colin Kaepernick, the player who began the "national anthem" protests in 2016.

A group of African-American ministers made a video calling for people to "Black Out" the NFL until Kaepernick was signed; an online petition supporting a boycott of the NFL garnered almost 200,000 signatures; and there was a rally held outside of NFL headquarters in New York City, where the message espoused by Rev. Jamal Bryant is that the NFL has no problem with players getting a concussion, but blacklist (or, perhaps more appropriately "whitelist") them when they get a conscience.

But, in reality, there was no such conflict.  NFL team owners really had the choice of being on the right side of history, demonstrating concern for racial injustice in the United States, standing up to the white supremacist occupying the White House, and giving their teams the best chance of winning, OR proving that they are intent on perpetuating the institutional racism dividing the nation, silencing those who question the status-quo, continuing to genuflect before the racist they gave millions to, and/or dredging up and signing inferior players (and some with criminal records).

Guess which one they chose!

To these owners the real question was, Who do we want to anger the least?  Is it the fans who happen to be people of color, who, on a daily basis, face the injustices that fueled Kaepernick's protest, and who loath the fact that the "nickname" of one team is a racist opprobrium against Native-Americans, or is it those "conservative" white folks who "love America" and hate "uppity Negroes" for not knowing their place, who worship at the cult of Trump, who live vicariously through NFL games and/or use them as a weekly excuse to get intoxicated, who complain about "political correctness", and who only express concern about "black on black" crime when it derails discussions about police brutality?

But it isn't just the NFL that is demonstrating contempt for people of color:  It is also the sponsors that advertise during the games; it is the networks that refuse to show the anthem protests; it is the commentators who profess that politics and sports should not mix (unless, of course, someone is trumpeting a political stance they agree with); it is the hypocrites, like the late John Matuszak said in the movie North Dallas Forty, who call professional football a "sport" when it suits their interests, and a "business" when it doesn't.

Perhaps what everyone underestimated in the ongoing Kaepernick saga is the depth and vileness of the racism that infects a plethora of NFL owners, administrators, and coaches.
Now Kaepernick has filed a grievance against the NFL, and many commentators are writing his football obituary.  History has shown that those who pioneer movements tend to be those who suffer most, and, in far too many cases, don't even get to live to see the changes forged by their courage.  Oftentimes, there are others who follow to keep a movement alive.  Some are driven by a sincere desire for change, while others act like lampreys, self-servingly exploiting what they lacked the courage to create themselves.

As time goes by, Kaepernick's protest might be honored with statues and testimonials, just as Tommie Smith, John Carlos, and Muhammad Ali are honored.  But belated white guilt is a poor substitute for current white blindness.

I have been boycotting the NFL for over two years, and I hope that, given its treatment of Kaepernick, that people of color will do the same.  But a word of caution-it's likely to make no difference.  If the NFL and its sponsors truly cared about your viewership and money, they wouldn't emulate NASCAR by wearing their racism, under the guise of "patriotism," on their sleeves to appease the fans they truly care about.

Football coach Henry "Red" Sanders was quoted as saying, "Winning isn't everything.  It's the only thing."

But in today's NFL, the message is "Winning isn't everything.  Losing is perfectly acceptable if it keeps people of color in their place."