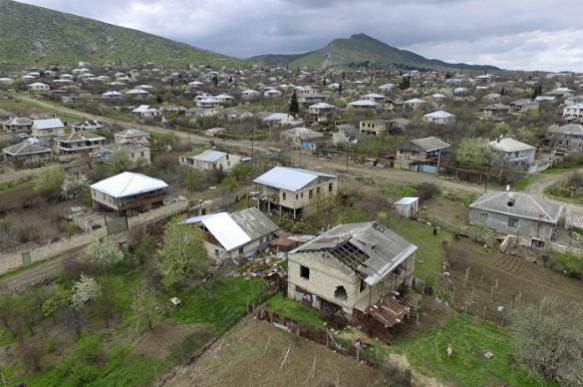 The disputed Nagorno-Karabakh region between Armenia and Azerbaijan also lends its name to an interminable problem between the two countries which date back to the beginning of the 20th century.

The Nagorno-Karabakh dispute that resurfaced as the cold war faded, has been escalating since the disintegration of the USSR. In 1992, shortly after Azerbaijan and Armenia gained their independence, this problem drove the two countries into a conflict. Twenty thousand people lost their lives in a war that lasted until the tentative ceasefire agreement was made in 1994. During that period 1.5 million people had to abandon their homes. Since the issue has not yet been resolved by a peace treaty and only the mentioned ceasefire has been in force until now, the two countries are still technically and officially at war.

There have been numerous talks between Armenia and Azerbaijan for the resolution of the Nagorno-Karabakh problem, but no tangible results have been obtained until today. In 1992, the Minsk Group of the Organization for Security and Co-operation in Europe (OSCE) was established to solve this problem. The group was co-chaired by the United States, Russia and France in 1994. However, the Minsk Group has not made any constructive progress thus far.

Despite the negative course of events, Armenian Foreign Minister Edward Nalbandian made a groundbreaking statement in the Armenia-Diaspora, Sixth Pan-Armenian Forum held in Yerevan in September. Nalbandian said that in order to hasten the ongoing negotiations within the scope of the OSCE (the Organization for Security and Co-operation in Europe) that aims to settle the Karabakh dispute, the Armenian side, may return certain Azerbaijani territories that do not pose a threat to the security of Karabakh. He stated that negotiations with Azerbaijan on this issue continue and that he cannot share any further details about this step that will be taken to reduce the tensions between the two related countries.

The general consensus of opinion is that Russia was a significant influence behind this surprising and positive decision. It is stated that Russia is leaning towards the establishment of a safe and stable region on her southern borders against the centers of crisis and dissent in the Middle East such as Syria and Iraq. With the stabilization of the region, it is considered that Russia would be able to develop and improve relations with its allies such as Iran, in a healthier fashion, as well.

Last month, the positive and constructive atmosphere of the talks between Azerbaijani President Ilham Aliyev and Armenian President Serzh Sargsyan in Geneva supported the establishment of an environment of peace, reconciliation and stability in the region. The declaration made by the OSCE Minsk Group states that the meeting was held in a constructive atmosphere and that additional measures will be taken to reduce tension in the region and that the parties will continue to work to resolve the issue peacefully.

The most recent meeting of Aliyev and Sargsyan in June 2016 took place in St. Petersburg under the auspices of the Russian President Vladimir Putin.

A few years ago political scientist Yulia Yakusheva, Executive Director of the North-South Political Studies Center at Moscow State University, has also drawn attention to the peaceful policies of Russia in the region. Yakusheva stated that Russia's attempts to actively contribute to the improvement of relations between Armenia and Turkey complies with the general policy of Russia to ensure security in the South Caucasus region. Yakusheva said that the Nagorno-Karabakh problem also falls under the same policy. She also said that Russia's efforts to actively mediate the Armenian-Azerbaijani conflict in the Nagorno-Karabakh problem is a sign of this general policy. She emphasized that as a country that has good relations with Azerbaijan, Armenia and Turkey, Russia can really help stabilize this region and is already supporting this initiative.

A similarly good development was the meeting of the Catholicos of All Armenians, Karekin II and the Religious Leader of the Caucasus Muslims, Sheikh ul-Islam Allahshukur Pashazadeh in Moscow on September 8th, upon the invitation of Patriarch Kirill, the Patriarch of Moscow and all Rus. Following the tripartite meeting, in their joint statement the religious leaders emphasized that they support the peaceful settlement of the Karabakh dispute and voiced their good wishes for the conflicts to be overcome through the two religions' principles of good neighborliness, kindness, love for friendship, and mutual forgiveness and compassion. Shaykh al-Islam Allahshukur Pashazadeh said, "The Armenian and Azeri peoples will always live side-by-side, therefore there is no alternative to peace and cooperation. We appeal to our people to bring up and educate the youth in the spirit of goodwill and mutual respect, peace and morality."

The progressing and improving course of Russian-Turkish relations is a crucial factor for the materialization of the peaceful and unifying policies of Russia in the region. As a residual custom and manner of the 20th Century, the countries of the region are used to see one another as a security threat. The current policies can be considered as the harbinger for the end of that habit.

Indeed, the countries of the region could have become an unstoppable global power by establishing an alliance of friendship and brotherhood, but they have been deprived of this opportunity all because of the balance, security and safety-first policies they have maintained against each other for years. Preoccupied by their habit of seeing each other as a constant potential threat, they have not been able to focus on the global imperialist enemy, which has been the real threat for over a century. That is why they couldn't attain the strong solidarity needed to spoil these games.

As a matter of fact, the threat and destruction perpetuated for years by this imperialist power that implements countless plans, projects and calculations of interest in the region from Afghanistan to Iraq, Syria to Libya and Yemen, are out in the open. Every day this imperialist power adds a new layer to its insidious games by provoking, creating crisis, conflicts, tensions, isolating and playing one against the other behind the scenes, in order to weaken countries like Turkey, Iran, and Russia that it couldn't directly drag into chaos. That is why it becomes more and more imperative for the countries of the region to urgently cease the meaningless disagreements, differences and artificial tension between them and unite as a great regional power against these dark forces.

Likewise, it is also imperative for Russia, Turkey, Iran, Azerbaijan and Armenia to solve the Nagorno-Karabakh problem together. Beyond solving problems, these five countries can strike the greatest blow against the deep forces that have been constantly causing problems for the world by forming a defense pack through a strong alliance and by opening their borders and allowing visa-free travel for the citizens of this alliance.

The first important step to be taken in this direction is to have the next Azerbaijan-Armenia meeting in Moscow, Istanbul or in Tehran instead of Geneva. Russia, Turkey and Iran should be the ones acting as the guarantor during these negotiations.