Vadim Gorshenin: Why Russia does not celebrate the Centenary of the October Revolution

The Russian administration has decided not to celebrate the centenary of the Great October Revolution. The reason for that is easy to understand. It was not based on any principles. Rather, Russia has lost the specialists, who could do it with dignity. Instead of November 7, we now officially celebrate November 4th as the Day of People's Unity. The majority, if not all Russians, take this holiday as an additional day off work, which means nothing else. 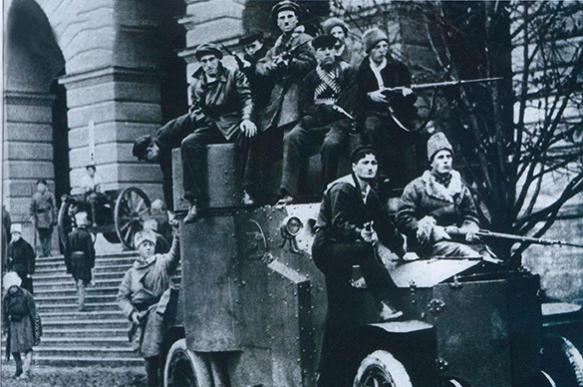 A little earlier, this powerlessness manifested itself in the organisation of the World Festival of Students and Youth, where, as they say, hundreds of participants were not provided with enough water and food during the very first days of the festival. Not to bury the event, they arranged a few meetings with Putin there.

Before that, there was the celebration of the Day of Moscow, which they combined with municipal elections. It is worthy of note that the Russian authorities intend to have a similar approach for the organisation of the forthcoming presidential election, when the day of the election will coincide with celebrations of the Crimea. One shall assume that many will opt to spend the day eating, drinking and practicing all the traditional Russian fun instead of going to the polls.

If they could, they would have definitely celebrated the event properly, I'm sure. Throwing such a landmark date into oblivion is barbaric. In France - the nation that lives under completely rules and laws for years and years - still has the Day of the Bastille as its most important public holiday, as it seems.

Let us ask ourselves the following questions:

Could any of the country's acting top officials become them if it was not for the October Revolution?

2. If Kerensky (who escaped from either the Winter Palace, or from the Gatchina Palace wearing a nurse's dress) had stayed in power, would Russia have remained per se?

3. Would Valentina Matviyenko, the sitting chairwoman of the Council of the Federation, be able to take this position taking into consideration the fact that she had built her entire career working at communist unions of children and youth?

At the same time, there may be other reasons behind the decision not to celebrate the birth of the country on the ruins of another one country, which the God-anointed tsar had destroyed by his actions before his abdication.

The Constitution of the Russian Federation contains many theses that Bolsheviks used to declare. Many of them, unfortunately, still remain mere declarations. They fall apart, and there is nothing to celebrate indeed against such a background indeed.

Nevertheless, we congratulate everyone on the Centenary of the Great October Revolution!