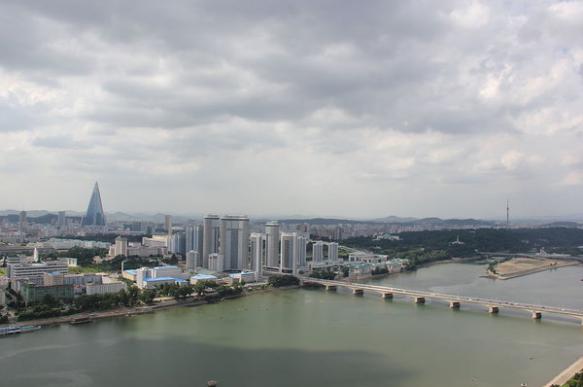 Perhaps few double standards in international relations could be so sharply exposed as the US-Canada hosted Conference in Vancouver on 16 January, focused on the traded threats between the United States and North Korea.

The US possesses an estimated 9,600 nuclear missiles, enough to eliminate life on earth multiple times - were it not vapourised in a mere "few" nuclear strikes.

Donald Trump has threatened North Korea with "fire and fury", suggesting that it may be necessary to "totally destroy" the small nation. It has been widely reported that the US has a "decapitation programme" to eliminate the North Korean Leader and government - and presumably with it the capitol city and more. Further, Trump apparently thinks the possible eradication of a nation and possibly near geographical neighbours can be encapsulated in his infantile taunt:

There are huge uncertainties as to the ability of North Korea to deliver a nuclear payload to the US or even a US-appropriated island such as Guam. However there is no uncertainty that since the Trump Presidency the chilling threats of annihilation from Washington have spurred North Korea to accelerate what they regard as a defensive weapons system.

The Vancouver Conference could have been a perfect place, in a beautiful city to invite a delegation from North Korea for dialogue, communication and walking in the shoes of others. "Hermit nation" sneers the West. No, ostracized, cut out, diplomatically dismissed and threatened with annihilation.

But North Korea, it's largest trading partner, China and Russia who know more than a bit were not invited. As ever the victim is excluded. No lessons learned or seemingly even cared about, from the horrors inflicted on Afghanistan, Iraq, Libya, Syria and indeed the former Yugoslavia previously, to name just a few other slaughter-fests led by the un-appointed "Leader of the Free World."

The way to stop N Korea "threatening" is to stop near sixty years of genocidal threatening by the US and include the country in all discussions, instead of accusing it of being "isolated" because the West is isolating it.

Vancouver is another devastatingly missed opportunity where those threatening the entire planet have posh, multi course dinners and fine wines pat them selves on the back, whilst others live daily with the searing terror a thankfully false nuclear alarm in the US State of Hawaii suffered two days ago.

Let us hope that this assessment is wrong and that there are those who can embrace the chance to turn things around and persuade the war hawks that theirs is the path to insanity and even the - literally - world's end.

"The bitterest tears shed over graves are for words left unsaid and deeds left undone."