Just Words on Scraps of Paper

Any educated person with a smattering of legal understanding can see that the Washington regime and its clients at London and Paris are guilty of war crimes. Just look at the latest piece of evidence: by launching a missile attack against Syria (13 April), a full-fledged UN member state with a legitimate and recognized government, US president Donald Trump and his partners in crime, Theresa May and Emmanuel Macron have violated the sixth Nuremberg Principle. These principles were formulated at the end of World War II in order to provide a legal basis for the prosecution of Nazi politicians and soldiers. 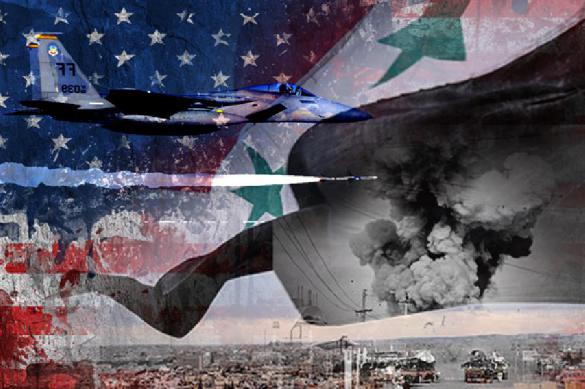 The least one can expect of the very nations that established these principles, is that their rulers adhere to these rules. Of course, since 1945, they have generally been doing quite the opposite, but today's circumstances are not those of previous decades, if only because many people all over the world are realizing they are being misled and lied to systematically. Trump and his faithful followers in London and Paris have also violated articles 1 and 2 of the UN Charter, which in 1944 was also drawn up by the US and its allies. Moreover, the US has violated its own laws, namely the War Crimes Act of 1996, but that should not be a matter of concern to the rest of the world.

The Sixth Nuremberg Principle refers to three categories of crimes, all punishable under international law. The first category being Crimes against Peace, namely the "planning, preparation, initiation or waging of a war of aggression or a war in violation of international treaties, agreements or assurances" as well as the "participation in a common plan or conspiracy for the accomplishment of any of the acts mentioned under (i)", both of which clearly seem to be the case in Syria.

The second category is "War Crimes:" Trump and his two European cronies have so far violated the last paragraph of these, namely "wanton destruction of cities, towns, or villages, or devastation not justified by military necessity." So far at least as far as Syria is concerned, Trump, May and Macron have not yet committed any Crimes against Humanity (the third category), although Trump still presides over the systematic imprisonment, torture and inhumane treatment of Muslim prisoners at the Guantánamo Bay Concentration Camp.

The UN Charter has also been violated, namely article 1: "To maintain international peace and security, and to that end: to take effective collective measures for the prevention and removal of threats to the peace, and for the suppression of acts of aggression or other breaches of the peace, and to bring about by peaceful means, and in conformity with the principles of justice and international law, adjustment or settlement of international disputes or situations which might lead to a breach of the peace; as well as two paragraphs of article 2, to wit number 3: "all Members shall settle their international disputes by peaceful means in such a manner that international peace and security, and justice, are not endangered" and number 4: "all Members shall refrain in their international relations from the threat or use of force against the territorial integrity or political independence of any state, or in any other manner inconsistent with the Purposes of the United Nations."

Like his predecessors Bush I and Bush II, Clinton and Obama, Trump ought to be prosecuted for war crimes and crimes against peace. The same goes for Tony Blair, David Cameron, Theresa May, Nicolas Sarkozy and Emmanuel Macron, not to mention the hundreds, if not thousands, of other politicians and soldiers that unflinchingly executed superior orders. Millions have died as a result of their criminal acts, while damages amount to trillions of dollars. Enough reasons, one would say, to indict each and every one of these individuals.

So far, the only persons brought to justice for war crimes are those that have dared challenge the Washington regime's orders. Indeed, the world of international politics seems quite like the reality of big city life: the small fry get caught, while the big fish, the mafia bosses, get away with murder. Perhaps it is a sobering thought that things have not been very different through the ages, and perhaps indeed nothing ever really changes.

Yet this reflection also flies in the face of common sense, decency and self-esteem. If, as we in the "West" are incessantly being reminded, we are living in a democracy, then why does the "media" remain silent on these issues? The obvious answer is that "Western" media are corrupt to the core and owned by corporate interests or the state itself. Most journalists are no more than paid propagandists for big business, immoral "think tanks" and corrupt NGO's, or else mere government agents.

Now that less and less people in the "West" allow themselves to be brainwashed by the state and corporate media, it would seem about time for a turnaround. Not, of course, the kind of turnaround by imposing state censorship, as is currently being attempted by the US, the EU and many of its member states, but a genuine turnaround, by allowing all those ambitious journalists out there to do their job: report the news. And report it accurately and faithfully.

A case in point is the recent report in NRC-Handelsblad, the self-proclaimed Dutch Newspaper of Reference, on the testimony of "gas victims" before the OPCW, in connection with the fake news on the Douma gas attack of 7 April, 2018. Written by Eva Cukier, the paper's editor on Russia and Eastern Europe, the report is really no more than an ordinary hit piece, suggesting the witnesses were instructed by Russia to tell a particular story in line with Russian government assertions that the Douma incident was a 100% fake. Not surprisingly, miss Cukier has also figured on the payroll of the International Partnership for Human Rights, funded by George Soros' Open Society outfit, and one that is also financed by the National Endowment for Democracy, a CIA-front, and by the European Commission.

What goes for journalists in the "West," also applies to its academics and scholars. So far, no "Western" academic has publicly spoken out against the recent war crimes committed in Syria by the US, France and Britain. Even if one would actually have come forward, it is doubtful he would have found an outlet willing to carry his observations. Perhaps-and I suspect this might be the case-there no longer are any true intellectuals in the "West." After all, an intellectual, by definition, is prone to holding dissident ideas and not afraid to voice them.

Refusing to believe the intellectual climate in the "West" had sunk to such low depths, I decided to approach Ernst Hirsch Ballin, a former Cabinet Minister (of Justice), law professor at Amsterdam University and president of the Asser Institute, a world-renowned think tank specializing in international law. Based at The Hague, the self-proclaimed "International city of Peace and Justice," (it is home to the International Court of Justice, the Permanent Court of Arbitration, the International Criminal Court, the International Criminal Tribunal for the former Yugoslavia, and the Organization for the Prohibition of Chemical Weapons), it would seem the boss of such a fine institution should be able to give a proper answer concerning war crimes committed in Syria by the US and its clients. Nevertheless, dr. Hirsch Ballin never answered my clear and simple question: "Since the governments of the US, the UK and France have decided not to await the outcome of an official OPCW mission into the matter of the recent alleged chemical attack in Syria, nor sought permission from the UNSC, does their recent missile attack on Syria constitute a breach of international law in your view?"

Hence the conclusion is inevitable that dr. Hirsch Ballin and the Asser Institute implicitly share a point of view that was also held by the Nazi leadership during the 1930s and early 1940s. Moreover, the Asser Institute obviously condones war crimes and by doing so not only makes a mockery of its scholarly activities, but also makes the institute an accomplices to that foremost crime in international law: starting a war. As a matter of fact, it is outrageous that someone calling himself a legal scholar and a specialist on human rights and international law, should not do his utmost to uphold international law and bring to justice those who commit war crimes.

Obviously, dr. Hirsch Ballin ought to have known better. He was Minister of Justice in the Balkenende cabinet that was forced to step down in 2010 after an official report (the Davids Report) concluded that the Dutch support for the conquest of Iraq in 2003 by the US and Britain was a violation of international law.

He is living proof that often the experts, the technicians, the scholars, academics, in short the whole army of enablers and executors of criminal superior orders make themselves accessory to war crimes. At the Nuremberg trials it was expressly stated that citing superior orders was not admissible as a justification for committing war crimes. Yet today, apparently no one realizes this and acts accordingly. It is as if the Nuremberg trials of Nazi war criminals have never taken place.

The conclusion that forces itself upon us is quite sobering, if not shattering: the horrors of World War II, the mass killings, the massive human rights violations, the war crimes, have taught us nothing at all. While ritually invoking Hitler as the epitome of human evil, "Western" leaders are acting in ways not different from the Nazis, and have been doing so for decades. With total and absolute impunity, while unleashing Kangaroo justice on their defeated enemies.

Treaties and solemn pledges are worth no more than the cheap paper they are written on. Words have been robbed of their meaning, language itself is being demolished, and humanity's sufferings will not come to an end because of it.

The future does not look promising.