The Amazon and the New Conquistadores

The Amazon and the New Conquistadores 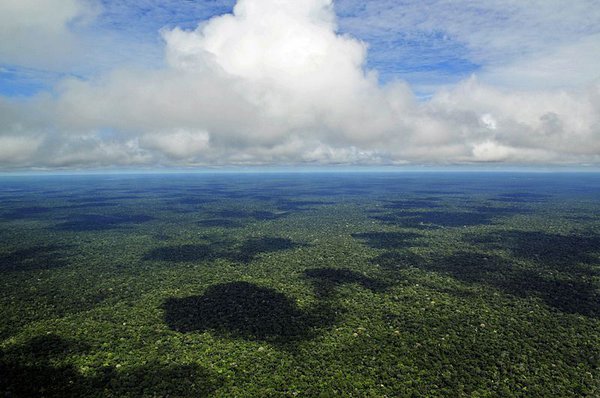 When the Spanish conquistador Francisco de Orellana in 1541, explored a majestic river, surrounded by a green oasis of unprecedented beauty in a pristine paradise and accompanied by mysterious animal sounds, he ran into a local tribe. A subsequent battle was fought at the mouth of the Madeira. In the record of the monk Gaspar de Carvajal, he wrote that their attackers consisted of female warriors. These were promptly called Amazons, after the female warriors of Greek mythology. This is how the Amazon forest and the river got their name.

Now, a new conquistador has appeared in the Amazon. One that hates homosexuals, Indians, black and colored Brazilians, and women. He is a danger to the entire planet, because his government heralds the end of the Amazon rainforest. He calls himself 'the Trump of the Tropics', but he might just be much worse than Trump. Jair Bolsonaro, the new president of Brazil, desires a return of the military dictatorship. Everyone who disagrees, must pay for it. Bolsonaro owes his success largely to corruption, and the enormous anger of the people over the greedy political class.

This is the climate created by Capitalism and Neoliberalism, a climate of corrupt and failing politicians.

The need for a 'strong leader'

Everybody in the world wants a 'strong' leader these days, a leader who thinks for us, and determines what is good and bad. This often results in oppression, poverty and manipulated media. These leaders come to power through elections, but do not believe in the civil liberties of democracy. Criticists are intimidated, journalists, opponents, the civil service and the judiciary are 'cleansed' of opposition. History is full of strong men such as Stalin, Napoleon, Hitler, Mao Zedong, Pol Pot, just to name a few.

In South America we had Pinochet. He was a Chilean general and politician, and a ruthless dictator since his coup d'état. With the help of the United States and the CIA, a coup d'état was perpetrated on 11 September 1973, killing President Salvador Allende.

Or what to think of lieutenant general Jorge Rafael Videla, who was President of Argentina from 1976 to 1981. He became the head of the military junta, which violently put an end to the government of Isabel Perón.

It seems that these political figures are once again on the rise. In the West they are being curbed by the rule of law, but democracy is under pressure. 'Strong' men seize power all over the world.

After the bankruptcy and the defeats of democratic left in South America, violence again reigns in rural areas. In Peru and Chile, Paraguay, Ecuador and Honduras, farm workers, Indians and environmentalists are killed. In Colombia, the end of the war with the guerrilla movement FARC does not mean the end of the violence in the countryside.

The Amazon region was doing alright for a while, but with President Michel Temer, the landowners and the cattle lobby have been reemerging, gaining more power and freedom. Since the advent of the Temer administration, several slaughters have taken place in Brazil. More than ever, protected Indian areas are invaded and small landowners are driven out. A new bill places all Indian reservations once again under government rules. Is this the 'banality of evil' in a former slave nation? A country in which the ancient colonial relationships have never really changed?

With the election of Bolsonaro, the Amazon region is up for grabs. Everyone and everything can be overruled or ruined: the Amazon, environmentalists and indigenous people. All for the sake of economy, for money and for the few who have the power. Citizens must side with the alpha male, or be torn apart.

The meat production and the criminal behavior of illegal logging, together with the appropriation of protected environmental areas, goes hand in hand with the destruction of the Amazon, modern slavery and brutal killings. All this with the support of President, Parliament and Church, and with the unlimited power of South American landowners.

According to a report from Oxfam International, one percent of the large landowners in Latin America now owns more land than all the rural residents, small farmers and agricultural workers combined. And everywhere on the continent, this process is increasing. This disrupts entire societies, says Oxfam. But in the current atmosphere of unbridled greed and corruption in high places, voices for sensible policy are often drowned out.

The Amazon region is incredibly large and of vital importance. It is almost as big as Australia. It is spread over nine countries: Brazil, Colombia, Venezuela, Bolivia, Guyana, Suriname, Ecuador, Peru and French Guiana. About twenty percent of the earth's oxygen is produced by the trees of the Amazon forest. Of the 350 ethnic peoples, an estimated 60 are still completely isolated. In the past fifty years, about twenty percent of the Amazon forest has been cut down. The trees hold a gigantic amount of carbon. It would have disastrous consequences if all that carbon was released. A lot of our food originates in the Amazon forest: coffee, chocolate, potatoes, bananas, pineapple, corn, black pepper, tomatoes, and so on. Moreover, many raw materials from our medicines originate from the Amazon rainforest.

In which madness have we ended up? When China again allow the trade in tiger parts and the horn of the rhino. That will signal the end for these already endangered species. The demand will increase enormously. The Chinese and other peoples in Asia believe that the horn of the rhinoceros contains a medicine against various diseases, including cancer. But in fact, the horn consists for a large part of keratin, which is what human fingernails are made of. Some parts of the tiger are assumed to be beneficial for the potency of men. Officially, the trade is only allowed for 'research, health care and cultural applications', but of course that is not what is happening in reality.

After global outrage, Donald Trump has retracted his earlier intentions to allow the import of game trophies from Zambia and Zimbabwe, at least for the time being. The population of elephants, an endangered species, would decrease further if the Trump law had passed. Not surprisingly, hunting lobby's and the National Rifle Association were positive about the decision. Whether the reconsideration of Trump is only about elephants or about all animals is not known, because last year licenses were issued for importing killed lions.

Another report, from the World Wildlife Fund shows that, since 1970, wildlife populations have decreased by 60 percent worldwide. Yes, you read that correctly: 60%. And if nature continues to disappear at this rate, it can have major consequences for people. The destruction of habitats, through agriculture, fishing and poaching, is the main reason for the strong decrease in the populations of wild animals. Moreover, the growth of the world population is getting to be a huge problem, as the population has grown from 3 billion to over 7 billion since 1960. The breakdown and destruction goes at an incredible rate, leaving us very little time to turn things around.

Its one minute before twelfe.

How big is your ecological Footprint

We can still reverse the trend. This requires sustainable choices in regard to food, energy and raw materials. Everyone can contribute to this in his own way. Changing the enormous decline of biodiversity worldwide requires global sustainable choices. By "we" I mean: you and me, everyone. We have to consume less, recycle more, deal consciously with packaging, as little plastic as possible. Think of our planet, of our children and grandchildren. They also have rights, just like the Amazon and their native people do.