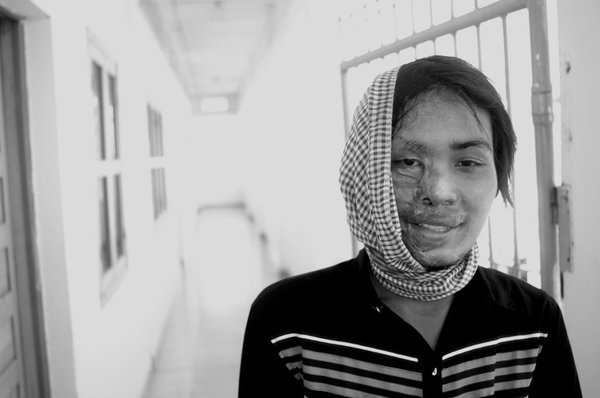 This is a test for humankind, for both men and women, a trial to see how developed, or how barbaric and sickening, we are as a species.

2018. The statistics stand as they were twenty years ago. One third of women are victims of some form of abuse in their lifetimes, everywhere, in all regions, in all social and economic strata, in all groups whatever the age, race, color or creed. It is an absolutely disgusting, sickening and shameful comment on the revolting species called Homo sapiens, an unwanted, ignorant parasite blemishing this planet, destroying it from the bottom of its seas until way up into space, behaving with less decency than any of the animals we cohabit this place with.

Year after year the same statistics come churning out of the nauseating reports on gender violence, documenting hideous crimes against the person, creating a demonic charter of a total lack of respect, denoting a selfish, arrogant, egotistical psyche common to so many billions of "men" who think it is their right to beat, rape, molest or harass women and girls to prove their masculinity.

FIST: Fear, Impunity, Silence, Terror, the acronym says it all. Fear of ridicule, fear of reprisals, fear of being beaten when the drunken slob comes home and inflicts his ugly presence on the family, impunity because he will do it time and time and time and time and time again and he knows that nothing will happen to him, until that one day when he goes too far and murders his wife, or daughter; silence, his greatest ally and the one thing which will guarantee that he will repeat the cycle of behavior, right after the first "episode": be sure, he will do it again. And terror, a life ruined, hopes destroyed, a feeling of worthlessness because it's common practice to slap the wife or girlfriend around.

Legal systems are blind, ignorant or connivant, meaning that domestic violence is treated differently from other forms of violence towards third parties. A slap on the face is treated as a domestic incident to be swept under the carpet whereas is should be tried in court as a case of actual bodily harm, at the very least, incurring a custodial sentence of a minimum of five years without frills and with hard labor... and we all know what happens in prison to those who beat up women.

But it won't happen, will it? And next year's figures will be the same as this year's, and last year's, and from the year before. Unless people do something about it. You can start by reading the message from the UN Under-Secretary-General and Executive Director of UN Women, then visit the UN Women website and find out what initiatives you can become involved in.

Message from Phumzile Mlambo-Ngcuka, UN Under-Secretary-General and Executive Director of UN Women on the International Day for the Elimination of Violence against Women, 25 November 2018

In the recent past, grassroots activists and survivors, as well as global movements such as "#MeToo", "#TimesUp", "#BalanceTonPorc", "#NiUnaMenos", "HollaBack!" and "#TotalShutdown" have converted isolation into global sisterhood. They are making offenders accountable, exposing the prevalence of violence from high office to factory floor. Today's global movements are setting collective demands for accountability and action and calling for the end of impunity, to ensure the human rights of all women and girls.

This year's United Nations theme for the International Day for the Elimination of Violence against Women is "Orange the World: #HearMeToo". It aims to honour and further amplify voices, whether a housewife at home, a schoolgirl abused by her teacher, an office secretary, a sportswoman, or a boy who is an intern in a business, bringing them together across locations and sectors in a global movement of solidarity. It is a call to listen to and believe survivors, to end the culture of silencing and to put the survivors at the centre of the response. The focus must change from questioning the credibility of the victim, to pursuing the accountability of the perpetrator.

Those who have spoken out have helped us understand better just how much sexual harassment has been normalized and even justified as an inevitable part of a woman's life.  Its ubiquity, including within the United Nations system, has helped it seem a minor, everyday inconvenience that can be ignored or tolerated, with only the really horrific events being worthy of the difficulty of reporting. This is a vicious cycle that has to stop.

#HearMeToo is therefore also a strong call to law enforcement. It is deeply wrong that the vast majority of perpetrators of violence against women and girls face no consequences. Only a minority of cases are ever reported to the police; an even smaller percentage result in charges, and in only a fraction of those cases is there a conviction. Police and judicial institutions must take reports seriously, and prioritize the safety and wellbeing of survivors, for example by making more female officers available for women reporting violence.

Laws must recognize that sexual harassment is a form of discrimination against women and a human rights violation, both expressing and re-generating inequality, that occurs in many arenas of life, from schools to workplaces, in public spaces and online. If laws protect both formal and informal workplaces, the most vulnerable workers, like those dependent on tips from customers for their income, will have a better chance to speak out against abuse, and be heard.  Employers themselves in every country can make vital impacts by independently enforcing standards of behaviour that reinforce gender equality and zero tolerance for any form of abuse.

UN Women is at the forefront of efforts to end all forms of violence against women and girls through the work we do, from our UN Trust Fund to End Violence against Women that benefited over 6 million individuals last year, to the 500-million-Euro EU-UN Spotlight initiative, which is the largest ever single investment in the elimination of violence against women and girls worldwide, to our work on safe cities and safe public spaces. In addition, we are working within UN Women and the UN system as a whole to address sexual harassment and the abuse of power within our own workplaces.

This year, together with you, we aim to support all those whose voices are still not yet being heard.

UN Women is the UN organization dedicated to gender equality and the empowerment of women. A global champion for women and girls, UN Women was established to accelerate progress on meeting their needs worldwide. For more information, visit www.unwomen.org.