The horror of the Islamic gangs in the UK

Pervert and inhumane. These are just two of the adjectives used by the judge in Leeds to describe 20 men, all of Pakistani origin, sentenced to Huddersfield. What apparently seems a quiet town in the heart of Britain hid, and according to several sources still hides, a traffic of disturbing child sexual exploitation. In other words, even girls aged only 11 have been turned into sex slaves. Such as? The gang lured prey on the street, leaving school or the bus station. Apparently, it could be a simple invitation to a party. But here, then, there were alcohol. Moreover, the drugs were inside the drinks. What happened next can be imagined. "At one point I was alone with one of them. That was the first time they raped me. And before that night I did not even know what sex was like" K. says, who has to remain anonymous for legal reasons. Then she adds a disturbing detail: "Often they told us that we were nothing but white trash". 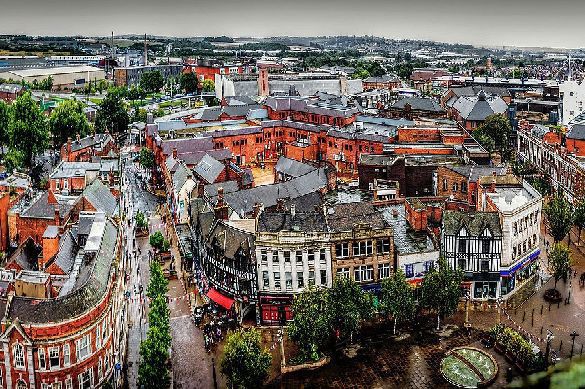 Once you enter the tour, it is virtually impossible to get out of it. Everyday life turns into a nightmare based on torture and threats. Yes, because if at the age of 12 you are covered with gasoline on your head and they threaten to set you on fire, you do not say no. You let they rape you. And if they then threaten to set fire to your home and your family too, you get in that dark car waiting for you in front of the gate. From the stories of the victims, in addition to the gruesome nuances, a key factor emerges: these monsters were able to control the minds of the teenagers. It is as if they had somehow become their property. Property of their rapists. Just to give an example: the mother of one of the victims said that her daughter was in danger of getting hurt by jumping off the balcony of the first floor of the home, to go out after her attackers had ordered her to meet them. Another girl managed to escape the abuse after the Pakistani gang set fire to her home. As a result, the family had to relocate: "It was the best thing they could do to me, that of setting fire to my home."

"Used and abused at will"

The abuses took place between 2004 and 2011. The 20 men of Huddersfield, who are all part of the local Muslim community, were sentenced to Leeds Crown Court after three trials: they committed more than 120 crimes against 15 kids and girls. But, according to what emerged from the papers, one thing is sure: many aggressors have not yet been identified. The same applies to the victims. And it's not over here: it dates back to November 16, in fact, the news that another 30 people from the same country are accused of rape, mistreatment, trafficking in children and drugs. They will go to trial in a year.

The gang leader, Amere Singh Dhaliwal, a 35-year-old married with two children, was sentenced to life imprisonment. "The magnitude and severity of your violence far surpass all that I have seen in all my years of work", said one of the judges involved shortly before the sentence. The other beasts of the group took instead from five to 18 years. They used code names like "Dracula", "Bully" or "Beast". According to reports from other jurors in Leeds, the attackers, in particular, were predating young and vulnerable kids and girls. In fact, one of them would have had the mental age of a seven-year-old during the years of the nightmare.

But it's not just Huddersfield. It is all over the United Kingdom: it is Rotherham, Oxford, Rochdale, Newcastle, Keighley, Halifax, Bristol, Aylesbury, Peterborough, Telford, Banbury, Derby. And certainly many other cities.

Since 2005, around 300 men have been convicted of rape, child trafficking and kidnapping. Of these, 99% [1] belong to the local Muslim community. In particular, it is in 84% of cases of people of Pakistani origin. A smaller slice, on the other hand, is of Somali origin. Then there are to be considered that many processes and many investigations are still ongoing. Furthermore, the possibility of some of these gangs being connected to each other should not be ruled out, considering the fact that often the victims were taken to the other side of the country and then sold to other men.

This crime, until a few years ago, was rarely discussed in the country. It represented a kind of taboo. These sexual abuses were often ignored or even buried. In Rotherham, in fact, where 1400 girls have been raped and abused for years, the police [2] have publicly apologized for ignoring the countless requests for help from girls and families for years. Many policemen admitted that they were afraid of being identified as racist by addressing the topic. And so, the protection of institutional reputation or community cohesion came before the protection of these girls.

"We gang victims, covered with gasline and raped"

"A car has approached. Inside there were two Asian men. Later, one of them raped me". Katy is one of the victims of the Pakistani gang in Huddersfield. Victim of 20 animals condemned in total to more than 200 years in prison. They raped, tortured, drugged, kidnapped and sold girls and teenagers for years.

Katy, who is now a woman but during the years of the nightmare was 14, is one of them. She talks with difficulty. He does not want to remember. Alternatively, often, she can not do it. Yes, because often the orcs drugged her without her knowing. "That evening I do not know if I was raped by the other one too. I can not say it". "Were you conscious?" we ask. "No", she answers with a faint voice. Katy lost her virginity with violence. With that man who considered her only as "white trash". "They told us that we were just white whores. They were racists". For more than three years, this was her life. A reality equal to that of other teenagers and girls of Huddersfield (those found are about fifteen but, according to the judges of Leeds, they would be many more). The youngest of them was only 11 years old.

They, the orcs, are all of Pakistani origin and are part of the local Muslim community. They preyed on vulnerable girls with a complicated family situation because it was easier to lure and rape them. And even carry them around the United Kingdom to sell them and make them rape by others. "Once they brought me to Manchester in a hotel. First, they drugged me by putting something in my glass. Then someone came into the room and raped me" Katy says.

"Later they left me there. I did not know how to get home...". This is an example of the everyday life of these girls. Today they are women, but at the time - between 2004 and 2011 - they were only girls. "Have you ever tried to oppose, to say that you did not want to do it?". "Yes, but when I tried, they threatened me. Once they told me they would knock me out of the window" Katy says. The nightmare, for her, will only end at age 17. "I got pregnant with one of them. He was never accused of anything because there was not enough evidence. I think my child saved my life". "Why?" we ask. "Because suddenly it was like I was too old for them. They simply let me go".

But it's not just Huddersfield. It's all the United Kingdom. In total, from 2005 to date, there are about 300 convictions for rape, mistreatment and kidnapping of members of local Muslim communities. And even in these cases the victims are mostly of English origin. Yes, because for these orcs who raped and used them, they were just "white trash". It is impressive to find the same stories from other girls. We talked to Elizabeth and Sammy, victims of the Pakistani gangs of Rotherham and Swinton. Other years. Other men. The modalities, however, the same. "They were all Pakistani. The ladies, on the other hand, were white women converted to Islam" Elizabeth says. "Once I was segregated in an apartment for 10 weeks. Then they started selling me all over the country". We ask hem how many men raped her in those four years. "I can not say a specific number...".

"Once you enter this tunnel, you're already trapped. You can not get out of it. You start to feel like a property of them" Elizabeth adds. "If you were not doing what they ordered you, they threatened you with death. Some girls were covered with gasoline and then raped 30 or 40 times in the evening. You could not say no" Sammy remembers. In Great Britain they call it Grooming scandal, that is: soliciting scandal. "I think it's one of the most dangerous crimes. Because at first you do not know what's happening to you. So, it's like a silent crime. Then, once you realize it, it's already too late. You can not get out of it" Sammy says. "Once they tried to kill me. We were on this car and started going fast. Then even faster. We arrived at the top of a hill and told me that he would throw me off the cliff. Then, in the car, he raped me again. In those moments I was like a dead body in a morgue". They lured you, they raped you and then they threaten you. And they threaten your family too. "Sometimes they told me they would set fire to my house if I did not get on their car", Sammy says. "The police knew, but did nothing. They were afraid of being called racists". At the end of the interview, Elizabeth's eyes are bright. Many years have passed, but that nightmare is still inside her. She will never be free of it. "Today I always repeat that I'm lucky to still be alive".