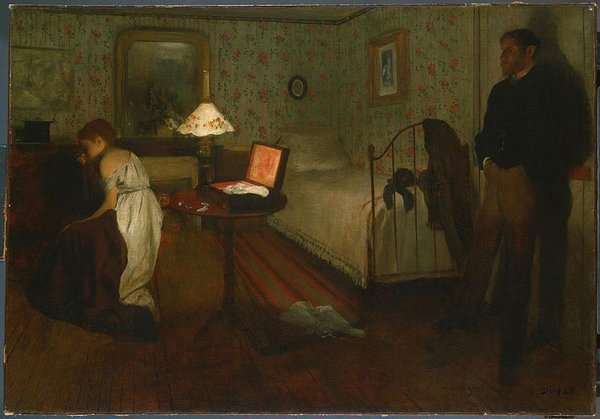 Rape allegations against Afghan soccer officials are just the latest scandal to hit the news. Let us all show solidarity, let us all make change happen

Unless the international community, and I mean people, since Governments have led us all to the state we are in, do something about this, rape and sexual harassment are going to continue, women and going to be silenced, victims of FIST - Fear, Impunity, Silence, Terror.

"OK coach so I got this problem. This girl is accusing me of rape and it's getting serious, like I didn't do anything! She comes into my bedroom all dolled up and comes on to me, kissing, her nails all painted black and wearing a mini skirt, so I kiss her back, then she falls back on the bed, I take her panties off and we have sex. Next thing I know she's going psycho on me! Like what the f*** did she expect?"

"OK son, don't worry, don't say anything to anyone, we keep this in the team. We'll take care of it, just concentrate on your training".

"What happened to you?"

"Look you know you can count on me, just tell me what happened"

"I...I just went to Jason's apartment...we'd had a drink together, like I had one beer...he's real nice, and cute, so we went back to his place. I thought we maybe have a few kisses but that's it, nothing more, just a nice first date. The rest I don't know, it was all hazy. I know I went to his room, then we kissed, then he started going crazy calling me a whore and a slut and slapping me, then he threw me on the bed, tore off my panties and raped me. I was saying No! No! No! Stop! Please stop! But he didn't. Then when he finished he asked me if I enjoyed it, and I just got dressed and ran out of the room. I don't even remember where I went, next thing I knew I was running down the road towards home. I had a hot bath, three hot baths actually, then curled up in bed. I'm confused, I don't know what to do".

"Well my advice is don't. If you tell our group of friends they won't wanna know, they'll refer to you as "the slut", people don't like trouble, they walk away. Jason will be defended by his coach and the men will all pull together and if you go to the cops, they'll insinuate you started it and ask you if you painted your nails, how many drinks you had, what you were wearing, if you went voluntarily to his room, if you kissed him first, if you told him he was sexy, if you said STOP and he heard you, before he started having sex or afterwards... you'll lose your scholarship and end up doing waitress jobs in canteens. Just put it behind you and put it down as a bad experience".

Alison hasn't been out of her room for six weeks. She spends all day curled up in a ball on her bed, staring at the wall, her eyes glazed and hazy, unblinking and fixed, as she relives the nightmare of her gang-rape after she was invited to a Bachelor Party to earn a few bucks doing a pole dance. It ended up with blood everywhere, her vagina and anus torn apart as she lay gasping and throbbing with pain after twelve sex-crazed, coke-stoked drunken thugs, living an orgy of collective testosterone, raped her over and over again, yelling and howling, treating her like a sex toy, then bragging about how many times they "screwed the whore". Today they go on their way as if nothing had happened. Paul got married and went on honeymoon to the Maldives less than twenty-four hours after the incident which took Alison's life. Just two seconds ago, she gave her last breath. Slashing her neck with a razor blade was a better future than what she had.

"Well what's wrong with them? They play soccer don't they? They like a bit of physical exercise. What are they, lesbians? Well then, they get what they deserve. Look don't create any problems here, take this, it's 500,000 dollars, unmarked notes, cash. Just walk away. The alternative is to be thrown into jail, my brother-in-law will see to that believe me".

And so the stories go on. These are the ones we hear, for in some countries over ninety per cent of rapes go unreported, because of FIST, fear of reprisals, impunity for the perpetrator(s), who will use their social network to protect themselves, the ensuing silence of the victim who feels it is easier to keep quiet and come to terms with what happened, even pretending she enjoyed it due to the terror of what will happen if she speaks out. She may even be stoned to death because to have been raped means she was "asking for it" or because her family believes their honor has been damaged and so she will be doused in gasoline and burnt to death.

According to UN Women, 35 per cent of women worldwide, at least, will have experienced some form of sexual or physical intimate partner violence or sexual violence by a non-partner during their lives. In some countries or regions, the figure rises to 70 per cent.

Planet Earth, 2018. Turn a blind eye, sweep it under the carpet, pretend it didn't happen, make out that all is rosy and to Hell with the victims? Or do something about it.

Rape is not OK, it is not normal, it is a violent crime and must be reported because the rapist will do it again. And again. And again.And those who know and do not report are as guilty as the perpetrator. Time to make things happen.