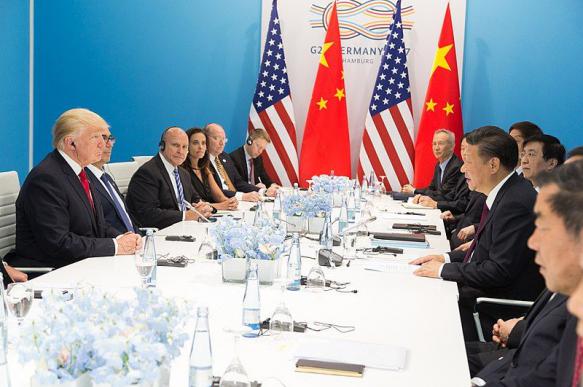 Trump acknowledged reality by naming it, backing it with greater unacceptable toughness than his predecessors.

He urged focusing solely on "national objectives...(d)ispensing with the aspiration to 'be liked' or to be regarded as the repository of high-minded international altruism," adding:

"We should (stop talking about) unreal objectives such as human rights, the raising of the living standards, and democratization."

He called for toughness in pursuit of US geopolitical objectives," saying "(t)he less we are hampered by idealistic slogans (ideas and practices), the better."

US wars in Northeast and Southeast Asia followed, endless others in their aftermath, notably the rape of Yugoslavia, and smashing one nation after another post-9/11, other wars planned, readied to be launched when ordered.

Longterm US political, economic, financial, trade, and sanctions, wars can be as punishing as conflict between standing armies, ordinary people in targeted countries harmed most.

US strategy and tactics use whatever it takes to accomplish its short and longer-term objectives, dispensing with rule of law principles and diplomatic nicities.

Diplomacy and reason with Washington don't work, considered a sign of weakness, not strength. The only language US bipartisan hardliners understand is toughness.

China understands what Russia failed to grasp so far, based on  policies of both countries in dealing with the US. They seek cooperative relations with Washington.

Russia waits interminably for what hasn't happened in over a century. Believing America is its partner is pure fantasy.

The US wants all countries transformed into vassal states, especially Russia and China, the only ones able to challenge its hegemonic agenda, especially united against it.

Unlike Moscow, Beijing responds to unacceptable US toughness with its own counter-actions, the only effective strategy.

US economic war on China's telecommunications giant ZTE and tech giant Huawei Technologies is all about aiming marginalize, weaken, contain, and isolate the country, wanting its aim to become an economic, industrial and technological powerhouse undermined.

According to China's Global Times, the Trump regime's trade war hasn't "shake(n) (Beijing's) persistence and ability to develop" in a hostile environment, adding:

"China's development cannot be easily stopped. (Its) remedies are real and effective...No external force can bring China down and those who try will pay a hard price."

Trump's trade war continues with no signs of easing. According to Reuters, he's considering an executive order, declaring a (nonexistent) national emergency, using it to bar US firms from purchasing products of designated foreign telecommunications and tech companies - with Huawei and ZTE especially in mind without naming them, the Commerce Department then acting against them and any other foreign firms the US may target.

Beijing will surely respond with toughness if this action is taken, what's perhaps coming in the new year, escalating trade tensions more than already, making resolution of major differences much harder.

Trump regime hardliners falsely claim equipment produced by Huawei and ZTE can be used to spy on US government and private entities. If imposed, banning their products will be all about giving US producers a competitive edge.

"(M)ore than one in four businesses (surveyed) said they had been subject to increased scrutiny from Chinese regulators" since Trump launched trade war - so-called non-tariff barriers.

The only solution is compromise by both sides, along with Trump regime hardliners refraining from actions to undermine China's economic, industrial, and technological development - what so far has been unattainable.