April 21, 2019, it was Easter for Christians around the world. In Sri Lanka, six suicide bombers explode simultaneously in six different points chosen because overcrowded with Christians and Westerner tourists. 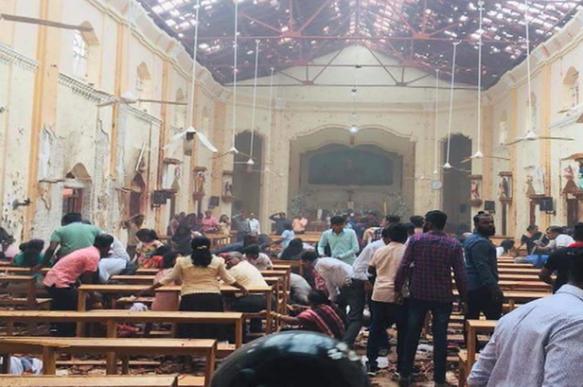 The targets were three Catholic churches in Negombo, Batticaloa and Colombo (the capital), and three luxury hotel in Colombo, the Shangri-La, the Cinnamon Grand and Kingsbury.

Later the same day, five people, including three policemen, died during a confrontation with suspects in Colombo's suburbs who blew themselves up.

The huge manhunt carried out by the Sinhalese authorities led to the discovery of ready-to-explode bombs throughout the capital, at the airport and in the central bus station, and to the arrest of 27 people linked to a local Islamist group, of which little was known at least until yesterday: National Thowheeth Jama'ath (NTJ).

The origins of the group are uncertain and, until today, it was protagonist of attacks against the Buddhist community, including vandalism towards monuments, statues and places of worship, without ever attacking the Christian community, which like the Muslim one is a minority group in the Buddhist-majority country.

The attacks are among the deadliest in the history of Islamism-motivated terrorism: 321 deaths and 521 wounded, according to the latest update.

March 13, 2017, a terrorist group known as the Balochistan Liberation Army, killed 10 workers on an open construction site in Gwadar (Pakistan). Gwadar is a small city that since 2015 has been living a deep transformation that will convert it in to a strategic crossing point of the New Silk Road.

The BLA was not a new knowledge in the country, but the motive was definitely new: from the attacks against infidels and authorities to the targeting of Belt and Road Initiative's construction sites, the new enemy was and is China.

Since Pakistan entered in the 46-billion-dollar China-Pakistan Economic Corridor in April 2015, after years of gradual return to normality, the country has quickly fallen back into chaos, experiencing a terrorist insurgency similar to the post-11 September 2001.

Just like Pakistan, Afghanistan has been expericing a new era of renewed instability since entered in Beijing's sphere of influence.

What does it tie Sri Lanka to Pakistan and Afghanistan? Countries with very different national, political and religious backgrounds, but with an important thing in common: the support for Xi Jinping's dream of a Chinese-led Eurasia and the New Silk Road.

In Beijing's plans Colombo is set to become one of the most important hubs of the maritime silk road that crosses the Indian Ocean. Beijing is planning to invest up to 10 billions dollars in the island state, particularly in Colombo's port enlargement and in the development of an industrial area near the capital. Hambantota port has already rented to Chinese for 99 years.

The port's enlargement is on progress but the industrial area has become matter of controversy after a series of violent anti-Chinese clashes which occurred recently, which also caused a temporary freezing in bilateral relations between the two countries. In Colombo is expected to be built a new district based on skyscrapers, business centers and entertainment, widely promoted all over the country with billboards, and designed to host about 85 thousand inhabitants. Beijing's plan is to build a ìcity inside the cityî able to attract international investments thanks to a Singapore-looking tax regime.

Sri Lanka has been approached by China since the end of the Tamil Tigers-driven bloody civil war, which since 2007 it invests and lends money in the country.

The Sinhalese authorities did not believe that a little known small Islamist group could be able to carry out the country's bloodiest terrorist attack and so they followed the ìinternational trailî since the very beginning. What does it mean the ìinternational trailî? That the terrorists were armed and financed by ìsomeone outside the country" to spread chaos and as a consequence human and capital flight by making the country no longer a safe haven for the new Silk Road.
The fact that the Islamist State claimed responsability for the attacks corroborated the international trail's thesis and, anyway, the union between a small local terrorist group with a larger one to carry out a spectacular attack it is a scene already seen.

Like Sri Lanka, Pakistan and Afghanistan, also Nicaragua has entered into a "strange" vortex of instability randomly erupted in the aftermath of BRI-related pompous announcements.
In Nicaragua, China wanted to build a new canal, capable of rivaling that of Panama, but the project was soon abandoned after a series of anti-Chinese protests marked the starting point of a nowadays' quasi-civil war. The situation is so dramatic that Russia was forced to send experts on asymmetric and hybrid warfares to help the ally Ortega not to fall victim of a new colored revolution.

In the aftermarth, China escaped from Nicaragua, because too much instability means uncertainty of economic return and in the case of Beijing the amount is always equal to several billion dollars because of the purpose to lead structurally deep changes.

China itself has experienced a new wave of unprecedented violence in Islamic-majority regions, particularly in Xinjiang.

Pakistan and India blame each other for the attacks, and even if it is true that Pakistan has a long tradition of state-supported terrorism, as shown by the bin Laden case, at the same time it is true that the country made numerous efforts to close this black chapter since relations with China were intensified.

The attacks were deliberately spectacular and with a high deadly potential, they were meant to scare away tourists, Christians, but above all to scary away investors. Furthermore, the country must face the problem of a disorganized security apparatus: the authorities were warned of NTJ's plans since the beginning of April both by foreign and internal sources, but despite the warning no security measures were implemented for Easter.

While it is quite clear that the main objective of the terrorists, undoubtedly motivated by religious hatred but at the service of foreign agendas, is China, the idea of a second objective should not be underestimated: the Vatican.

Pope Francis is a conservative reformer who, without changing the Magisterium of the Catholic Church by a comma, is the target of an endless smear campaign set in motion by the Washington-based right-wing populist movement.

He is particularly known because of his tries to normalize the relations with China; after the agreement on the appointment of bishops and the announcement of a future visit to North Korea, Vatican diplomacy worked very hard to convince the Italian government to join the new Silk Road. Why? The Vatican has understood that the West is moving towards a post-Christian society and that the future of international relations, and of the Catholic Church itself, is elsewhere: in Latin America, in Africa, in Asia.

The Vatican has bet everything on China, which by 2050 it will turn into the world's largest Christian country due to demographic dynamics and religious conversions, foreseeing that the "Christian bomb" ready to explode in the coming years will inevitably change the Chinese Communist Party's Orwellian approach towards religion, Christianity in particular.

Islamist terrorism? Yes, the bombers undoubtedly acted in the name of faith, killing them because they were Christians, because they were Westerners, but at the same time we need to frame the whole context, keeping in mind that terrorism over history has always been supported by political sponsors, following specific foreign agendas.

The building of the New Silk Road advances at a record pace, but between Xi Jinping's dream and reality weighs the unknown of the American empire and its allies, predominantly Islamic countries. We don't know if the New Silk Road will actually be built, but we know one thing: expect a lot of blood on it.