Brazil: The Holocaust of indigenous peoples

Brazil: The Holocaust of indigenous peoples 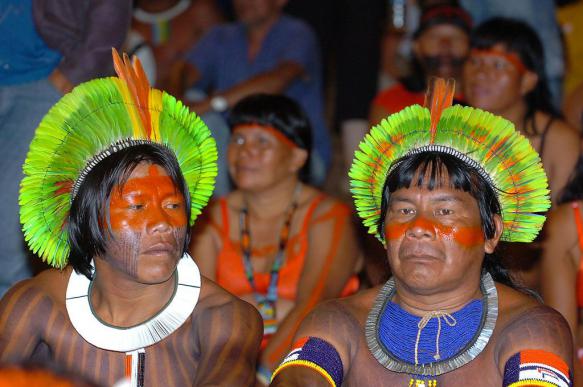 As the rest of the world gets ready to celebrate the International Day of the World's Indigenous Peoples, in Brazil a Holocaust is under way

August 9 is the International Day of the World's Indigenous Peoples, this year's event concentrating on indigenous languages. As the rest of the world prepares to celebrate and discuss ways to document language, customs and tradition, Brazil's isolated indigenous tribes prepare themselves for a massacre.

Shooting kids to stop them growing up

In the Brazil of president Jair Bolsonaro, illegal miners, timber merchants and narco-traffickers enter the forest and massacre indigenous peoples to steal their land and resources. Day after day there are tales of barbaric murders, even of children "to stop them growing up". And what happens? It continues.

In Brazil, the funds available for FUNAI, (Fundação Nacional do Índio, or National Indian Foundation) have been slashed, meaning that the institution has less power to monitor encroachments on indigenous territory and protect them from the greed of the savages sent to massacre them.

Not only in Brazil

A similar situation has been reported in other Latin American countries. Little is done by governments, probably because their members have been corrupted, to stop the local timber merchants, ranchers and illegal miners from literally invading these territories where indigenous people have been living for thousands of years in peace and harmony, and decimating them with the thunder and lightning of their firearms, punctuated by the screams of terrified women and children, raped and killed for fun and to stop them populating their lands. The lands are then stolen from them and signed over to the invader, who gets rich from the shedding of human blood.

If this happened in Europe, imagine the outcry. But Europe, Fortress Europa, could not give a damn, apparently. Where is the high and mighty European Union which sticks its nose into everyone else's business? How many more indigenous families have to be destroyed for Europe to say anything? As for the United States of America, well if we read the book more closely we see that apart from the local agents, energy, oil and mineral companies with ties to multinationals abroad are also main culprits. Surprise surprise, don't tell me this is the hand of Uncle Sam again, wishing to break up the Amazon and grab its resources. At whatever human cost.

The government of Venezuela, socially progressive in so many areas, has done nothing to formally recognize the existence of isolated indigenous peoples. This means that groups such as the Yanomami, Hoti and Uwottüja are unprotected. In fact, the government of Venezuela has even given permission for mining activities in the area. The governments of Paraguay and Bolivia have also apparently done nothing to protect the Ayoreo people, isolated indigenous groups in Gran Chaco region. They are being attacked and murdered.


This has been going on for decades. Illegal miners dessecrate regions looking for minerals and leave them either uninhabitable or toxic having totally destroyed the ecosystems there, in which the indigenous people and so many species of animals and plants survive. Farmers carry out deforestation on a massive scale, removing the forest and planting grass so that cattle can roam freely. In these areas, cows reared for meat are worth more than human lives.

Many of these companies operating in other Latin American countries are Brazilian ones with links to their bedmasters abroad. In the Brazilian Amazon, instead of the wonderful sounds that nature has produced for millions of years in this perfect biosphere, the only sounds we hear today are the screams of women and children, the terrified cries of the animals as Brazilian savages mow them down with machine guns. Nothing is done to stop this, evidently, by the government of Jair Bolsonaro.

Faced with this outrage, I propose that it is time for the international community to take up this issue. If these countries are too cowardly or too inept to do something to protect these peoples, then surely someone else must. I propose that all goods and products from these countries be boycotted while there remains one single story of illegal trespassing on indigenous lands.