Kashmir on the World’s Conscience 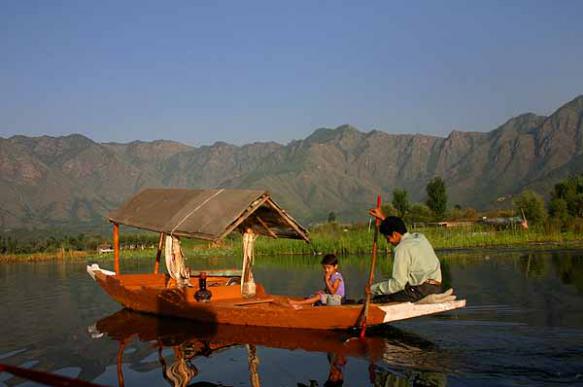 Is Nazism revisiting the planet? Is its revival taking shape in a Hindu avatar in Indian Held Kashmir (IHK) now? Can the world not read the writing on the Kashmiri wall or is it callously blinded by its obtuse, self-serving geopolitical, geostrategic and geo-economic interests in a manipulative India?

The hapless, strangulated, incarcerated Kashmiris would like to know where the world stands today!

PM Modi's audacious land grab in Indian Held Kashmir (IHK) carries the hallmarks of a fascist regime overreaching itself senselessly. Its policies are defined by its ultra-nationalism and self-proclaimed religious superiority and exclusiveness. It is essentially the RSS' Hindu versus Muslims mindset at play. Muslim invaders conquered the subcontinent, dispossessed the Hindus and reigned supreme for centuries. That ostensible historical ignominy hurts Hindu sensibilities and fuels this anti-Muslim rage even today. The RSS-BJP Combine intends to undo history and wants the Indian and Kashmiri Muslims to atone for, pay penance today for all the perceived historical slights the Hindu Nation might have suffered at the hands of those erstwhile Muslim rulers. That is where the kernel of this torrid, irrational Hindu bitterness against the Muslims lies and wherefrom all this self-consuming resentment and loathing for everything Muslim emanates. These sentiments were further aggravated by the Partition of the subcontinent which for them symbolized the splitting of Bharat Mata or Mother India's body into two. RSS-BJP Combine and PM Modi are thus on a vicious, vengeful crusade to not only "undo" history but to revive and re-establish the lost glories of both Akhand Bharat (Undivided India) and the Hindu Rashtra/Nation - albeit mutually exclusive in concept!

The RSS-BJP Combine needs to get out of this twisted and warped time and space bubble they have so mindlessly ensconced themselves in. They need to get "back to the future"!

PM Modi's ostensible annexation of J&K and Ladakh is a strategic miscalculation with massive implications. He has erroneously assessed Pakistan to be economically enfeebled, diplomatically isolated thus unable to pursue war, and that the strategic environment was ideal for his "grand geopolitical and geostrategic manoeuvre". He is in for a very rude shock. India's impudence and arrogance too are utterly misplaced. Is it a gross misperception of its own political, economic, diplomatic and military prowess and clout, or does it, like Israel in Palestine, consider itself powerful enough to be above all international norms and laws? Is the US' tacit support so strong and enabling that it feels, like Israel, emboldened enough to trash the Rules-based International Order and all UNSC Resolutions with impunity?

However, this situation simultaneously creates windows of opportunity for all players to act before PM Modi can actually bring this deadly and ghastly game of constantly rising geostrategic and geopolitical stakes to an ominous closure. Thus, the Kashmiris, Pakistan, the UN/UNSC/P5 etc as well as PM Modi's India are all now in a veritable race against time.

PM Modi is currently in the Consolidation Phase of his Kashmir (mis)adventure. His very tight window of opportunity compels him to consolidate his political gains in J&K and Ladakh and establish unopposed control there immediately. He must do so before the Kashmiris rise up in rebellion or the UN/UNSC/P5 intervenes to unravel this most foolhardy and treacherous 'geopolitical gamble" of his political life. For this to succeed he needs President Trump to manage and condition PM Imran Khan's responses, thus gaining critical time and space for him.

The Kashmiris, on the other hand, must rise immediately and protest through acts of civil disobedience, defiance and fight for their inalienable Right of Self Determination which is enshrined (and resting pathetically) in numerous UNSC Resolutions. An indigenous Kashmiri resistance movement is on the cards. It will physically challenge the annexation and scare all potential aliens/investors away.

Pakistan, in this time frame, must re-energize its political, diplomatic, moral and media support to the just struggle of the Kashmiris. It must not allow the world's conscience to tide over this potential human tragedy in Kashmir. The Kashmiris fear a brutal genocide that will make the Rwandan genocide look like a school play. They fear being ousted from their households, forced into Refugee Camps along the LOC with Pakistan (like the West Bank in Palestine) and then shunted across into AJ&K! Pakistan must sensitize world opinion to this very avoidable humanitarian calamity. If not addressed promptly and decisively it will lead to popular indigenous resistance against the Indian Occupation Forces, cross-LOC skirmishes and to possible war in this most sensitive nuclear flashpoint of the world!

The UN/UNSC/P5 must not accept this travesty of the Rules-based International Order. It must re-establish and enforce the supremacy, inviolability and applicability of the UNSC Resolutions on Kashmir forthwith. The UN/UNSC/P5 must act NOW intrusively to forestall the ghastly Genocide that threatens the Kashmiris. It must save them further from forced migrations, rapes, lynching, incarcerations, deadly cordon and search operations, the missing persons' episodes, beatings, the blinding "pellet guns", communication blockades, loss of all personal freedoms, the engineered demographic changes etc BEFORE all this becomes a fait accompli for them and the world.

The China Factor however looms large and ominous in the IHK conundrum with its obvious strategic connotations!

Is PM Modi replicating what Hitler did to the Jews in the last century? Is he aping PM Netanyahu and his policies in Palestine in this one? Has the world not learned its bitter lessons from the appeasement of bullying fascists? Post- World War Two, the US led West has been inconsistent in dealing with fascist and genocidal regimes. It has been very lenient in Palestine/ME and very tardy and hesitant in Srebrenica and Rwanda. The world now stands askance wondering where the US-led West's and the oil rich Arab monarchies' values will stand - for their crass economic and commercial interests in a belligerent, genocidal and expansionist India or with humanity, humanitarian values, a Rules-based International Order and above all with the Right of Self Determination for peoples under brutal military occupations!

Whichever way the international community leans, the strategic implications for the future of Kashmir and all oppressed peoples of the world will be colossal!

The author is a retired Brigadier from the Pakistan Army