Millions Hungry and Food Insecure in the US 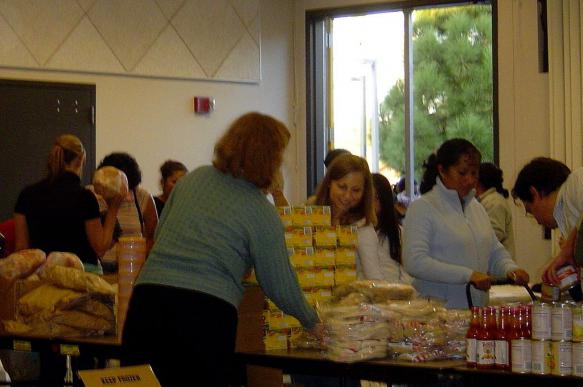 Why? It's because both right wings of its war party devote most of the nation's discretionary income for militarism, maintaining the Pentagon's global empire of bases, and endless aggression in multiple theaters - along with bailouts for and handouts to corporate America.

In the new millennium alone, countless trillions of dollars went for the above interests, combined with tax cuts for the rich, while food stamps and other social justice programs are fast eroding to help pay for them as the national debt soars by over $1 trillion annually.

Most US households with one or more working members have little or no savings - leaving them vulnerable to hunger and homelessness from one or more missed paychecks.

According to Feeding America, 79% of US households the organization aids rely on "inexpensive unhealthy food to feed their families," 84% of households with children functioning this way.

Force-fed neoliberal harshness by Republicans and undemocratic Dems contributed to 58% of FA's client households having one or more members with high blood pressure, 33% affected by diabetes - these numbers much higher among households with seniors, 77% and 47% respectively.

Nearly half of FA client households have one or members in "fair or poor health."

Because of unemployment or poverty wages, one in six FA client households "experienced a foreclosure or eviction in the past five years."

According to the US Department of Agriculture in 2018, food insecurity affects 37 million Americans, including over 11 million children - the numbers likely way understated.

Feeding America explained that impoverished households and others above the poverty line experience food insecurity for inadequate ability to buy what's needed, adding:

"Taken together, these issues are important social determinants of health" and well-being - fast deteriorating in the United States of I Don't Care, the world's richest country with the greatest wealth disparity among developed nations.

The state of the nation is shameful, serving its privileged class exclusively, exploiting most others to benefit its well-off members.

Do Something.org discussed "11 facts about hunger in the US," saying the following:

Hunger is caused by poverty and inadequate financial resources, a nationwide problem.

"1 in 6 American children may not know where their next meal is coming from."

Food insecure children are at greater risk to develop physical and emotional health issues. They perform poorly academically and in physical activities.

People of color (Blacks and Latinos) are disproportionately affected by hunger and food insecurity.

The states with the highest rates of food insecurity are Mississippi, Louisiana, Alabama, New Mexico, Arkansas, Kentucky, Maine, and Oklahoma.

"(H)ouseholds with children ha(ve) a substantially higher rate of food insecurity" and hunger, said Do Something.org.

US Census data show around half of US households are impoverished or bordering it - a permanent underclass in the world's richest country, young children and the elderly most affected.

It's the shame of the nation - a let 'em eat cake society, uncaring about the vast majority of its citizens.