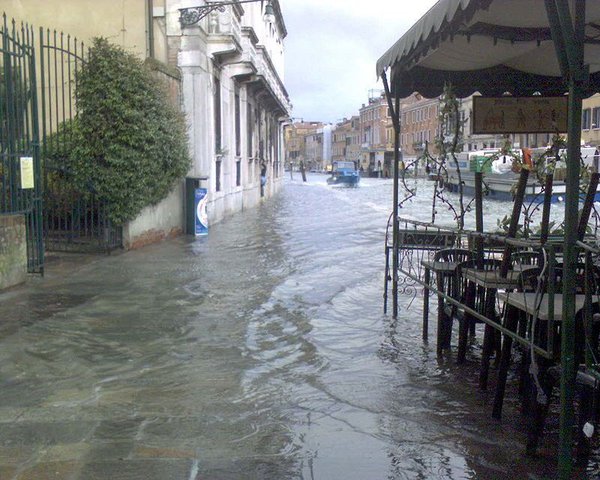 The Acqua Alta that drowns Venice in these rainy and gray days of November is unfortunately also a representation of the Italian political, social and economic situation. So Venice finds itself with alarming frequency at the mercy of ever larger tides that disfigure and ruin it, without those in charge being able to find a way to protect it, so Italy finds itself ruled by parties that seem to ignore everything that is of national interest.

The Italian Democratic Party (the former communists) has long since replaced the Soviet Union with the European Union in its political idea, envisaging transfers of national sovereignty to Brussels that would make Italy a succulent prey shared at least between Germany and France and perhaps even other European nations.

The 5 Stars Movement was the great hope of Italy: anti-system by vocation, it promised to our beloved country a moral reawakening that would give us dignity and honor. It ended up doing a government with just that DP that it said hated and despised, pointing to it for years as a bilge of malfeasance and corruption and therefore as an enemy to be destroyed.

To draw now the major political advantages from the exasperation of Italians for the uncontrolled immigration, the numerous crimes committed in Italy by foreigners who enjoy here a de facto impunity, almost due "to immigrant merits", the economic crisis that continues making the future uncertain for many people, the submission to Brussels that the parties in office always mistaken for good governance, to take advantage of all this are the Northern League of Matteo Salvini and the party of Giorgia Meloni, Brothers of Italy.

It is such an obvious success that the DPs and 5Stars are terrified of it and do not want new elections despite the fact that it is clear to everyone that they have formed an inept and contentious government, unable to successfully face the country's problems: but the fear of the judgment of Italian voters is greater than the good common sense that the situation would require.

In Italy too, as in other nations, there is a deep State, with indefinite and uncertain boundaries, but which nevertheless envelops politics and allows the functioning of that other State, the one under the eyes of all, that visible in the light of the sun.

Augusto Sinagra, from the height of his venerable age and experience, has witnessed great events in Italian politics and is among those who can help us to see the things in the right perspective.

Q) What do you think of Matteo Salvini and his League? And about Giorgia Meloni?

A) Matteo Salvini is an intelligent man and an excellent communicator who has tried to find a solution to one of the most dangerous present-day emergencies, namely that of a mass invasion of the national territory desired by external powers and internal complicity or stupidity. I believe (and I also hope) that Matteo Salvini achieves further and even more flattering electoral successes. I think to the next regional elections in Emilia Romagna. I've known Giorgia Meloni for many years, she was still a girl. She is a very active woman who has greatly improved in her personal and political education. However, not everyone around her deserves consideration. Giorgia Meloni should regain greater credibility by having the strength and loyalty to recognize her past mistakes, which are very serious errors: the trust in the Monti government, the favorable vote for the so-called "Fornero" law, the balanced budget and the mechanism of economic stability. You cannot say now that what you voted for in Parliament was all wrong. The fact that Meloni (if the press has correctly reported) has declared herself to be against the nationalization of ILVA is very perplexing. Personally, I cannot appreciate who - although not required - says I'm not a fascist when she had not had these "embarrassments" until recently.

Q) What judgment do you feel to express about the 5 Stars after the change of alliance following the August crisis and their political and economic ideas?

A) The electoral success of the M5S at the latest political votes (now reduced to a national average that can be generously estimated at around 10%) was determined by a reaction to the previous bad politics. The M5S has no political planning and is lacking in "managers" with even minimal capacity. It depends on a capital company which also includes an exponent of international finance. My idea is that the M5S was created (aboard the "Britannia" or overseas, it does not matter) to convey dissent and protest so that things gottopardescamente [1] remained as they were. I'm not talking about Grillo because I don't deal with jokers. My judgment is clearly negative as well as to have the M5S planned for some time and forced the government crisis of August 2019. They are the secular arm of economic liberalism and international capital. I cannot judge their political and economic ideas because they have none. They ignore the difference between capitalism and communism.

Q) What is the Italian Democratic Party, politically and socially? What are the reasons for its apparent continued success even in failure?

A) The DP has managed to rule and still rule against the popular will through the support of certain circles of the judiciary. But, above all, thanks to the support of Bernardo Mattarella's son who was elected precisely because of the DP's choice. The DP today represents and serves the interests of the grimmest bourgeoisie and the most vulgar right wing. What does DP represent politically and socially? It is a public danger to the economy and to workers. To those of the DP, only the hand remained of "left". How do you explain success even in failure? Partially, I have already answered, for the rest it depends on a tried and tested invisible system of under-power, which manifests itself servilely in the most widespread press and television by now enslaved professionally and morally to the "master".

Q) It seems that Donald Trump is chasing heads, even concerning the Italian part of Russiagate. With what possible results?

A) I don't know Donald Trump what kind of "hunting" he gave himself. However, Italian responsibility is increasingly emerging also at governmental and sub-government level in having established a slanderous mechanism against the US President to favor a character like Clinton, mentally unstable and warmonger. It seems that the Lord put his protecting hand on the world.

Q) How long could the current government, the Conte bis, last as standing more on a desperate need than on a true commonality of purpose?

A) The government in office has a very short duration and the desperate need to which it is addressed is to arrive at the time of appointments in Public Bodies, in the State administration and in the "parastate" so that the DP, although destined to further electoral collapse, can continue to govern. If Bernardo Mattarella's son [2] had institutional sensitivity and due impartiality and independence (which he has long lost), he should stress the resignation of the government. Of course, this would not be completely in line with the Constitution, but the aforementioned character has already shown that he has a very personal idea of the Constitution.

Q) Why do we fail to express, as a people, a stable government that is up to the problems and challenges that could even lead to the destruction of our nation?

A) The so-called "strong powers", the condition of colonial submission to which Italy has been subjected since September 3, 1943, the interests of international finance and monetarism, today well represented by this European Union, which is not the European Union that was wanted and are wanted, all of them do not want a stable government in Italy that knows how to face the needs of a Nation that is really sinking into the water. A stable government would first recover its monetary sovereignty by demonstrating that the so-called public debt does not exist. But, after the deaths of Enrico Mattei, Aldo Moro and Bettino Craxi (but I would also add Giuseppe Pella, of whom I would like to say that "still in my mind and in my heart is the good and dear paternal image"), that as everyone knows they were murdered, will there be someone who will want to assume the necessary responsibilities at the risk of their own life?

Q) Why have many Italian women reacted with hatred and contempt towards the poor Pamela Mastropiero and Desirée Mariottini, but with an even affectionate understanding for the immigrants who killed those two unfortunate ones?

A) It is very difficult to answer this question. About the why many Italian women have reacted almost contemptuously towards those poor girls Pamela Mastropietro and Desirée Mariottini and vice versa with almost understanding towards the murderous laymen (so-called "immigrants" and not only), it can only be ascribed to serious pathologies of mental distortion and morality caused by the general climate of subversion of every most elementary civil and ethical value. On the other hand, when it comes to affirming, as does Mrs. Cirinnà, "God, country, family, what a shitty life" [3], it is clear that an answer to the question could better be given by a psychiatrist.

Q) To conclude, what does "Homeland" mean in today's Italy and what to do to reinvigorate its meaning?

A) Unfortunately, the word "Homeland" today represents very little. Its meaning and its preceptive content could be recovered only by recovering the sense of solidarity, of social justice of personal and national dignity. But above all recovering the knowledge of the past in its truth and with all its lights and shadows; recovering the awareness of the present and that is of what it indicates as mandatory duties on the part of the individual and society in terms of an intransigent defense of the national interest; having, finally, a planning or political proposal that takes into account the national interest, starting with the defense of work and workers' rights. Homeland is honored and lived first with work. For the rest, to say what it is, the words of Alessandro Manzoni are enough: "One of arms, of tongue and altar, of memories, of blood and of heart".

[1] A reference to the novel "Il gattopardo" by Giuseppe Tomasi di Lampedusa: everything must change in order for nothing to change.