While the world struggles under the baton of an imposed patriarchy, with women trying to remain unjudged and fly free, and men to some extent trying to create a more  "womancentric" approach to relationships or otherwise, the lives of the mystic women born in India have already set huge examples, albeit of a divine sort, of how love, sex and relationships can be trendsetting, beautiful and free despite the bondage of love, which is rather empowering to the human lives, being dealt with. 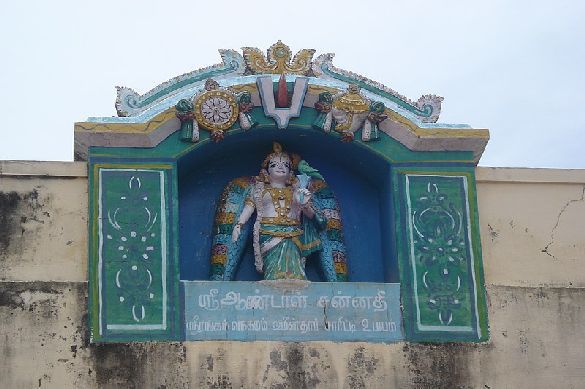 After Akka Mahadevi and Karaikkal Ammaiyar, this article takes up the life of Aandal. Known as Aandal, Goda or Kodai, she happens to be the only woman saint among the twelve Alvars. The Alvars were basically the Srivaishnava saints of the Tamil region in India, who lived between the 6th and the 9th centuries. The term "Alvars" literally meant, "immersed in divine love" and they were all devotees of Lord Vishnu, otherwise also known as the preserver of Creation, even as Lords Brahma and Shiv are known as the Creator and Destroyer, respectively. The three, forming the "Holy Trinity" in the Indian pantheon, of divine worship.

It is important to note, that the Alvar saints propagated the philosophy of Vishistadvaita in their songs. While the philosophy of Dvaita or Dualism believes that there is a sea of difference between the Soul and the omnipotent God; it asks the soul to be a believer in the reality of the world and aspire towards the attainment of the omnipresent God through righteousness. On the other hand, the Advaita Vedanta says that world is unreal and illusory. Advaita means non-dualism and hence, it believes that there is no difference between the Soul and the Oversoul and that, once the Soul learns the reality of this illusory world, it becomes One with the OverSoul.

The  philosophy of Vishishtadvaita merges the two principles and believes that, while the OverSoul is eternal, it also includes the elements of Plurality. Thus, this world is an extension of the Eternal nature and bliss can be realized through devotion, praise , worship and contemplation of this divine perfection. Love for the divine was thus, a natural outcome of the philosophy of the Vishishtadvaita and there was no barrier, whatsoever, of caste, creed or sex among the Alvars, believing in absolute devotion.

Aandal, being a  woman pushes this boundary further by expressing her conjugal longing for Lord Ranganath or Vishnu. Her body, her sexuality and her emotions, revel in the thoughts of an impending marriage with Lord Vishnu. Legend has it, that Aandal was found as an infant, under the bushes of the holy Basil plant by Visnucitta Periyalvar, himself a priest and one of the twelve Alvar saints. He lovingly brought her up as her own daughter. It  was a part of Visnucitta's daily ritual to weave garlands for Lord Ranganath's deity. Aandal, being "in love" with Lord Ranganath, would wear these garlands, before her father could offer them to the temple deity. One day, Vishnucitta came to know of this "desecration" as was distraught. He scolded Aandal and asked Lord Ranganath for forgiveness. However, soon, Lord Ranganath himself appeared to him in dreams and told him, that the garlands were "doubly dear" to him after they had been worn by Aandal! Visnucitta accepted Lord Ranganath's wish and allowed his daughter to wear these garlands.

Obviously, Aandal's love for Lord Ranganath intensified further, and when she came of age, she refused to be married to anyone but Lord Ranganath, for whom she was already expressing her love in an unorthodox manner:

"My swelling breasts I dedicated

To the Lord who holds

Longing for her divine lover, so that her love may be consummated, Aandal's  body becomes the site of revelry:

"Only if he will come

To stay with me for one night

If he will enter me

So as to leave

The mark of His saffron paste

Mixing, churning, maddening me inside

As my body and blood

These songs openly indicate the expression of an uninhibited desire....a desire unchecked by social norms. Her femininity is starkly feminist because she does not need anybody to tell her the rights and wrongs of her feelings. Needless to say, her father's anxiety grew by leaps and bounds. Lord Ranganath, it is said, asked him to bring Aandal to the Srirangam temple as a bride, where on an auspicious day, he would marry her. When Aandal was ceremoniously brought to the temple and taken to the inner sanctorum, she merged with the image of her divine bridegroom and disappeared.

The overwhelmed Visnucitta was consoled by a divine voice which proclaimed that his daughter indeed, stood married to the lord. He was asked to consecrate a temple with images of Aandal and Ranganath. Aandal has come to be regarded as Bhudevi, or the Earth Goddess, the consort of Lord Vishnu.

Aandal's songs are compiled in Tiruppavai, a collection of 30 songs and also Nacciyar Tirumozhi, having 143 verses. Unlike Akka Mahadevi, Aandal does not negotiate marriage. She stands resolute and chooses a direct resolution of the issue. However, their bodies, or their sexuality are never an embarrassment to them. The body becomes the site, through which, devotional love is expressed and bravely! Aandal's love is amazingly frank and her unfulfilled longings have never been the cause of shame. She is set, in her mind, to be a bride and this legitimacy of love, incorporated her creative freedom in the modern day rituals of women, where the songs of Aandal are sung and celebrated in marriages by single and married women, alike!

It is to be noted that all these women mystics stood extremely free with regard to the choices they made in life. While the initial waves of the feminist movement rocked the western world in the 19th century, it is equally refreshing and amazing to see, that these Indian women were already articulating feminism actively in their lives, without even feeling the need to be vocal about it! So respectably resolute were they, that even the divine bowed to their wishes. These examples, do not only prove the legitimacy of choices in  Indian women's lives, they also indicate the existence of a feminist divinity, where the desires of women were fulfilled by men claiming to love them, either as wives or daughters! This, I feel is a very important recognition in the entire culture back then, which lends it a beautiful feminine mystique, as it were. Parched like dry lands, love for most of these women becomes the pollen of bloom, the petrichor of the body and the first dewdrops of the freshly arrived winters. Love here was not demeaning. It was a fulfilling emotional experience. It indicates that women in India, were relatively free in the exercise of conjugal choices. Where then, have we, in the years coming after, gone wrong!?

Continued to be celebrated in poetry and festival; Aandal's life and works continued to inspire lives and creation of countless women. Shri Aandal was a 1948 film, documenting the life and times of Aandal. However, no prints of it survive and it is a lost film. Meanwhile the mystic journey continues in memory with her songs resonating in most Tamil Households during the months of Marghazi, i.e. December to January.