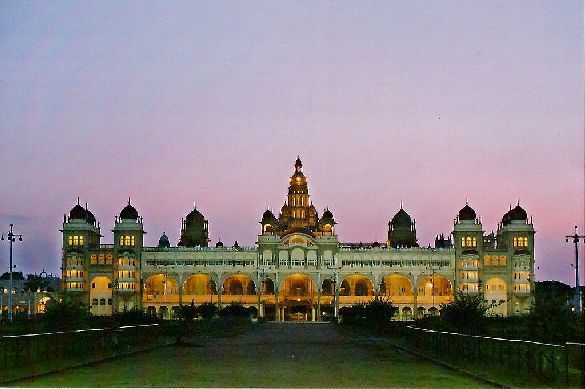 "O great Mother of the world!

How did you lose your heart to a person,

Who negotiated a number of challenges?

(In his incarnation as "Narsimha " or the Lion God) he revealed

The intestines of the demon...

O great one! How did you lose your heart to such a person?

(As Vmana) he begged as a poor Brahmin.

(As Parshurama) chopped off the head of the mother, who gave him birth.

In Gokula, (as Krishna) he enjoyed the company of women.

O great one! how did you lose your heart to such a person?

Lord, who bestows grace and affection on his devotees.

O great Mother of the World!

How did you lose your heart to him!?"

(Giriyamma, in the above song, describes the Dasavtara: the ten incarnations of Lord Vishnu and enquires, how Lakshmi married Him!?)

The Dvaita school or the school of thought, which follows the principle of Dualism as opposed to the philosophy of the Advaita(non dualism) is as important to the spiritual structure of the Indian spiritual beliefs as the latter. Founded by Madhvacharya(1238-1317), the system believed, that the Supreme Soul and the individual Soul, were two distinct entities and that, the latter must aspire to achieve the former. Lord Vishnu, became the personal deity  for the followers of this school.

Flourishing around the regions of Karnataka and Andhra Pradesh, the Haridasas(literally, " servants of Hari" or "Vishnu") were a strong spiritual presence during the medieval period of India's history. The Haridasas had two groups: One group was called , the Dasakuta and was responsible for spreading Madhavacharya's philosophy among the people in the vernacular language. The second group was known as the Vyasakuta, had people who were conversant with the Vedas and the other spiritual works. The second group also propagated the Dvaita philosophy, but they used a new literary medium called the  Dasa Sahitya, which meant " literature of the servants of the Lord." Their compositions were called "Devaramanas" or the "names of the Lord."

Narratives tell us, that the Haridasa movement, began during the times Sripadaraja, when the ancient texts became incomprehensible to people, beacause of Sanskrit language, in which they had been written. It was at this time, that the Haridasas (also a part of the immediate cultural revival in medieval India), brought out the spiritual gist of the texts in the form of simple musical compositions, in the common language of the people.

One such Haridasa woman was Helavanakatte Giriyamma(17th-18thc.) An ardent devotee of Lord Ranganath(a form of Lord Vishnu), she is still fondly remembered for her songs of devotion, which are popularly sung till date. Her compositions were in Kannada.

Oral narratives, tell us that, having lost her parents at a very tender age, she was brought up by her uncle. Although, young girls were not fortunate enough to be educated in medieval India-a practice starkly opposed to the ancient vedic times-Giriyamma was lucky enough to have received education at home. The deeply spiritual atmosphere, at home, inculcated a deep sense of devotion in her. She was married at the age of 10-12, but was rather averse to leading a mundane family life. Next, she persuaded her husband to marry another woman and began to lead an ascetic life. Since, she was childless people openly ostracised her and told her that she was "unfit" to compose songs , in praise of the Lord. It was her own teacher, who having seen her palms, commented that, she had  palms and lines befitting those of  Kausalya(Mother of Lord Ram) and Devaki(Lord Krishna's mother) and encouraged her to reflect on the childhood of the Lord of the Universe. Interestingly, unlike many other women saints and mystics, she received full cooperation from her family to pursue her spiritual goals. It is even said, that eventually, through spiritual discipline and devotion, she began to perform miracles and people would flock to her for relief.

Her songs, as is believed, came to her through divine inspiration and portrayed her tender love for her deity, whom, unlike the other women mystics, she regarded as her child. Giriyamma also stands apart as an example of a woman, who, though, belonging to a very humble background, yet lived an extraordinary life. She was an ardent spiritual seeker and like most women mystics, sought answers about the Oneness of the human soul with the Supreme Consciousness, instead of living a mundane life. Love for the Universe keeps her and many more like her alive even after centuries of passing away. Giriyamma , in her songs makes ample references to the stories of Indian epics, the Ramayana and the Mahabharata.  Her songs still echo in the voices of the women of the Haridasi community. Known to Karnataka, but not as avidly famous outside of the region, there have been books and serials devoted to her.