There is no business like show business: The MH17 trial in Holland

The Dutch have always been good at business and that includes show business. Over the past decades, Dutch producers have been quite successful peddling their wares. Mostly TV productions and formats and musicals. However, show business is more than just TV and musicals. The Dutch capital The Hague (the self-styled "City of International Peace and Justice"), seat of the International Court of of Arbitration, the International Criminal Court and the ICTY, is the venue for successful show trials. On March 9, a new show trial will begin, the MH17 case. This case against four defendants is handled by The Hague District Court (Rechtbank Den Haag) in its special high-security facility near Schiphol Airport. Dutch state TV will take care of live streaming so that the show may be watched anywhere in the world. 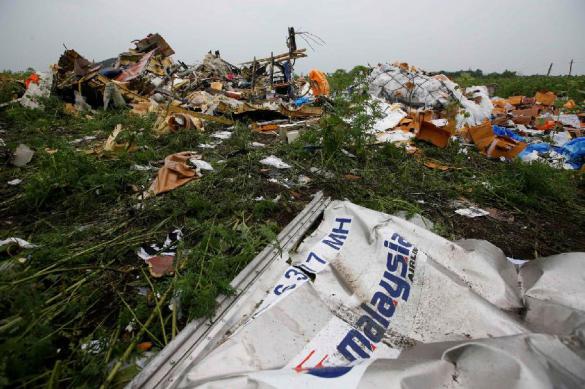 It would seem the case is simple and straightforward:

The question remained as to who brought it down and how? One day after the crash US President Obama, speaking at a press conference, claimed the airliner had been brought down by a surface-to-air ("BUK") missile fired from rebel-held territory in Eastern Ukraine. On July 19, Dutch newspaper De Telegraaf (generally considered to be yellow press) carried a big picture on its front page, showing Russian anti-Kiev regime rebels with the text "Murderers" (moordenaars). The tone had been set and the public in the "West" was being made to understand that the "Russians" had killed three hundred innocent men, women and children. The official narrative rapidly became more and more complex, because the public needed to be enlightened as to the (supposed) ties between the Eastern Ukrainian rebels and the Russian government at Moscow. This narrative then provided the justification for putting the blame for downing the MH17 on the Russian government and even on Vladimir Putin personally. Predictably, many in the "West" were swallowing the official narrative, duly repeated by an obedient press and mass media, hook line and sinker. Divergent eyewitness accounts by people living in the area where the airliner came down were swiftly suppressed in  the "Western" outlets. None of these people had seen any surface-to-air missile, but they did see at least one MiG-25 fighter plane, one of which was supposed to have fired on MH17 and brought it down. It so happens the Ukrainian Air Force operates MiG-25 fighters, but also BUK surface-to-air missiles.

What the "Western" press took much care not to mention or to focus on was the sequence  of events in the Ukraine preceding the downing of MH17. In November 2013 rebellion broke out in the Ukrainian capital, Kiev. Sponsored by a wide array of "Western" NGO's, US and EU government agencies, with protesters receiving regular payments for keeping the city's main square occupied, the "Euromaidan" in February 2014 forced the newly elected Ukrainian government out. A new government was installed, mainly according to US specifications. Led by chocolate millionaire Poroshenko, the new government set out on a collision course with Russia, intimating it would seek to become a member of both the EU and NATO. This would be a disaster for Russia's strategic position, if only because the key Russian naval bases in the Black Sea (of vital strategic importance to Russia) were located on the Crimea, a part of the Ukraine since the 1950s. Seen in this light, the virtual US takeover of the government of the Ukraine was a master stroke. Not wanting to wait for matters to develop in an unwanted direction, the Russian government acted swiftly and decisively. After all, the US would do the same thing if another great power would take control of the government of Panama through some kind of color revolution. Indeed, in the winter of 1989/1990 it did precisely that and invaded Panama in order to capture local leader Manuel Noriega and replace him with a more pliable figure. Of course, the lofty-sounding name ("Operation Just Cause") for this brutal violation of international law could hardly obfuscate its true character.

By contrast, in order to protect its vital interests in the Crimea, the Russian government operated in line with recent practice of international law largely resulting from US-sponsored actions. Under these rules it had become lawful to annex disputed territory (like Morocco had done in 1975 and Turkey in 1980) and to carve up UN member states (Yugoslavia in the 1990s, Sudan in 2005). Thus, when in February 2014 in quick succession Russian troops were sent into the Crimea, the local leadership announced its secession from the Ukraine, and in March 90% of the population voted in favor of joining Russia, the US was taken by surprise. Apparently no one in the Obama regime had foreseen that particular chain of events, blocking the US plans to deprive Russia of its strategic positions in the region. Howls of protest and indignant anger about "violations of international law" were heard all over the "West" and the Obama regime was determined to make Russia pay for its temerity. The US and its EU vassals imposed sanctions against Russia, essentially hurting Russian-European trade.

Then in July the MH17 was shot out of the sky. New rounds of indignant protest and howls of anger in the "West." Additional proof, so it was said, of Russian barbarity and disrespect for international law.

However, why on earth would the Russian government allow any further deterioration of the international climate? The only party standing to benefit from it was the US itself.

With mounting anxiety, it had been witnessing the growth of Russian-European trade. In 2012 the first part of Gazprom's Nord Stream 2 pipeline delivering Russian natural gas to Germany had been inaugurated. The US was beginning to fear that soon all of Europe would be dependent on Russian gas: a true nightmare! Against this background, the only candidate for shooting down the MH17 jetliner is the US and its new Ukrainian vassal.

Not surprisingly, the "Join Investigative Team" (JIT) charged with building a case against the perpetrators, never bothered to find out the truth. All it did was to try and fit the evidence in such a way as to charge the "Pro-Russian Rebels" in the Eastern Ukraine and their "Russian sponsors." Any evidence that would point in the other direction was systematically ignored.

Finally it was felt a reasonable case had been built and charges were made against four individuals, to be handled by The Hague District Court. The judge presiding over the show trial, Hendrik Steenhuis, is a trusted operative in political trials. After a long career with the Dutch national tax service, and with close ties to Dutch military intelligence (MIVD), Steenhuis was parachuted into The Hague District Court in 2005. In 2013 he sentenced journalist Micha Kat to prison on trumped up and unsubstantiated charges, thus proving there is no freedom of speech in the Netherlands. In 2016 Steenhuis convicted member of parliament Geert Wilders for hate speech in another political show trial.

On the basis of the fabricated evidence before him, in line with the political directives from above, there is no doubt Judge Steenhuis will find all defendants in the MH17 case guilty. But then again, in the Netherlands truth does not matter, not even in a court of law. Certainly not if the truth is at odds with US imperial interests.