Trump to direct workers to die

"It is a truth universally acknowledged that Donald Trump is no George Washington, but his descent from commander-in-chief to vector-in-chief is nonetheless dizzying. Trump's narcissism, mendacity, bullying, and malignant incompetence were obvious before the coronavirus crisis and they have been magnified rather than moderated in his surreal response to a catastrophe whose full gravity he failed to accept until March 31, when it had become horribly undeniable."Fintan O'Toole, New York Review of Books 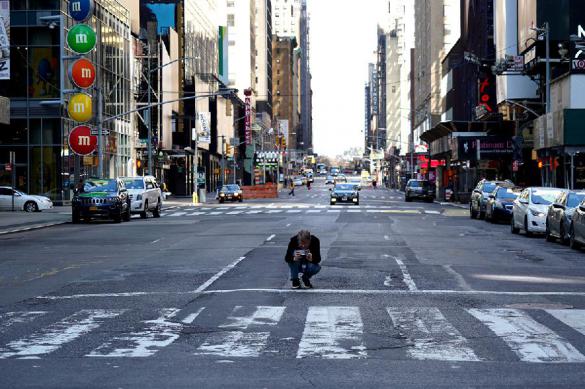 The US elite can't have the Joe and Julie Six Pack's of the world having time on their hands to figure out what their masters really think of them. It is frightful to the ruling elite that the plebes are agitating for on the job protections from virus infection via mild protests all around the USA. They must be sent back to work so they can't cause any more trouble. The taskmaster's thinking: Who cares if another 80,000 or so die from COVID-19? Get them going for the summer season. Give them some face masks, gloves and back to the production line. We got our trillions and we are fat and happy.

"From the standpoint of the ruling elite, generating public concern over the pandemic has exhausted its usefulness. The COVID-19 crisis has been exploited to engineer a massive, multi-trillion-dollar bailout of the financial system.

The financial oligarchy has received a bailout even bigger than after the 2008 crisis, but this time in the course of weeks, not years. This has led to the most explosive growth in the stock market in American history. The Dow Jones Industrial Average has soared 25 percent in less than three weeks.

Having looted the treasury, the imperative of the ruling class is to send workers back to the job of producing profits. The most open advocate of prematurely opening businesses is President Donald Trump, speaking on behalf of powerful sections of the financial oligarchy.

Trump declared Wednesday that it would be "nice to be able to open with a big bang, and I think we will do that soon. I would say we are ahead of schedule." In order for that to happen, Trump said, "I think we have to be on the downside of the slope."World Socialist Website

Wall Street wins coming and going.  For example,  who knew that millions of US employees have life insurance policies taken out for them by  corporations who, upon a worker's death, will collect the payout and use it for tax breaks, to pay health insurance and bolster pensions. It's a multi billion dollar business.

According to the New York Times, "...a common but little-known practice in corporate America: Companies are taking out life insurance policies on their employees, and collecting the benefits when they die."

You can't beat them or join them, it seems.

On Parole from the Master's Asylum

I had sent to a friend somepublicdomaindocuments on the US Department of Defense planning for a pandemic of the type the US, and much of the world, is currently dealing with. His response, paraphrasing, was that if he clicked on the links to the documents someone in the US government would discover what he had done and lock him up in an asylum.

My response to him was this: You don't understand! We were in the asylum that was daily existence before COVID-19 hit hard and lockdown orders from states and localities came. The rich and powerful, whom we only see on television; and who oversee the asylum, are scared shitless! Why? Now we can legitimately  sit back and think about how the daily rat race of the asylum really sucks. Parents have to be parents again and not rely on the babysitters in the brick and mortar education system. Families and neighbors are walking the sidewalks again talking to each other on weekends. There is time a-plenty for contemplation, hobbies, study, reading without extraordinary time pressures. And there is time to examine the criminality of Trump and the federal government's desultory response to the pandemic. The USA's status as banana-republic is now secure.

Oh sure, a shock to the system and the pain of job loss for those in the middle to lower classes. On top of that, auto workers, Amazon employees, grocery store clerks, delivery people, nurses and so many others have had tostrike and walk off the job simply to get an extra dollar in pay and some promise of paid leave.

Yet the US Federal Reserve and the US Congress are pumping trillions upon trillions into Wall Street and corporations. Great to prop up the stock but what about main street? $500 billion that comes with red tape, delays and near certainty that austerity programs are sure to follow and the Social Security Trust fund robbed again.

Trump Thwacks His Own People: Lost Shepard Leading the Doomed

If there is one article that you read dissecting Trump from end-to-end it must be Fintan O'Toole's piece in the New York Review of Books (link at the intro) titled Vector in Chief. It is compelling and on target.

In the piece, O'Toole points out that Trump's Al Qaida (his Base) is likely suffering more from COVID-19 than other political groups.

"For we must bear in mind that Trump's "real people," the ones who make up his electoral base, are disproportionately prone to the chronic illnesses (the "underlying conditions") that make Covid-19 more likely to prove fatal. A 2018 Massachusetts General Hospital study of more than three thousand counties in the US reported that:

For every marker of the prevalence of poor health (such as diabetes, obesity, days of illness, and mortality rates), there was a marked shift toward voting for Trump. Trump has acted in relation to Covid-19 like the God who tells the Jews to mark their homes with a sign so that the plagues he is inflicting on Egypt will pass by their doors-with the malign twist that he has instead marked out his own chosen people for special harm."

Who will be held accountable for the negligence that guided the initial US government response to the COVID-19 pandemic, a disaster that was planned for by the Department of Defense in conjunction with other federal agencies like the Center for Disease and Control and Prevention? One can only hope the sword is raised against the wicked shepard(s), the phony leaders of America.

"Woe to the worthless shepherd,

Who leaves the flock!

A sword shall be against his arm

And against his right eye;

His arm shall completely wither,

And his right eye shall be totally blinded."

John Stanton can be reached at jstantonarchangel@gmail.com