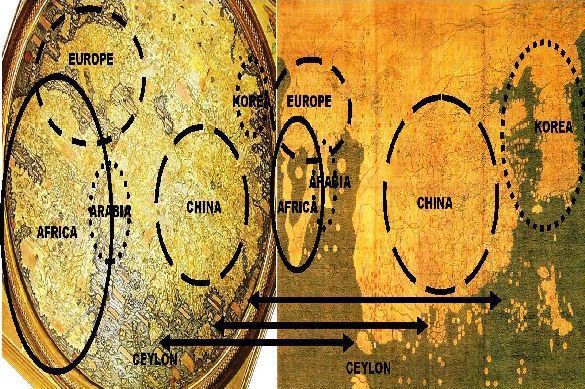 When Admiral Cheng Ho ordered the retreat of his naval fleet around the year 1424, he left, in the words of the anthropologist Abu-Lughod, "a huge power vacuum". The first great Chinese expansionist project, started during the Ming Dynasty, was prematurely interrupted there.

After impressive naval expeditions that reached territories as far away as the Indian Ocean and the coast of Africa, and in a decision not yet fully clarified by scholars of the subject, China would abruptly give up the first great expansionist project on a global scale.

It would take no more than 70 years for the Europeans to occupy the great void left by the Chinese and actually begin the adventure that gave rise to what we today call world system.

Six centuries later, China led by Xi Jinping finds itself in an unprecedented crisis in its recent successful history as the undisputed leader of the globalization process. The Covid-19 pandemic that abruptly hits the entire planet, for China in particular, was a hard blow that created an imbalance in its model of political and economic stability.

In the first three months of 2020, trade between China and the rest of the world fell by 6.4%, a figure unthinkable by Chinese standards. In particular, trade with the United States, the European Union and Japan declined 18.3%, 10.4% and 8.1% respectively.

Even with the strong decrease of contagion within Chinese territory, there is a great concern to accelerate the reopening of productive activities. The concern with increasing poverty and political destabilization are evident. In his recent visit to Shaanxi province, Xi Jinping made a point of underlining in his speech the importance of the fight against poverty.

In addition to incentives to businesses, investments in infrastructure and financial aid to the population, a series of structural reforms are planned to enable the country to overcome the terrible crisis triggered by Covid-19. An important annual session of the National People's Congress is scheduled for May 22nd, and more details can be examined there.

Meanwhile, Brazil, one of the countries that in the recent past could be considered one of the most important allies of the Eurasian integration project outside Eurasia, is experiencing the greatest political-economic crisis in its entire history and is sinking deeper and deeper into an unprecedented internal war.

Something that is being discussed internally among the Chinese establishment is precisely the creation of mechanisms to contain the risk of instability that the social tensions arising from economic difficulties could trigger.

Brazil had already been experiencing cascading crises that had accumulated year after year since June 2013, when the country was the target of a destabilization process - or hybrid war - that triggered a series of other more or less orchestrated events (such as the lawfare against specific targets) that culminated in the weakening of institutions that had been strengthened since the enactment of the 1988 Constitution.

To make matters worse, and in contrast to the Chinese stance in seeking to contain internal instability, the country is astonished at the erratic attitudes of President Bolsonaro, under the consenting silence of his military orbits.

Having been chosen to occupy the highest position in the Republic, in all probability during the fateful visit of the then American secretary of defense, James Mattis "Mad Dog", in August 2018 (two months before the presidential elections), when in a peculiar and closed meeting between the American and the High Command of the Armed Forces the password was given, and Bolsonaro was anointed to the mission to prevent the return of the left and realign Brazil to the satellite condition of the United States.

Everything leads us to believe that the crumbling of the Brazilian institutions has lit a warning signal within the Brazilian Armed Forces, which, in a mixture of sincere concern and sense of opportunity, took advantage of the power vacuum to move forward in the resumption of a protagonism that has been dormant for over 30 years.

Many forget, but the presence of the military - and especially the army - in the Brazilian political tradition dates back to the proclamation of the Republic in 1889, which opened the series of military coups that guided the entire Republican period to this day.

It is worth remembering that the occupation of strategic positions by the military became more visible when the current Minister of Defense, Fernando Azevedo e Silva, strangely, was appointed by the president of the Supreme Court, Dias Toffoli, to the position of special advisor.

Curiously, this has been happening in the month of September 2018 (between the visit of Secretary James Mattis and the election of Bolsonaro), where Dias Toffoli said he would have invited General Azevedo e Silva after requesting a nomination to the then commander of the army, General Eduardo Villas Bôas.

Threat to the Supreme Court

General Villas Bôas is the same man who, in April 2018, wrote on Twitter a veiled threat to the ministers of the Supreme Court if they found the habeas corpus request of former President Lula to be justified. The day after the constitutional remedy was judged, former President Lula would have his arrest ordered by then-judge Sergio Moro.

As a kind of Ayatollah, General Villas Bôas reproduces a classic character of Brazilian politics until the 1950s: the military chief.

At that time, personified by the figure of Brigadier Eduardo Gomes, the military chief was a kind of "guardian of morals and good customs" of the nation and justified the political action of the military as holders of an unwritten "moderating power". In this way, the military attributed themselves to the exercise of the "veto power" of the Republic. In the context of the Cold War, the power of veto was invoked to curb the communist threat.

The military element of the Executive

After more than 60 years, and when many thought that the Brazilian Armed Forces would be totally professionalized and away from politics, we find ourselves led by an Executive Power integrated by no less than 3 thousand military personnel; not to mention the eight ministries occupied by men in uniform.

As in a trench battle, the military had been advancing day after day in the control and tutelage of state organs and institutions of the Republic, but if there was a well articulated strategy of occupation of power, with the arrival of Covid-19 the pieces definitely shuffled.

Today Brazil is moving forward to become the world epicenter of Covid-19, and as the pandemic seems to get out of control, the more the military tries to control the internal systemic chaos.

Moreover, if before Covid-19 there was some cohesion in the Brazilian establishment around the neoliberal reforms carried out by the Ministry of Economy, with the bursting of the health crisis, it is every day more evident the split between business sectors, the big media, the National Congress and the Judiciary, which are now frontally positioned in opposition to the government.

The recent meetings between the President of the Chamber of Deputies, Rodrigo Maia, and the President of the Supreme Court, Dias Toffoli, with the Minister "eminence parda" of the Palácio do Planalto, General Braga Netto, were a subtle attempt at intimidation and framing of two of the most important civil authorities of the Republic by the Bolsonaro government.

At the same time that the basements of the government's disinformation machine slanders adversaries and agitates the low ranks of the Armed Forces and the military police of the states (its faithful allies), the country sinks in what is certainly the greatest existential crisis in its history.

As if all this were not enough, the rest of the world coexists with the prospect of incurring a public debt only seen, according to the British magazine The Economist, "amid the rubble of 1945".

Beyond the health crisis itself, the economic consequences of the post-Pandemic will be devastating from the fiscal point of view, because the compulsory closure of industry, offices and various segments of the service sector will certainly bring about a fall in government revenues.

As many analysts have already noted, the world is experiencing the exact moment of transition between what no longer exists and what is yet to be born.

Even before the pandemic, the acceleration of interstate competition is noticeable, which denotes the phenomenon of deconcentration of power that throughout the history of the world system always occurs in periods of decline in the long cycles of international politics.

Something that the Brazilian elites, especially the military elites - psychologically trapped in imaginary enemies such as Chinese communists and "cultural Marxists" - have not yet realized, is the dimension of Brazil's importance in the geopolitical context of this new century that is beginning.

With the shattering of Bretton Woods institutions and the liberal order hegemonized by the United States, the world draws - and we are all characters - a systemic configuration that has not yet been defined. In process.

As it had happened between about 1550 and 1640, when the world, still dominated by the powerful Spain, saw the movements of contestation to the empire that had built its power in the newly discovered America flourish.

Trapped by the wealth of gold and the medieval system of government that no longer corresponded to reality, the Habsburgs - in their alliance with the papacy - fought so that their hegemony would not disintegrate amid the rise of the newest actors in the system, namely, France, Holland, Sweden and England.

At that time, Europe was swallowed up by an unprecedented escalation of wars stemming from those new realities of power whose new actors, emerging in the northwest of the old continent, were unwilling to submit to Spanish power.

The translation of that scenario was the deepening of the systemic chaos that would be pacified only with the advent of the Treaty of Westphalia. Any resemblance to the present world moment is no mere coincidence, at least for geopolitical scholars.

Going back to the year 2020, it is very likely that some aspects will prove to be clearer and bolder in the post-Pandemic. Technological competition, more visible around 5G, tends to radicalize in many other areas. And the search for natural/energy resources is already a reality and places not only Africa, but South America itself as the target of the new imperialist race that should also deepen.

For now, the Brazilian establishment is a mere spectator of the rapid changes that the world system will see in the coming years.

China, even though it has been severely hit by the Covid-19 meteor, is reinventing itself in its policy of global humanitarian aid to effectively combat the virus and is focusing its action on strengthening the Eurasian integration project; in particular the Belt and Road Initiative - BRI.

Demonstrating impressive resilience, despite the strong retraction in exports to central countries, the Chinese saw an increase of 3.2% with the New Silk Road countries. Although not comparable to previous years, it shows that BRI's infrastructure projects have not been so strongly affected by the adverse effects of the health crisis.

Nothing more appropriate to the thought and conduct of Confucian cosmology, based beyond mere rambling, in a concrete act, an action.

Thus, the Chinese follow their journey towards the central helm of the world system, consciously absorbing the pillars of Western modernity, but without ever losing the essence of Confucian thought, the Tao-to that always seeks effectiveness beyond mere thought.

Next June marks seven years of uninterrupted political-institutional instability in Latin America's largest country. May the history of the oldest peoples and the winds of change teach us to guide the helm of our own destiny.

Fabio Reis Vianna, lives in Rio de Janeiro, is a bachelor of laws ( LL.B), writer and geopolitical analyst. He is currently a columnist in international politics for the printed version of the centennial brazilian newspaper Monitor Mercantil.