Russia's state-of-the-art narrow-body passenger aircraft MC-21 took part in the flight program of the MAKS-2019 air show in the town of Zhukovsky near Moscow. The flight lasted for about five minutes, with presidents of Russia and Turkey, Vladimir Putin and Recep Tayyip Erdogan watching. Putin and Erdogan took part in the opening ceremony of the air show.

It was the first time, when the new airliner demonstrated its beauty in the sky to the eyes of the general public. MAKS-2019 will demonstrate three MC-21 aircraft, one of them with interior design. The first test flight of the aircraft was held in 2017; the serial production of the MC-21 is to begin in 2021.

Aeroflot will become the main operator of the new aircraft. The airline has already signed a contract for the supply of 50 of these aircraft with another contract for 35 more aircraft under development.

Russia has been working on the MC-21 for more than ten years. Only one version of this mid-range narrow-body airliner is being developed - the MC-21-300 with a capacity of 211 seats in the two-class layout. The Irkut Corporation created the aircraft in cooperation with many foreign companies. In 2018, the company faced difficulties with the deliveries of composite materials because of sanctions. Large elongated composite wings reduce fuel consumption, thereby increasing the economic efficiency of the aircraft.

The USA imposed sanctions on JSC Aerocomposite (part of the United Aircraft Corporation, UAC) and some other companies related to the same industry profile in the fall of 2018. Foreign suppliers (Hexcel (USA) and Toray Industries (Japan)) thus stopped selling composite raw materials to two Russian companies. As a result, Irkut Corporation had to localize the production of components and systems of the aircraft. The level of localization is expected to reach 97% by 2020, and the aircraft will not depend on foreign supplies. The total cost of the project until 2025 is estimated at 437 billion rubles. On July 22, 2019, the head of Rostec, Sergei Chemezov, asked President Vladimir Putin for another 300 billion rubles for the financial recovery of all UAC companies to implement the MC-21 project and other programs of the Russian aviation industry.

The Sukhoi SuperJet 100, Airbus A350 900 and Embraer E195 are also to be demonstrated as part of the flight program of the MAKS-2019 air show. As for military aviation, one will be able to see  the fifth-generation fighter Su-57, the latest MiG-35 of 4 ++ generation, modern combat aircraft Su-35S, Su-34, the Be-200 amphibious aircraft. For the first time, naval aviation pilots of the Russian Aerospace Forces will present the program "Air combat with elements of super-maneuverability." The pilots will fly two Su-30SM fighters for the program.

MAKS-2019 will also showcase the model of the Russian-Chinese wide-body long-range CR929 aircraft. Visitors will be able to see the cockpit, as well as elements of the first, business and economy class cabins.

Foreign aircraft manufacturers will demonstrate in Russia the short-haul airliner Embraer E-195E2 in the Tech Lion livery, the Pilatus PC-24 business jet, and the light-engine Piper M500 aircraft. The Airbus A350-900, which was previously demonstrated at MAKS air shows, will be presented this year with new Airbus Connected Experience solutions. The solutions are designed to raise the level of passenger comfort and improve their interaction with the crew.

The fifth-generation Russian fighter aircraft Sukhoi Su-57 will be presented for the first time both in the static and in the flight program. The Ilyushin Il-112VE light military transport aircraft will be another new model of military aircraft.

The convertible Il-78M-90A air tanker, more than 160 modern models of military equipment and latest high-precision aviation weapons will be shown at MAKS-2019 as well.

The range of products manufactured by Russian Helicopters will be widely represented too. Visitors will be able to take a look at the world's heaviest Mi-26T2V helicopter, the Mi-38T transport assault helicopter, Mi-171A2 and Mi-17V-5 medium-sized helicopters, Mi-24P and Mi-35M transport-combat helicopters, combat reconnaissance and Ka-52 Alligator assault chopper, light helicopters Ansat and Ka-226T. Ka-52K and the export version of the "Night Hunter" - Mi-28NE will be on display on the ground.

Russia's Almaz-Antey aerospace defense company will showcase full-scale models of vehicles of the Tor anti-aircraft missile system and a new system for countering unmanned aerial vehicles. The company will also show the S-400 Triumph and Antei-2500 long-range systems, the Viking and Vityaz medium-range systems, and other products. 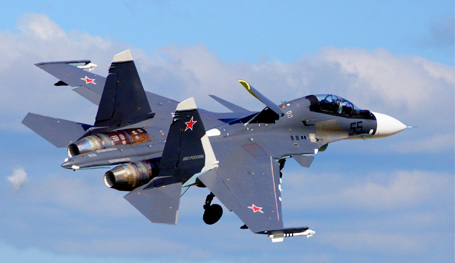