On January 15, 2020, Russian President Vladimir Putin delivered his 16th Address to the Federal Assembly. During this annual speech, the head of state traditionally sets out his assessment of the state of affairs in the country and his vision of main objectives for the future. This year, Putin's speech was broadcast live almost everywhere - on the facades of buildings, in public transport, at clinics, hospitals, airports, libraries, on Mount Elbrus and even on board the International Space Station. 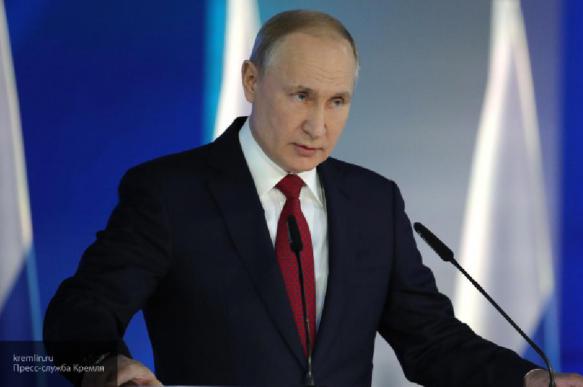 Economists, experts and many public figures believe there will be no "revolutionary" or "breakthrough" suggestions, because they are simply no such suggestions per se.

Putin started his speech with saying that there is a demand for a change in the Russian society. The pace of change should increase every year, he said, with the active participation of Russian citizens in them. At the same time, he noted, it is extremely important how many people there are in the country. Thus, the problem of demography was the first one that Vladimir Putin spoke about in this speech.

The fate of Russia and its historical prospects depend on demography in the first place, the president said, added that the country needs to escape from the demographic trap and ensure the country's population growth.

Putin noted that it is the generation of the 1990s that builds families today. Russia experienced a significant demographic crisis during the 1990s, which has created a complicated demographic period today.

As Putin said, the point of all measures that he proposes is to create an extensive family support system.The president emphasized that the measures in the field of demographic development that the Russian authorities had taken before have already brought positive results, and there is a large new generation growing in Russia. "They are the boys and girls who go to kindergartens and study at schools now," the president said. "It is very important that they take true family values close to their hearts: that family means love, happiness, the joy of motherhood and fatherhood, that family means strong connection of several generations, where respect for elderly people and care for children always unite, that family gives a feeling of confidence, security and reliability," Putin said.

If all this becomes a natural moral norm for the younger generation, then the authorities would be able to solve the historical objective to guarantee the development of Russia as a large and successful country.

About 70-80% of low-income families in Russia are families with children. "Very often, even when both parents work, the income of such a family is very modest," Putin said.

If incomes are low, families should receive additional payments for their first and second children, the president said and suggested implementing monthly payments for each child from three to seven years old already from January 2020. Families whose income does not exceed one subsistence rate per person will be eligible to such payments.

"When the child turns three years old, the family stops receiving payments and may find itself in a difficult situation. This is what happens most of the time, and we should not make this happen. In this regard, I propose to provide monthly payments for children aged from 3 to 7 years inclusive, starting from January 1, 2020," Putin said.

"At this age, children "get acquainted" with viruses, they often get sick and do not go to school. So, it is often difficult for mothers to combine work and child care," he added.

Initially, such payments will amount to a half of the cost of living - 5,500 rubles, and in 2021 they will be increased twice to the average amount of 11,000 rubles per month.

The program of the maternity capital in Russia will be extended before 2026, while the capital will be increased.

With the birth of a second child, the maternal capital will be increased by another 150,000 rubles, and then it will be indexed every year.

Putin proposed that all school children studying in grades from 1 to 4 should have free hot meals at their schools.

"I propose providing free hot meals to all elementary school pupils studying in grades from 1 through 4," the president said.

Putin also pointed out the importance of the role of the class master. The class master is also a mentor. This is a federal function, the president noted, adding that class masters in Russia would receive additional payments while maintaining existing payments. They should not be reduced, because it goes about the specialists who are vital for the country, Putin said.

Starting from September 1, 2020, class masters in Russia will receive a special additional payment of no less than 5,000 rubles.

Putin refuses to change the Constitution

The potential of the 1993 Constitution has not been exhausted and there is no need to change it, the President of the Russian Federation said.

However, some changes are necessary, the president believes. Vladimir Putin proposed a minimum of 7 amendments to the Constitution of the Russian Federation.

Russia will defend the truth about Victory over fascism

In his Address to the Federal Assembly, the Russian president announced the need to defend the historical truth about Victory over fascism.

"This year we are celebrating the 75th anniversary of Victory in the Great Patriotic War. For Russia, May 9 is the greatest and the holiest of holidays, we are proud of the generation of victors, we honor their feat, and our memory is not only a tribute to the heroic past, it serves our future, it inspires us and strengthens our unity. We must protect the truth about Victory, otherwise what we are going to say to our children if lies spread all over the world like an infection?" said Vladimir Putin.

To protect the "truth about Victory," a complex of archival documents on the history of WWII will be created in Russia. These documents will be available to the whole world.

"Russia will create the largest and most comprehensive complex of archival documents, cinematic  and photographic materials related to WWII, and they will be available to both our citizens and to the whole world," Putin said. The creation of such an archive is "our duty of a victorious nation, it is our responsibility to future generation," he added.

Speaking about the social policy further, the president proposed to increase the number of state-funded places at universities annually. Priority should be given to regional educational institutions.

"In the coming years, the number of school graduates will increase. It is important to maintain equal, fair access to free full-time higher education. In this regard, I propose to increase the number of state-funded places at universities annually and give such places to regional universities in the first place," Putin said.

The President of Russia also said that problems with interrupted supplies of vital medicines in Russia should not be repeated in the future.

"Last year, a number of regions experienced interruptions in the supplies of medicines. Procurement was actually thwarted, and some officials spoke about the problem as if it was a matter of purchasing office supplies," Putin said. "People were left without extremely important, sometimes vitally necessary medicines. I draw attention to the fact that such situations should never happen again," the president added.

Russian President Vladimir Putin wants to see a breakthrough in Russian science, in the field of artificial intelligence and in other high-tech fields, in particular, in genetics, digital and energy technologies.

"The speed of technological changes in the world has been accelerating, and we must create our own technologies and standards in those areas that determine the future. It primarily goes about artificial intelligence, genetics, new materials, energy sources, digital technologies. I am convinced that we can achieve a breakthrough here, just like in the defense sector," the head of state said during his Address to the Federal Assembly.

In addition, Putin added, our should create conditions to attract young specialists to science. "A chance to work with unique equipment, to take on most ambitious tasks is an incentive for young people to go to science. This is already happening; it is estimated that by the middle of the decade, every second scientist in Russia will be younger than 40 years old," the Russian president said.

At a time when world events, in particular, in the Middle East, are developing unpredictably and uncontrollably, when regional conflicts are rapidly evolving into global threats, one should take real action towards peace, the Russian president said.

"The UN founding countries should set an example. It is the five nuclear powers that bear special responsibility for the preservation and sustainable development of mankind. It is five nations that must be first to take measures to eliminate prerequisites for a global war, develop new approaches to ensuring stability on the planet, which would fully take into account political, economic and military aspects of modern international relations," Putin said.

According to Putin, Russia is no threat to anyone, nor does it impose her will on anyone else, but "our decisions to strengthen national security have been made in a timely and sufficient manner."

"For the first time in the history of nuclear missile weapons, including the Soviet period, and the newest time, we are not catching up with anyone, but on the contrary, it is other leading states of the world that have to create the weapons that Russia already has. The country's defense has been ensured for decades to come, although we can't rest on laurels and relax here - we need to go forward, carefully observing and analyzing what is happening in this area in the world, to develop combat systems and arms systems of future generations, "Putin said.

He noted that the security that Russia's state-of-the-art weapons provide, in turn, "creates the basis for the progressive, peaceful development of Russia, allows to do a lot more to solve most pressing domestic issues and focus on the economic and social growth of all our regions in the interests of the people."