The Documented Ancient Construction Method of The Great Pyramid

The Documented Ancient Construction Method of The Great Pyramid 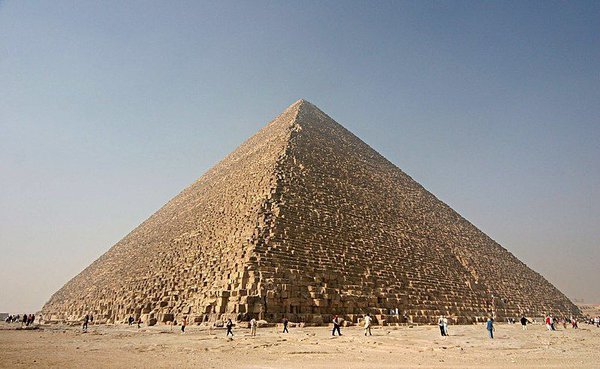 The earliest historical documentation of Great Pyramid construction at Giza can be found in the Old Testament of the Holy Bible, in the Book of Ezekiel, Chapter One.

There were no ramps for raising Pyramid blocks on the Giza Plateau.

The four sided Pyramids at Giza have four innate stepped sides which can be regarded as "stone racks", and multiple ancient Egyptian wooden pinion-pulleys engaged with these stone racks to raise the Pyramid, progressively utilising a Pyramid under construction to the point of completion. The ancient method is elegant and the absolute opposite of what Hollywood has us believe. This is the earliest known example of Rack and Pinion Mechanics, wooden pulley machines, each having a mechanical advantage of 2.8 (MA = 2.8)

The earliest historical documentation of Great Pyramid construction at Giza can be found in the Old Testament of the Holy Bible, in the Book of Ezekiel, Chapter One.

Two thousand years after construction Ezekiel, a Hebrew priest-scribe-historian convened a gathering of Hebrew exiles to glean what had been spoken of and remembered throughout their generations.

What they told him on that particular stated day beside the River Chebar in Babylon, he wrote down, he documented.

By modern standards of technical writing, Ezekiel's transcribed reportage reads as florid mumbo jumbo. The time frame and North East African cultural psychology of describing actions through the innate characteristics of animals, in this case the Eagle, Lion, Ox and Man had to be considered over many weeks before being revealed and making perfect sense as attributes pertaining to location properties at any particular point during pulley hoisting operations.

Examples of innate animal characteristic language are, "soared like an eagle" and "strong as an ox".

When a Pyramid construction worker exclaimed "the ox has broken", the engineers knew the pulley lobe location was directly under and bearing the load of a Pyramid block, because the ox is the beast of burden and carries the load.

Only after my thorough understanding of the later historical documentation of Herodotus did Ezekiel's reportage make perfect sense and there is convergence of the construction method between these two documents. Such convergence of at least two documents by separate authors is usually considered proof of an event by most universities worldwide.

The second document is written by Herodotus, a Greek historian widely regarded as being "The Father of History". Herodotus asked many questions in his travels and recorded what he was told. In c.450 BC the Giza priesthood personally told Herodotus what they knew of Giza Pyramid construction.

I have confirmed what the Egyptian priest-scribe-historians explained to Herodotus to be absolutely correct and basically this is, Giza Pyramids were built using wooden pulley machines. Tomb models exist of these pulleys, known as "Petrie rockers". In museums these are labelled as "of unknown use".

Western World universities and mass-media are silenced, so hope the Eastern World can behold and investigate this epic revelation, all documented 2500 years ago, why wait longer? Could it be that fake history and fake news reporting rule over our modern world?
My thanks to Timothy Bancroft-Hinchey and Pravda for providing a democratic non-fake news platform.