Two weeks ago, in the Kasturba Ghandi Hospital in the city of Chennai, a baby with one eye was born. Doctors believe that the baby has a good chance of living on. A similar case also occurred in Russia. Typically, the nose and nostrils are missing, adding to the disfigurement. Only one in one million babies are born with this defect, as it is detected early in pregnancy and is almost always aborted. Not this time, however.

The parents elected to keep the child, whom is expected to survive, citing the otherwise excellent condition of her internal organs. The real concern is when the baby grows up, and will face constant and likely unpleasant discrimination, shortnews.com reports.

The cause of the girl's deformity is still undetermined. But the hospital report's listing of Cyclopamine offers a tragic reminder of concerns over the state of Indian medical regulations, including lax oversight of fertility clinics and low barriers of entry for human drug trials, wired.com says.

Only six months ago in St Petersburg, a girl-Cyclops came into the world. On examining the seven month old fetus, doctors were shocked to find that the girl had thick curls of hair on her back and shoulders as well as her head. On her forehead was a large blue eye and just above it, a form of proboscis, through which, as it turned out, breathing took place. The baby died almost immediately after birth, ufolog.ru reports.

On Wednesday, March 25, Russian President Vladimir Putin made a televised address to the nation in connection with the situation with the spread of the coronavirus infection in the country 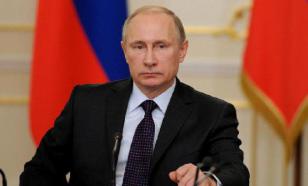 Europe
Why so many Covid-19 deaths in Italy?
Real life stories
Second wave of coronavirus pandemic is coming despite quarantine
News from the Kremlin
Russia grounds all airplanes, Moscow takes unprecedented measures