Epiphany: Russians swim in ice-cold water to purify themselves

On the night of January 18/19, Orthodox Christians celebrate Epiphany, one of the most important religious holidays. Many people traditionally brave ice-cold water this night in a hope to wash away their sins. This is quite a worrisome night for doctors and rescuers as they have to stay on duty near water reservoirs, where the ritual takes place. 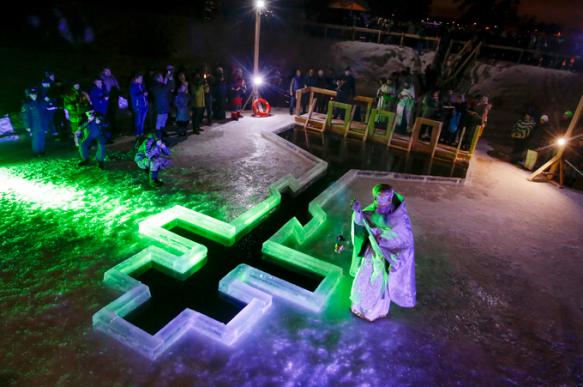 Almost 2,000 years ago, Jesus Christ entered the water of the Jordan River to be baptized by John the Baptist. Since that time, it is generally believed that all water on Earth turns holy on Epiphany night every year.

Russia embraced Christianity in 988. It became a tradition in Russia to cut holes in the ice of lakes and rivers, often in the shape of the cross, and to bathe in the freezing water. The believers dip themselves under the water three times for the ritual.

A theory says that when a human being jumps into ice-cold water, they improve their immunity. Medics do not share this point of view. Immunologists say that such a strong physiological stress undermines the immune system and triggers the developments of various infections that were previously subdued.

What happens to the body when a person jumps into an ice hole?

If he or she is absolutely healthy and vigorous, the Epiphany night will be something like an examination for them to test their state of health. Such a person will indeed feel rejuvenated and invigorated.

However, if a participant of the ritual is weak and unprepared for such a stressful situation, if he or she has a whole bouquet of chronic disease, such people put themselves at serious risk.

Andrei Shulzhenko, a Doctor of Medical Sciences, an immunologist:

"As a rule, after the Epiphany night many people are hospitalized with serious forms of pneumonia and other chronic diseases that they may have. The rate of heart attacks skyrockets during these days, many infarctions occur," the doctor said.

When an unprepared person jumps into the freezing water, their body is exposed to a serious stress. Blood vessels all over the body, especially in the head, get constricted immediately. Such a stress may even lead to a lethal outcome because the heart may not cope with such a test.

If you decide to participate in the ritual, medics recommend to take preparations in advance:

- take contrast showers regularly;
- pour cold water over yourself every day, twice a day;
- make physical exercises on a regular basis;
- spend as much time as possible outside.

On Epiphany night, before jumping into the water, warm yourself up with the help of physical exercises, not alcohol. When you feel hot, this is the moment when you can undress and jump into the water.

Dip yourself into the water three times and get out of the water quickly. Do not try to demonstrate your resistance to cold to anyone, never compete with anyone in the water. As soon as you get out, rub yourself all over with a dry towel, get dressed and go to a warm place. If you do not have heart problems, you can have 50 grams of cognac - not more than that and only after the ritual.

Bathing in ice cold water is strictly forbidden for those who have: