How "Putin's army in miniskirts" is created 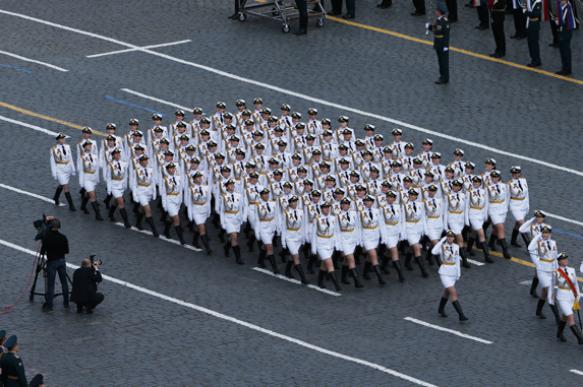 Military women were invited for the first time to take part in the parade. Surely we had marching drills, as one should measure out one's pace. After all, Red Square paved with setts is not as flat as a parade ground. So, the best ones, most beautiful and clever were selected. In fact, everything comes easily to girls, because they have more diligence and zealousness than guys. I don't want to offend anybody, but we were training less time than them, as they had been aware of their participation prior to us. And when we arrived in Alabino for the first time, everyone claimed we were marching up to par. I wouldn't say that better, of course not, but it's up to par. So, girls did their best, they wanted to make a good showing and not to disgrace themselves at the same time. Well done!

It can be noticed that some guys didn't feel well either, given such exercise stress, so it was a bit hard for girls too, but not always.

A wave of emotions that overwhelm you while being on Red Square is absolutely unspeakable. Because first of all we didn't want to disgrace our authorities, that entrusted us with such an honour, and of course we wanted to show our respected veterans that we are proud of what they did for us. If it were not for them, the sun would not shine to such extent, and we wouldn't live so freely and beautifully. So, it's an ounce of tribute we could pay to our veterans, who saved the world.

Surely I'd like to congratulate everyone on the Great War, it is indeed Great, it was hard, but so long-awaited, and necessary not only for us, but the whole of Europe.

It's a pity that today some try to remake this history. So, we should maintain it and I make a low bow to our veterans and express my gratitude for what they did. Let them live long and happily and let our children and maybe my grandchildren one day see these outstanding people. Because when my son speaks with veterans of the WWII, he has tears in his eyes, as one cannot sit back indifferently after these stories.