French special forces stopped a bus with Russian fans, that headed to Lille, where Russia-Slovakia match is to be held on 15 June. The Russians refused to leave the bus, and demanded an interpreter and explanations. The French authorities explain their acts towards Russians with necessity to 'check documents, identify personalities and then hand this data to local investigative bodies'. Aleksandr Shprygin, President of the Pan-Russian Union of Fans, said about real course of events on the spot.
Aleksandr Shprygin, President of the Pan-Russian Union of Fans:
'We are sitting in a bus now and are waiting for a consul. The French police has 29 deportation orders for me as well, absolutely illegal. We haven't been involved in disorders, and we don't know why it is happening. They said we would be able to appeal later. It is very hot in the bus, they don't let us switch the air conditioner on, there is no water. They don't let us go to the toilet. One adult fan felt sick, we are looking forward to what it will end up with. The tension a little bit decreased, but it's very unpleasant to sit in a blocked bus when it's +30°C".
Now part of the Russian fans have been taken to the airport. 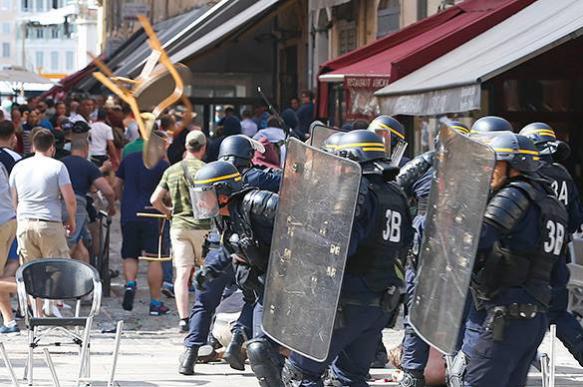