The US presidential candidate from the Democratic Party Hillary Clinton has to publish a report on her health after she fainted at the ceremony commemorating victims of the 9/11 terror act. As the US Fox News reported, Donald Trump, Clinton's adversary at the presidential elections from the Republican Party, had previously come forward with such an initiative. 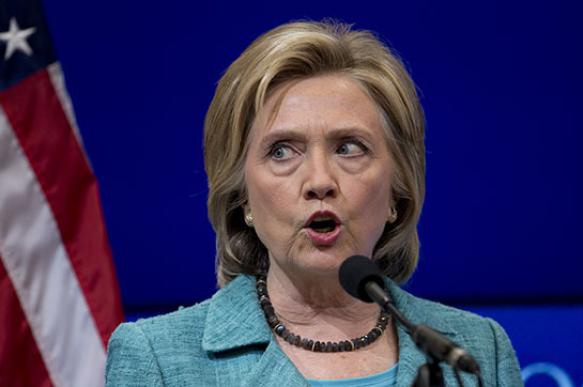 And the Washington Post demands Clinton to leave the presidential race. According to journalists, in case she becomes a president, she will be in her 70s at the mid-term. Clinton's physician diagnosed pneumonia. Thus, given the disease she was prescribed with antibiotics and advised to rest, while at the event, she became overheated and dehydrated.

As Pravda.Ru reported, Clinton had to leave the event prematurely as she was feeling sick, and almost fell while coming to her van. It can be seen at the video that her legs gave way beneath her. And it was alertness of the guard, that prevented her from falling. She was lifted into the van in arms.

The US has been concerned about Clinton's health for a long time. The voters are confused with her lengthy absence in a lavatory and uncontrolled coughing fits. The physical and psychological changes are evident. Uncontrolled indecent laughing often follows Clinton during interviews. Sometimes it even seems that Clinton doesn't realize what she says. It may be a consequence of a serious traumatic brain injury. In 2012 she had a concussion. These are supposed to be a psychomotor epilepsy and early symptoms of subcortical vascular dementia.

A black man with a syringe for immediate injections is though constantly noticed by the Democrats' candidate, and is always ready to come to assistance.

Americas
'Trump's One Saving Grace is That He Makes People Laugh': Kuznick
Politics
Former governor sues Putin for dismissing him due to loss of trust