The Pentagon has started deploying heavy weapons in Europe, as part of the NATO's operation Atlantic Resolve aimed to 'reassure allies under Russia's aggression'. According to the Il Giornale, it's the biggest military reinforcement at the Russian borders since the Cold War. The sites are situated in Belgium, Germany and the Netherlands. 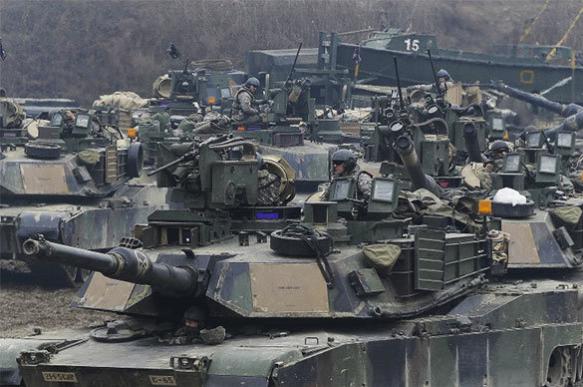 Deployment of 1,600 units of heavy weapons in the Eygelshoven's complex, which comprises 9 stores with air and humidity control within the area of 500,000 square metres has been already started. Armoured vehicles include the M1 Abrams tanks, Bradly infantry fighting vehicles and M109 Paladin self-propelled howitzers.

Deployment of military reserves in the strategic places throughout the world presupposes reduction of reaction time during possible emergency at the global level. Four storage facilities secure the US prompt access to 6,000 units of heavy weapons.

Full armoured brigade of 7 battalions will arrive in Poland in January 2017. Two battalions of mechanized infantry will be serviced in the Romanian and Bulgarian regions. Maintenance crew will be also deployed in the Polish city of Orzysz near the Russian Kaliningrad. In total, up to 6,000 American soldiers will come to Europe in the nearest 4 months.