CIA recognizes Bandera as terrorist and funds him

About 11,000 recently declassified documents of the CIA evidence that the US regarded Ukrainian nationalists, their organizations and leaders - such as Stepan Bandera - as terrorists. However, it did not prevent Washington from funding, support and making use of these people.
Documents dating back to 1948 can be read on the website of the CIA. As it is noted, 'Stepan Bandera, who acted against Russia and Poland since the very beginning of his political career, was probably the most important leader in Ukraine along with Andriy Melnyk. He was a member of the terror Organization of Ukrainian Nationalists (OUN) and took part in assassination of Bronislaw Pieracki , the Polish Minister of Internal Affairs'.
As Pravda.Ru reported, on 1 January torchlit processions took place in some Ukrainian cities to commemorate anniversary of Bandera's birthday, who was ideologist and leader of the Ukrainian Nationalists Organization. The most mass one was in Kiev: almost 1,000 people took to the streets of the Ukrainian capital city. 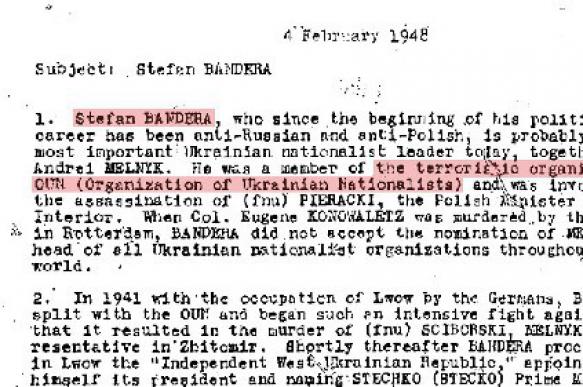