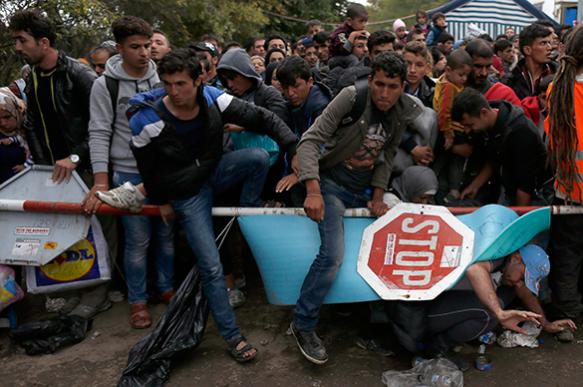 Georgia has reacted to proposal to move refugees from the EU to the country. The idea turned out to be a complete surprise for the country's authorities. Austria offered to settle the problem with refugees by resettling them in Georgia. Head of the Austrian Foreign Ministry Sebastian Kurz made a proposal to create centres on adoption of migrants beyond the EU borders. He added that it's not so important where exactly they will be situated. Kurz listed such countries as Egypt, Georgia and the Western Balkan states.

To cut the long story short - no matter where, the main thing is that not at ours. The Georgian Ambassador to Austria Konstantin Zaldastanishvili noted that the issue had not been discussed with Georgia, while Kurz visited the country just a month ago. The Diplomat promised to clarify the matter tomorrow morning after talking with the Austrian Foreign Ministry. The offer may also affect security of Russia, taking into account a common border with Georgia. As Aleksey Pushkov, former Chairman of the State Duma Committee on International Affairs, noted, 'It seems Head of the Austrian Foreign Ministry offered to send refugees from the EU to Georgia in exchange for a visa-free regime. Interestingly whether Georgia will be able to refuse the EU,' he wrote on his Twitter.

As Pravda.Ru reported, the visa-free regime will be in effect for the Georgian citizens since 28 March. It was claimed to be a historical moment and implementation of the country's mission - joining the EU.