The National Interest has published an article written by Doug Bandow, which is dedicated to a blamestorming session of the Senator John McCain. Having a reputation of a foreign-policy maven, he has never been interested in any other fields of human activity, the report says. As financial crisis began in 2008, McCain admitted he didn't know much about economics, and what about international relations - he has been looking for every reason to drag the country into a conflict. 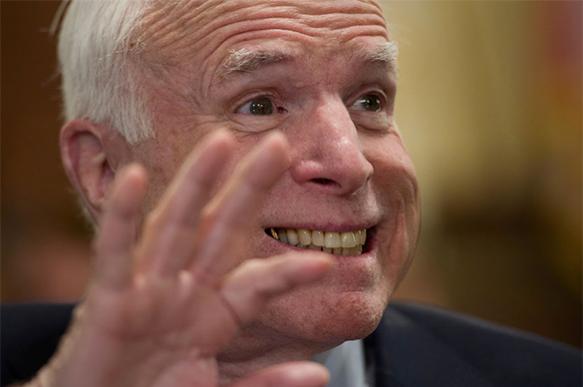 Had the US its relations deteriorated with either Serbia, Iraq, Afghanistan, Iran, Libya, Syria, North Korea or even Russia, the Senator provided a one-size-fits-all recipe - to escalate confrontation up to a military intrusion. 'Bomb, invade and occupy, and if that doesn't work, bomb, invade and occupy some more,' as Bandow describes strategy of McCain.

McCain can't stand criticism, those who do not agree with his opinion are almost traitors. It could be clearly evidenced when the issue of Montenegro's joining NATO was discussed in the Senate. As his party fellow Rand Paul stood against, angry McCain accused him of being a Putin's agent.

However, in case McCain really believes that 1,950 Montenegrin military men will help the US save the world from invasion of an imaginary 'Russian horde', he should live in a parallel universe, the author is sure.