Russian PAK FA vs US Raptor

Observer of the National Interest magazine Sebastien Roblin has compared the Russian T-50 fifth-generation fighter aircraft with the US F-22 Raptor. He believes the T-50 outstrips the US adversary. However, the oversea competitor can shake up the Russian Aerospace Forces.
The Russian aircraft will be equipped with a turbojet engine with a guided thrust vector, while thrust vectoring moments will be produced about three rotational axes.
The US colleague cannot boast about such characteristics: vector of jet stream may be changed only vertically.
Guided R-73 short-range missiles, the T-50 is equipped with, will be a surprise for the F-22. The Raptor will obtain such weapons only in 2017, while the guidance system, similar to the Russian one, will be created only in 2020.
The R-77 medium-range missiles, the T-50 is equipped with, also outstrip the US samples. But internal bays of the Russian aircraft may carry less weapons of such class.
The T-50 has a modern Infra-Red Search and Track (IRST) system, while the Raptor will get alike system only in 3 years.
A serious default of the T-50, according to the author, is a high-gain scattering cross section, that is the T-50 is more 'noticeable'. The author also believes that engine emissions of the Russian fighter make it more vulnerable to Infra-Red guided missiles.
'The Raptor is the only super-maneuverable aircraft of the US Air Forces, however it does not beat the PAK FA,' the author is sure. 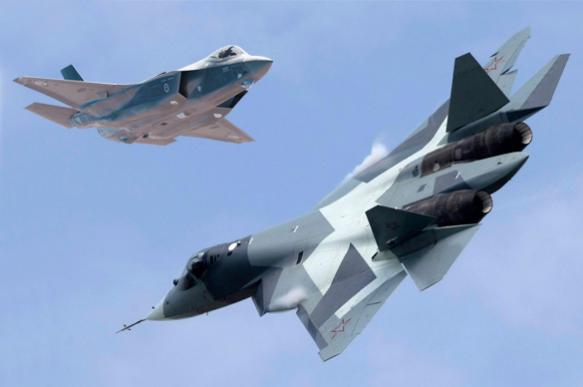