US to purchase chainsaws for Ukrainian police

The US State Department will purchase equipment for the Ukrainian police. Now law-enforcement officers will be able to operate with chainsaws, hydraulic tongs, scissors, and special rams able to unclamp more than 10 tons. A corresponding tender has been already placed on the US site of Federal Business Opportunities. 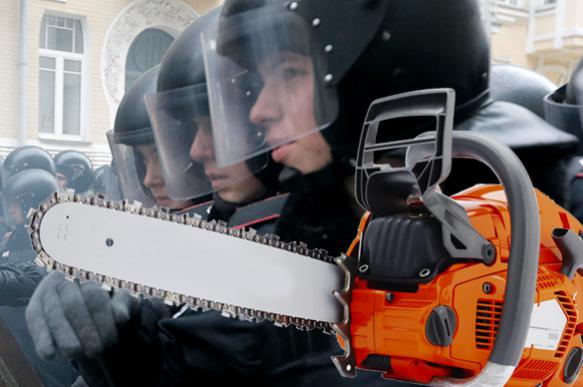 It is reported that in such way the State Department intends to reinforce functional power of the Ukrainian police. Equipment is allegedly needed for 'operations with high level of risk'.

As Pravda.Ru reported, Donald Trump decided to cut funding for the State Department four times. The case was about 'soft influence' on oversea countries. That made up about 30 billion dollars annually.

However, in mid-February the Pentagon promised Ukraine to continue providing serious financial support for its armed forces. The case is about money for 'upgrading of home defence abilities and professionalism of the Ukrainian Armed Forces'. The promise should be kept, thus, the US government is preparing a program to support Ukraine. The US officials aim to improve business climate in the country, increase competitiveness of Ukrainian companies and develop new industrial branches.