The European Union is experiencing the most acute and profound crisis in its entire history. Britain is leaving the EU against the backdrop of serious problems in Greece, the refugee crisis, smouldering military conflicts in Ukraine and the Balkans, the deterioration of relations with neighbours, the crisis in relations between Russia and Turkey - all this, coupled with the unfavourable changes in US policy, undermines the unity of the European Union.

Before to the EU summit in Malta, chairman of the European Council Donald Tusk wrote about the ongoing crisis in the European Union. A few weeks later, EU leaders gathered for a new summit in Brussels. It appears that the new summit was supposed to give answers to questions that Donald Tusk had raised.

The main question - about the unity of the European Union - was proposed to be solved "negatively." The EU will refuse from the unified integration model in favour of the new concept -  "two-speed Europe." This concept existed after the so-called wave of expansion, when the then European Economic Community accepted Greece, Spain, Portugal - the countries, the economies of which were a lot weaker than economies of the founders of the project - Germany, France, the Benelux states.

Europe switched to "one-speed" integration after the European Economic Community was transformed into the European Union and the joint European currency - the euro - was introduced. The EU continued its expansion afterwards and accepted the countries of Eastern Europe in a hope to take the newcomers to "Old Europe's" standards.

Today, hardly anyone doubts that all of that was done within the framework of the German integration model. Europe was supposed to become joint economic and political space that would live, work and function according to the rules of Berlin.

The current crisis in Greece gives a clear picture of the real price for the German model of unity. The Greek economy has been practically destroyed, the population of Greece has been deprived of basic social benefits and guarantees, in a nutshell - of the future. Yet, it is not only the Greeks who have to pay the price for the failure. German experiments cost a lot to all other members of the European Union, especially to "newcomers," such as Bulgaria and Romania.

Great Britain's decision to leave the EU has struck a decisive blow on Berlin's cherished plans to build the "economic Reich." London has become an alternative centre for the organisation of European space. The UK will find support of the new US administration at this point. The Anglo-Saxons will also try to persuade other countries to follow their example - those, who no longer want to tolerate the German "ordnung."

EU leaders are forced to fight fiercely to keep something that can still be kept. During the recent mini-summit in French Versailles, the leaders of France, Germany, Spain and Italy developed an initiative to revisit to the "two-speed" model of the EU. This means that the strong will integrate as hard as they can, whereas the weak will be forced to trail behind, if they refuse to accept enhanced integration measures that envisage full submission to the leadership of Berlin and Paris.

No wonder, the plan caused rejection among the "weak." Poland, that has long been claiming for leadership among the countries of "new Europe," has expressed negative sentiments clearly. During the EU summit in Brussels, Polish Prime Minister Beata Szydło spoke clearly against the "two-speed Europe" and refused to sign the final communique of the summit.

In response, French President Francois Hollande threatened to cut European subsidies to Poland. Szydło went ballistic: "If someone says: you behave badly and you will not have the money, we can not accept such statements," she said.

This episode brings us back to many years ago, when French President Jacques Chirac made a scathing remark about Poland. When Warsaw supported the American plan to attack Iraq, Chirac said: "Poland missed an excellent opportunity to remain silent."

As we can see, the quality of relations between the "old" and the "new" Europe has changed little. Interestingly, Jean-Marie Le Pen, the founder of France's National Front was also opposed to the accession of Poland and other states of the former Soviet camp to the European Union. Le Pen resorted to the image of the "Polish plumber," who was always ready to leave his French colleagues without work. Today, the Polish plumber has evolved into a "proud Polish gentleman" who does not tolerate any instructions on how to behave.

The Polish "noble gentleman" has the company of another traditional character for Europe - the Turkish Janissary. EU's relations with Turkey have been extremely complex as well. Years ago, the EU promised to accept Turkey in the European family. Today, however, the EU internationally humiliates Turkish top officials by deporting them from the Netherlands. The Turks have accused the Europeans of fascism (without having a clear notion of the term), while the Europeans disperse Turkish rallies thus meddling into preparations for a referendum to change the constitution of Turkey.

At the same time, Europe can not but understand that the conflict with Turkey may exacerbate migration problems. Until recently, Ankara has been holding back the flow of refugees from the Middle East. Yet, hundreds of thousands of refugees may flow into the Balkans and then further.

Does Europe plan to ignite a new conflict in the Balkans to intimidate neighbours and force them to unite by accepting the terms of protection from the Franco-German core of the EU? After all, France is a nuclear power that has the strongest army on the continent. Germany is the strongest European economy. It is worthy of note that EU's second wave of expansion took place right after the war in the Balkans. 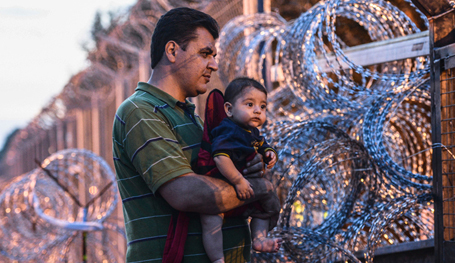