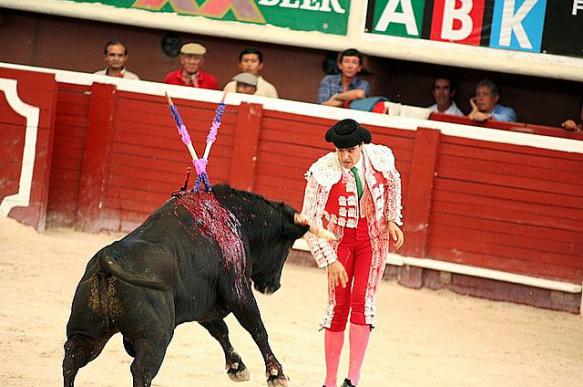 The wave of attacks by the great Iberian press against Russia has not subsided. In October it was the turn of the Catalan issue, when all the Spanish media expressly opposed to the secessionist referendum blamed Moscow for having invented a strategy of disinformation that had fuelled the separatist sentiment.

The wave of attacks by the great Iberian press against Russia has not subsided. In October it was the turn of the Catalan issue, when all the Spanish media expressly opposed to the secessionist referendum blamed Moscow for having invented a strategy of disinformation that had fuelled the separatist sentiment. From the pages of all the major newspapers rained down (and continue to rain) accusations about troll factories in Russian territory that, through Twitter and fake Facebook accounts, would direct the public opinion distorting the reality of the facts. An accusation then extended also to the Russian press agencies linked to the Kremlin (primarily Sputnik and Russia Today) blamed for having covered the weeks before the October 1st vote and the days at the turn of the referendum, showing the secessionist demands in a positive way and describing the behaviour of the central government of Madrid as authoritarian and violent.

A general russophobic sentiment that has also penetrated the Rajoy government itself, which although formally never accused the Russian government of having hatched a disinformation plan in favour of Catalan independence, has repeatedly made it clear that it has sufficient evidence to blame Russian agencies for acting in order to generate false and distorted information against the Spanish State. All this, according to the Spanish press and intelligence, with the aim of generating chaos within Spain, creating the conditions for a secession and therefore for a fracture of the European Union and the Western bloc. Thus, while in the other States of the Union the accusation addressed to Moscow is to stir populism of nationalist origin, in Spain, lacking a right-wing Euro-skeptic party, the Kremlin, according to this theory, would have found a picket in secessionism.

But now, the same Spanish press that had previously accused Russia of shaking the secessionist and antinational crowds, particularly El País

finds another accusation to be addressed to the Moscow agents: supporting the emergence of right-wing ultra-nationalist movements. In particular, El País' viewfinder focuses on two objectives: Geopolitica.ru and Katehon.com. "A Russian magnate near the Kremlin, Konstantin Malofeev, sponsors web portals in Spanish where the right theses of Russian and Spanish columnists are spread. This is the case of the websites Katehon.com and Geopolitica.ru" can be read in the on-line pages of the Spanish newspaper. "Katehon collects or disseminates texts by writers of the extreme right ideology. In recent months there have been texts of some young people interviewed as analysts for the Russian RT chain or for the Sputnik agency on a recurring basis" and then continue with: "Katehon exceeded 570 thousand visits in October (general data for the whole portal). Almost one on three visits comes from Russia, the United States or Spain. The Geopolitica.ru portal has exceeded 415 thousand visits in October, where they have quadrupled the results of July".

Unlike the alleged Russian interference in the referendum of Catalonia, this time the goal of the Russian strategy would not be to create a destabilizing front of the Spanish state structure, but to feed a circuit of on-line news favourable to the most conservative ideas proposed by think- tanks linked to these sites and, ultimately, favourable to the politics of Russia and Vladimir Putin. And all this would have, in general, the macro-objective of destabilizing the European Union through fundamental anti-European movements. If, therefore, with Catalonia, the European structure was put at risk through a secession (of a political nature opposed to that of the stories mentioned in this investigation), with the so-called "pro-Russian" sites, Moscow's action would be to create an ecosystem of on-line sites that create Euroskeptic ideas and feed fundamentally sovereign and opposing movements both to the EU and to NATO. Objective that in Spain is much more difficult than other European countries, given the absence of parties against or critical to the United Europe of Brussels, and that some may have as a landfall in the party Vox of Santiago Abascal.