On a Path Toward WW III 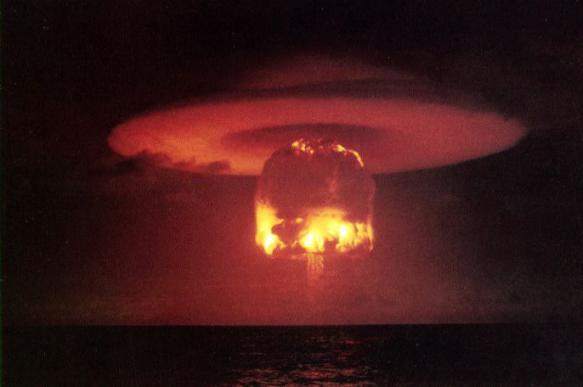 A war able to end all future wars may happen - because of the destructive power of today's super-weapons, making pre-nuclear age ones seem like toys by comparison.

The possibility of WW III is real - perhaps inevitable the way scary events are unfolding.

If launched, global war 3.0 most likely will be waged with nuclear weapons and other WMDs - a doomsday scenario, crossing a Rubicon of no return, humanity's survival up for grabs.

Bipartisan US hardliners dominating policymaking in Washington are hellbent on colonizing and controlling all countries worldwide - Russia and China the only ones able to challenge their imperial agenda, especially united.

The brave new world powerful interests in America envision will be more unsafe and unfit to live in than already. That's where thing are heading unless increasingly likely global war kills us all.

Unfolding events should scare everyone. Endless US wars rage, other planned to be waged - Russia, China, and Iran key nations Washington targets ahead, wanting them and all others transformed into US vassal states.

Bipartisan hardliners in Washington operate by their own rules, no others. The Trump regime's pullout of the JCPOA and INF Treaty were shots across the bow, indicating what's likely coming.

Russian Security Council official Alexander Venediktov warned about the US seeking to radically change the nuclear missile balance of power in its favor.

Vladimir Putin warned that if the Trump regime leaves the INF Treaty as expected, and deploys missiles able to carry nuclear warheads near its borders, Russia will develop new missiles to counter them, adding:

"(W)e...have sea and airborne (missiles), and there will be no difficulty to carry out research-and-development and make them land-based if needed."

"Washington publicly announced its plans to withdraw from the (INF) treaty in October. Through the high-level bilateral channels, it was confirmed to us that this decision was final and wasn't an attempt to initiate dialogue," adding:

"We'll be forced to come up with effective compensating measures. I'd like to warn against pushing the situation towards the eruption of new 'missile crises.' "

"Russia isn't threatening anybody, but has the necessary strength and means to counter any aggressor."

According to Tass, these weapons are "capable of flying at hypersonic speed in the dense layers of the atmosphere, maneuvering by its flight path and its altitude and breaching any anti-missile defense."

Last June, Putin said "the Avangard system is already in the process of its manufacture and has entered its serial production, and in 2019 we are planning to deliver it to the Armed Forces."

Trump officials "made hypothetical unfounded claims against us" - a pretext for likely greater US belligerence than already, the risk of military confrontation with Russia, China and Iran.

The US pullout "is one step towards an arms race," Putin warned. Trump regime policies got the Bureau of the Atomic Scientists to move its Doomsday Clock to less than a full minute to midnight.

It was an unprecedented action, signifying the risk of catastrophic nuclear war or ecocide over the Trump regime's threat to world peace and contempt for ecosanity.

Trump wants the US "release(d) from any obligations, any constraints, and not just regarding nuclear missiles."

His belligerent agenda risks the demise of all post-WW II agreements to prevent another global war.

"There will be no winner in a 'war of all against all' - particularly if it ends in a nuclear war. And that is a possibility that cannot be ruled out," Gorbachev ominously warned, adding:

"Faced with this dire threat to peace, we are not helpless. We must not resign. We must not surrender. Russia must "take a firm but balanced stand" with other nations worldwide - aiming for peace, wanting catastrophic nuclear war avoided.

The threat of its eruption is real, a doomsday scenario if waged with nuclear weapons. They'll be no safe havens anywhere. Nuclear war risks ending all life forms on earth.

If waged, it'll prove higher human intelligence is a curse, not a blessing.