Permanent US Occupation of Syria Planned 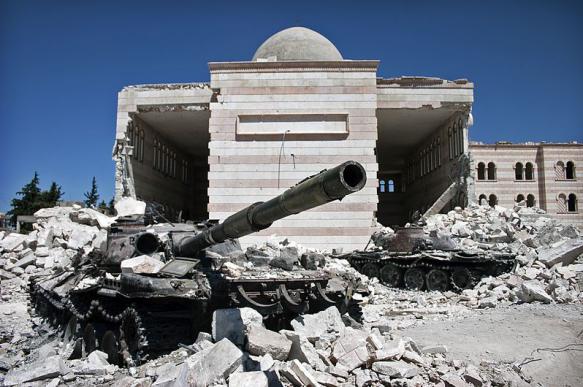 Resource control is a major US objective, along with dominating all other countries, eliminating challengers to its aim for global hegemony.

US special forces and/or other troops are deployed in three-fourths of nations worldwide - on the Pentagon's global empire of bases, used as launching pads for endless wars.

CIA operatives are everywhere, their objectives sinister. Who needs diplomacy when brute force works best, the way the US has operated post-WW II with rare exceptions to the rule, especially since Soviet Russia's December 1991 dissolution.

Globally deployed US forces came to stay, not leave, Syria no exception. Bolton, Pompeo, and the Pentagon effectively overruled Trump.

On Sunday, Bolton said there's no timeline for withdrawing US troops from Syria. They'll remain on the phony pretext of combatting the scourge of ISIS Washington created and supports - along with protecting Kurds in northern parts of the country the US doesn't give a hoot about.

They're used serve its interests, to be abandoned when no longer needed. On Monday, Iraqi deputy popular mobilization committee chairman Abu Mahdi al-Muhandis said "(t)he US claim of pullout from Syria to Iraq is an old trick," adding:

"The US security and military bodies are after running the crises in the region. As Kurdish forces have witnessed, the Americans can never be trusted in the region" - or anywhere else.

"The Syrian nation has fended off a major threat posed to the nation and the region by fighting against terrorism, and we will accompany Syria until final victory as we have been standing beside the Syrian nation so far."

Iran will also aid reconstruction in the country. Secretary of Iran's Supreme National Security Council (SNSC) Ali Shamkhani stressed that his country only has military advisors in Syria, not combat troops, legally involved at the behest of Damascus.

Washington and its allies are illegal occupiers - "invaders," Assad called them. Bolton said withdrawal of US forces from Syria is on hold, effectively saying  they'll stay, not leave.

On Monday, Pompeo was asked if there's a timeline for withdrawing US forces from Syria. "Nope," he responded, adding "(w)e don't talk about timelines."

He slammed Iran, turning truth on its head saying Obama "let Iran run loose," repeating the Big Lie, falsely claiming the Islamic Republic is "the world's largest state sponsor of terror" - a dubious distinction applying to the US, NATO and Israel.

He lied saying the US eliminated "99%" of ISIS in Syria, the scourge Washington supports. Thousands of its jihadists remain in Syria, the region, Afghanistan and elsewhere - deployed wherever the US wants them used as proxy troops.

Withdrawal of Pentagon forces from Syria is frozen. Weapons and munitions continue flowing into the country, including cross-border from Turkey, Iraq, Jordan and Israel.

Asked if US withdrawal began, Pompeo said "I'm not going to talk about that." What about other US personnel in the country? Pompeo declined to comment.

Saying the Trump regime is "trying to make sure that Israel and the Palestinians find a peaceful way forward" is polar opposite reality.

Trump's no-peace/peace plan remains on hold, dead before arrival for Palestinians. A so-called "coalition," consisting of 95% America, Britain and France most of the rest, continues using ISIS and other jihadists as imperial foot soldiers.

Pompeo maintained the myth about an Iranian aim to develop nuclear weapons it abhors and wants eliminated everywhere.

Israel is the region's only nuclear armed and dangerous nuclear state, along with America's presence.

According to AMN News, citing Turkish media, Erdogan intends asking the Trump regime to give Ankara control over the Pentagon's "22 military bases" in Syria if US forces withdraw.

Pulling out is increasingly unlikely. The US intends permanent occupation of Syria, Iraq, Afghanistan, and other countries, along with waging endless wars on humanity.

That's what imperialism is all about.