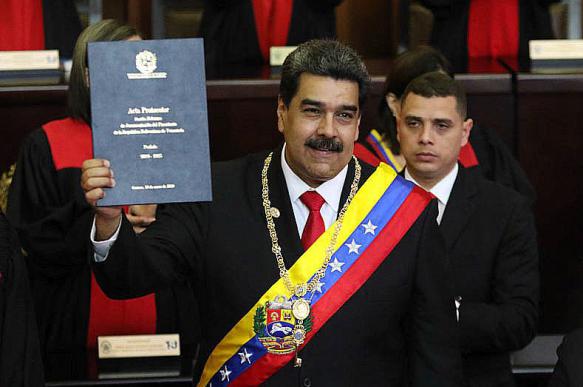 Michelle Bachelet serves as UN High Commissioner for Human Rights, chosen for the post in August 2018.

She succeeded Zeid Raad Al Hussein, a member of the Jordanian royal family - hostile to democracy in Venezuela and everywhere else.

He falsely accused President Maduro of "widespread and systematic use of excessive force and arbitrary detentions against demonstrators in Venezuela (sic)," along with "patterns of other human rights violations, including violent house raids, torture and ill-treatment of those detained in connection with the protests (sic)."

His remarks followed interviews with anti-Bolivarian extremists, wanting its government toppled. He irresponsibly blamed security forces for doing their job, using crowd control methods to quell violence, arresting and detaining street thugs - what all just societies do to protect their citizens.

He lied saying "responsibility for the human rights violations we are recording lies at the highest levels of government (sic)."

The US in cahoots with Venezuelan fascists turned streets into battlegrounds. Instead of blaming perpetrators, Hussein held defenders of law and order along with Maduro's government.

In June, 2018, his office issued a report titled "Human rights violations in the Bolivarian Republic of Venezuela: a downward spiral with no end in sight."

It falsely blamed Maduro for crimes committed against the state and its people, orchestrated by foreign dark forces, notably the CIA, National Endowment for Democracy mandated to combat it globally, and USAID.

The report falsely said "human rights violations (were) committed by State authorities...including the use of excessive force in non-protest related security operations, new instances of arbitrary detentions, torture and ill-treatment, as well as violations of the rights to the highest attainable standard of health and to adequate food," adding:

"The information gathered by OHCHR indicates that human rights violations committed during demonstrations form part of a wider pattern of repression against political dissidents and anyone perceived as opposed, or posing a threat, to the Government."

All of the above disinformation and more in the report are part of longstanding Western hostility toward Venezuelan social democracy, notably by Washington, wanting the country returned to US client state status.

This is the hardline UNCHR's position on Venezuela inherited by Michelle Bachelet last August. As Chilean president for eight years, she failed to fulfill promises made to shift the country away from being one of the hemisphere's most socially unequal - the legacy of Augusto Pinochet's 17-year dictatorship.

In March, she falsely accused Maduro's government of becoming "a worrying destabilizing factor in the region" - failing to lay blame where it belong, US regimes from the Clinton co-presidency to Trump responsible for human rights abuses in the country.

She lied about what she called the "continued criminalization of peaceful protest and dissent" in Venezuela - the hemisphere's most free and open society.

They took place "during illegal house raids carried out by the FAES, which subsequently reports the death as resulting from an armed confrontation..."

She lied expressing concern about (nonexistent) "restrictions on freedom of expression and of the press in Venezuela."

By invitation, she visited Venezuela last week, on Friday saying:

"We have reached an agreement with the Government for a small team of human rights officers to be based here, with the mandate to provide technical assistance and advice, as well as - importantly - to continue to monitor the human rights situation in Venezuela."

Why hasn't she dispatched a team to monitor major human rights abuses in the US, other Western nations, right-wing Latin American ones, Israel, Saudi Arabia, the UAE, Egypt, and other fascist dictatorships supported by the US - instead of focusing on democratic Venezuela.

Expressing concern about social, economic, and financial hardships in the country, she failed to lay blame where it belongs - giving short shrift to the Trump regime's all-out war by other means, saying:

"The causes of this immense economic crisis, which has been increasing dramatically from at least 2013, are manifold, and I have discussed with the State the need to tackle them as a matter of priority with the support of the UN agencies that have recently been able to strengthen their presence in Venezuela."

"I am concerned that the sanctions imposed this year by the US on oil exports and gold trading are exacerbating and aggravating the pre-existing economic crisis."

No "pre-existing economic crisis" existed. Venezuela's envoy to Russia Carlos Rafael Faria Tortosa earlier explained that "(a)s a result of the economic embargo imposed by the US from 2015 through the last year, financial damages to Venezuela's economy totaled $130 billion," adding:

"The government headed by President Nicolas Maduro is on the path of a very unequal conflict with the most forceful economic and military power in the world."

If stolen funds were returned to the country and US war by other means ended, normality would return to the republic - despite low oil prices.

Calling for Maduro to release anti-government protesters, she failed to explain they're imprisoned for street violence and other criminal actions - what no societies tolerate.

What Bachelet should have stressed, accusing the Trump regime for Venezuela's troubles, she largely blamed Maduro for, falsely holding him responsibility for what he has no control over.

The UN largely serves US-led Western interests, breaching its own Charter principles, blaming victims for crimes committed against them.