Trump intends turning this year’s Independence Day commemoration into a show of US military might — reflecting a nation permanently at war against invented enemies. More on the July 4 DC display below.

Was waging war then really worth it, taking perhaps 25,000 – 50,000 American lives, the “equivalent today to two and a half million (at the lower estimate) to get England off our backs?”

Canada ended British rule without war. So did Western Massachusetts farmers, “driv(ing their forces) out without firing a single shot,” adding:

“They had assembled by the thousands and thousands around courthouses and colonial offices and they had just taken over (and) said goodbye to the British officials” nonviolently.

America’s revolution was much different, but who “gained what?” Most Americans were poor like today.

“(T)he Founding Fathers were rather rich” with much different interests than ordinary people. “Do you think the Indians cared about independence” or Blacks held involuntarily as slaves?

“Slavery was there before (and) there after. Not only that, we wrote slavery into the Constitution. We legitimized it,” Zinn explained, adding:

“What about class divisions?” America was and remains a racist society. “We try to pretend in this country that we’re all one happy family. We’re not.”

The revolution wasn’t a “a simple affair of all of us against all of them,” any more than ongoing US wars in multiple theaters today.

“We’ve got to rethink this question of war,” said Zinn. There’s never a justifiable reason to battle another nation except in self-defense if attacked — clearly not the reason for all US post-WW II conflicts, aggression against nations threatening no one, a never-ending cycle of violence, slaughter and destruction.

Blacks were commodities, not people, women considered childbearing, homemaking appendages of their husbands, no constitutional rights afforded them.

Women’s suffrage wasn’t achieved until the 1920 19th Amendment became law after nearly a century of struggle for the right — 144 years after the nation’s birth.

Exploitation of Black Americans continues in new forms from earlier — from chattel to wage slavery, Jim Crow to its modern-day version, freedom to mass incarceration.

Zinn called enslavement of Blacks “the most cruel form in history: the frenzy for limitless profit that comes from capitalistic agriculture; the reduction of the slave to less than human status by the use of racial hatred, with that relentless clarity based on color, where white was master, black was slave.”

Native Americans perhaps have least to celebrate on the nation’s birthday, victims of America’s genocide, at most around 3% of their original numbers surviving.

For centuries, they were “hacked apart with axes and swords, burned alive and trampled under horses, hunted as game and fed to dogs, shot, beaten, stabbed, scalped for bounty, hanged on meathooks and thrown over the sides of ships at sea, worked to death as slave laborers, intentionally starved and frozen to death during a multitude of forced marches and internments, and, in an unknown number of instances, deliberately infected with epidemic diseases,” Ward Churchill explained, adding:

“The American holocaust was and remains unparalleled, in terms of its scope, ferocity and continuance over time,” thereafter suppressed by denial and silence.

From the nation’s founding to today, “We the People of the United States,” the constitution’s opening phrase, meant America’s privileged class, not its ordinary people, things no different today.

Yesteryear’s free-wheeling/self-serving politicians reflect how today’s political class operates for much greater stakes globally than when America was founded.

The experience left him “physically and emotionally haunted” — wounded, paralyzed, and wheelchair-bound.

He’s been arrested a dozen or more times for publicly opposing US wars of aggression, describing his Vietnam experience as “condemning (young men sent to fight) to their (physical or emotional) death.”

In his book, he said the following:

“I wanted people to understand. I wanted to share with them as nakedly and openly and intimately as possible what I had gone through, what I had endured.”

“I wanted them to know what it really meant to be in a war, to be shot and wounded, to be fighting for my life on the intensive care ward, not the myth we had grown up believing.”

“I wanted people to know about the hospitals and the enema room, about why I had become opposed to the war, why I had grown more and more committed to peace and nonviolence.”

“I had been beaten by the police and arrested twelve times for protesting the war, and I had spent many nights in jail in my wheelchair.”

“I had been called a Communist and a traitor, simply for trying to tell the truth about what had happened in that war, but I refused to be intimidated.”

Master of oral history, Chicagoan Studs Terkel (1912 - 2008) explained there was nothing good about WW II, mischaracterized as the good war.

In his book titled “The Good War: An Oral History of World War II,” he said it was good that America “was the only country among the combatants that was neither invaded nor bombed. Ours were the only cities not blasted to rubble,” adding:

The bad was it “warped our view of how we look at things today (seeing them) in terms of war,” and the notion that they’re good or why else fight them.

This “twisted memory….encourages (people) to be willing, almost eager, to use military force” instead of going all-out to avoid it.

In the nuclear age, wars are “lunatic” acts, these weapons likely to be used one day when other means aren’t considered enough to triumph over another nation.

Trump’s 4th of July commemoration will feature militarism over a celebration of world peace.

His so-called Salute to America on Washington’s National Mall will feature a display of the nation’s military might, including flyovers of F-35 stealth warplanes, attack helicopters, and Navy Blue Angel stunt pilots, along with M1A1 Abrams tanks and other hardware on Washington’s street.

Pentagon commanders will stand next to Trump for the display of military might. He’ll be the first sitting US president to deliver a televised address to the nation on the commemoration of its founding.

One estimate suggests the spectacle will cost tens of millions of taxpayer dollars. Preparations have been ongoing for months.

Trump is the latest in a long line of US warrior presidents. What’s planned for the 4th of July in Washington intends to show it, along with a display of the nation’s might.

In modern times, many Americans celebrate the 4th with family, friends, at outings, picnics, barbecues, a day at the ballpark, or other activities far removed from militarism and warmaking.

Trump wants the nation to commemorate the holiday through the prism of the real national pastime — waging endless wars, smashing one country after another, letting the world community know who’s boss.

Long ago, Albert Einstein and philosopher Bertrand Russell warned: “Shall we put an end to the human race, or shall mankind renounce war.”

The notion is rejected by US ruling authorities, risking eventual war to end all future ones because of mass annihilation if the madness continues. 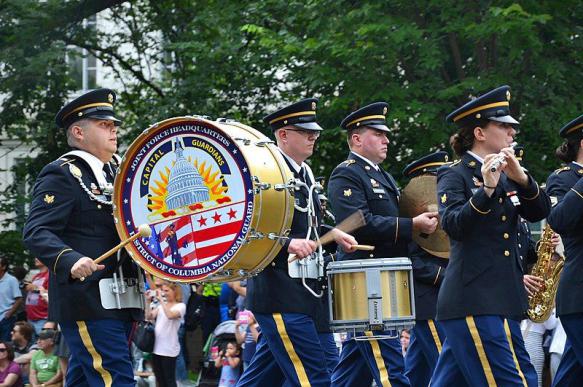