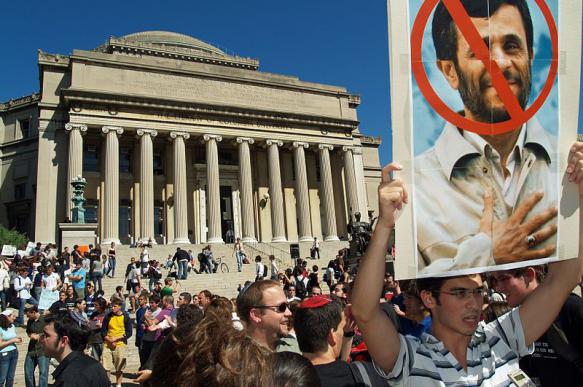 The US considers itself master of the universe, demanding submissiveness from all other nations.

Its bipartisan ruling authorities tolerate no independent states or social democracies like Venezuela, no military or economic superpowers like Russia and China respectively - what hegemonic arrogance is all about, enforced extrajudicially with an iron fist.

Most often, Europe follows Washington's lead, its member states operating as virtual colonies, doing as they're told, their sovereignty sacrificed to a higher power.

When the Trump regime illegally abandoned the JCPOA nuclear deal, Europe followed suit, breaching its obligations like the US.

No matter. These nations demand Iran stick to what it agreed to even though the nuclear deal lets Tehran cease observing its commitments (including its voluntary ones) when other signatories breach theirs.

That's precisely what happened, except for Russia and China. The US, Britain, France, Germany, and the EU agreed to one thing, then walked away from their legal obligations.

Despite increasing its enriched uranium beyond the JCPOA stipulated 360 kg limit/3.67% purity level, Iran remains in compliance with the agreement's provisions.

The US-led West again showed it can't be trusted by breaching what what was pledged to observe.

Its overlord Pompeo, masquerading as a diplomat, operating like a crime boss, warned Iran of "further isolation and sanctions," adding:

Tehran "armed with nuclear weapons would pose an even greater danger to the world." No matter that the Islamic Republic abhors these weapons, doesn't seek them, and wants them eliminated everywhere.

The US, NATO, Israel, and their imperial partners pose an unprecedented menace to world peace and humanity's survival - not Iran, a law-abiding nation threatening no one.

For US and Western policymakers, it's OK for Israel to be nuclear armed and dangerous, to refuse to be a Nuclear Non-Proliferation Treaty (NPT) signatory, to be an IAEA member state without permitting its monitors anywhere near its nuclear weapons facilities.

It's also OK for the Jewish state to maintain illegal stockpiles of chemical, biological, and other banned weapons, to wage war on Palestinians and Syria without declaring it, to be run by fascist extremists, Zionist ideologues, and religious fundamentalists, masquerading as democratic.

All of the above applies to Washington, run by its war party with two extremist right wings, a plutocratic increasingly totalitarian state, a fantasy democracy, never the real thing throughout its history.

No one is allowed near its secret nuclear, chemical, biological, and other banned weapons facilities, monitoring out of the question, including its global empire of bases - used as platforms for endless preemptive wars on nations threatening no one, the supreme high crime against peace.

The US long ago abandoned virtually every international and constitutional law, norm, and standard interfering with its drive for global hegemony, operating by its own rules exclusively, demanding all nations worldwide subordinate their sovereignty to its interests.

That's what the scourge of imperialism is all about, along with smashing nations unwilling to bend to the US master of the universe.

On Sunday, Iranian Deputy Foreign Minister Abbas Araghchi said his government will scale back other voluntary commitments it agreed to observe under the JCPOA in 60 days if Europe remains in breach of the deal.

Britain, France, and Germany responded, demanding Tehran fully honor its JCPOA commitments even though these countries abandoned theirs after Trump pulled out of the deal in May 2018 - breaching Security Council Resolution 2231 adopting the agreement, making it binding international law.

On Sunday, Russia's Permanent Representative to International Organizations in Vienna Mikhail Ulyanov said "(w)e understand  (what) pushed the Iranians to" increase their uranium enrichment - an expected move in response to the Western breach, Tehran acting in a transparent manner.

Urging Iran not to "complicate the situation" further, Ulyanov believes "there is space to continue diplomatic efforts, and they will be continued."

Diplomacy isn't one way, how the US and its go along European partners operate. Resolving differences with Iran requires the West to comply with its JCPOA obligations.

Iran clearly said it will resume full compliance with its voluntary commitments if Europe does the same thing.

The US aside, for the agreement to work, its other signatories must comply with its provisions.

Normalization of Iran's trade with Europe, especially oil sales to its markets, is essential to preserve the JCPOA.

It requires Britain, France, Germany, and the EU to break with the US on this issue, refuse to observe its sanctions, and go their own way independent of its illegal demands.

What hasn't happened so far is highly unlikely ahead. The JCPOA may be doomed because of US-led Western noncompliance.

Enrichment will first be increased to a 5% purity level to fuel the country's nuclear reactors.

Taking these steps is Iran's legal right, what it sacrificed for establishment of the JCPOA.

Trump regime hardliners want the deal eliminated, why it pulled out. They want Iran to resume its (legitimate) pre-agreement nuclear activities, giving them a pretext to push DJT toward war on the country.