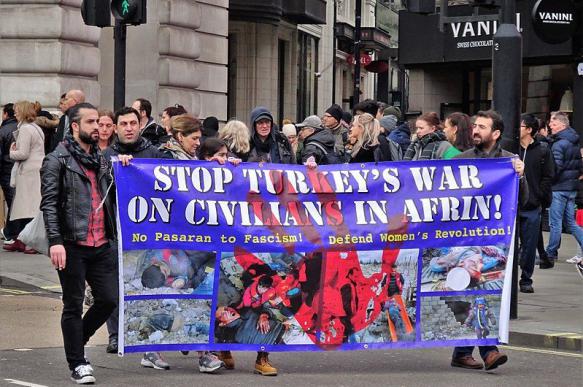 In cahoots with US aggression in Syria, including aid to ISIS and likeminded terrorists, Erdogan is pursuing his long-planned land grab, Russia doing nothing to deter what demands universal condemnation. Press TV, Reuters, the Jerusalem Post, and other media reported that he intends spending $27 billion for constructing scores of villages and 10 towns in northern Syria, including 200,000 residences.

His unlawful land grab involves stealing it from its rightful owners, breaching the country’s sovereignty more than already on the phony pretext of constructing a large scale “safe zone” from the Euphrates River to the Iraqi border. He aims to control 250 miles of northern Syrian territory bordering Turkey, 20 miles deep into its sovereign land. Claiming it’s to resettle one to two million Syrian refugees now in Turkey is a ruse.

Ending aggression by the US and its imperial partners, including Ankara, is the only way to ensure their safety, facilitating their return home. Erdogan turned international law on its head, claiming establishing a cross-border “safe zone” justifies Turkish occupation of northern Syrian territory. Press TV said Turkey’s scheme is to “carv(e) out a patch of land in the Arab country for itself.” Erdogan wants Syrian refugees prevented from returning home to Aleppo and other areas he wants them excluded from — wanting them resettled in territory controlled by the US and its terrorist foot soldiers. He wants northern Syria demographically changed from historically Kurdish to territory housing Turkish-supported Syrian refugees.

The project if undertaken will take years to complete, along with greatly taxing Turkey’s financial ability to pursue it without foreign funding. Reuters said he “called on France and Germany to provide additional financial aid for the project.” In his UN address, he said “I call on all countries to support our efforts regarding Syria” — no matter the flagrant breach of international law. Damascus slammed what it called Erdogan’s “blatant aggression,” a flagrant breach of Syrian sovereignty and territorial integrity — what the UN Charter and other international laws prohibit.

In August, the Trump and Erdogan regimes agreed to establish, “coordinate, and manage the implementation of the safe zone” in northeastern Syria. At the time, a Damascus statement said the unlawful scheme “exposed the US-Turkish partnership in the aggression against Syria, which serves the interest of the Israeli occupation entity and the Turkish expansionist ambitions,” adding: “Syria calls on the international community and the UN to condemn the US-Turkish flagrant aggression which constitutes a dangerous escalation and poses a threat to peace and security in the region and the world and hinders all positive efforts for finding a solution to the crisis in Syria.”

Longstanding US/Israeli plans call for redrawing the Middle East map — partitioning Syria part of the scheme. If implemented, Erdogan’s land grab will make resolution of endless war in Syria more unattainable than already. Russian involvement is key to preserving Syrian sovereignty and territorial integrity, what it stressed numerous times it supports. It involves preventing Turkish annexation of sovereign Syrian territory, what it failed to do so far, and may not to strengthen political and economic ties to Ankara.

Note: On Sunday, Press TV reported that US-backed Syrian Democratic Forces (infested with terrorists) “kidnapped hundreds of people in” northern Syria, adding: “(T)he terrorists continue to perpetrate criminal and abusive practices against ordinary citizens in areas under their control.” Damascus is committed to liberate its territory controlled by these elements. Restoration of peace and stability to the country is unattainable without eliminating their presence, along with ending unlawful US/Turkish occupation of its territory.